What I think about NOMA (not the ex-Red Sox shortstop but the evolution thing) April 13, 2015 Peter Enns

So, I’ve been thinking of NOMA this past week. Probably because the Yankees have been hitting like a high school team (until last night, let’s hope it lasts) and I need to take my mind somewhere else.

And so my mind wound up at NOMA.

and it stands for “non-overlapping magisteria.”

And that means that science and religion are separate “domains” of knowledge where each operates by different rules of inquiry. These “magisteria” do not “overlap” and so the rules of one cannot determine the findings of the other.

In other words, religion can’t tell science what to do and vice-versa.

The idea is debated when you get to details. I have also know Christians to bristle when they see the term, in part, perhaps because Gould was a avowed atheist.

Still, in the Christianity/evolution discussion, Christians are generally happy with half of NOMA: science can’t tell us what to believe. But they are less happy about the other half: the Bible can’t tell science where it is wrong.

From where I sit at the present moment, I think both halves of NOMA are right. I never use the term in The Evolution of Adam

, but in retrospect the idea sits pretty comfortably in the background of the whole book.

The various branches of modern science have made tremendous advances in our understanding of cosmic, geological, and biological evolution. We know a lot. Far from everything, as any good 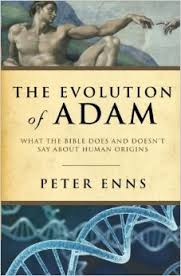 scientist will readily admit, but a lot.

But when scientists conclude from their work that a higher power does not exist, or that this or that religious tradition is not “true,” they have overstepped their bounds, because spiritual reality is not subject to the rules of scientific inquiry.

Faith is a different kind of “knowing.” People are free to reject faith, of course, but to do so on the basis of the lack of scientific corroboration for God is precisely the problem NOMA speaks against.

And zeroing in on the Bible and saying that science has “disproven” Genesis displays ignorance of nature of biblical literature, assuming that it can and should be evaluated by the rules of scientific inquiry.

Christians mirroring these missteps when they dismiss evolution on the basis of its alleged incompatibility with “biblical teaching.”

By pitting the Bible against science, they are–ironically–making the same mistaken assumption of pitting science against the Bible. They assume that the two are alternate means of describing origins (they are) and therefore both are subject to the same rules of evaluation (they aren’t).

Pitting one against the other like this is what I call COMA, “completely overlapping magisteria.” Both sides insist that these two alternate “narratives” of origins can be evaluated by the rules that operate for their own field–scientists imposing scientific expectations onto the Bible and biblicistic Christians imposing the Bible onto science.

But Christians have understood, since at least the days of Augustine (354-430 CE), that the Bible simply isn’t set up to address scientific matters, and to think that it does betrays an unfortunate ignorance about the nature of the Bible.

It is a disgraceful and dangerous thing for an infidel to hear a Christian, presumably giving the meaning of Holy Scripture, talking nonsense on these [cosmological] topics, and we should take all means to prevent such an embarrassing situation, in which people show up vast ignorance in a Christian and laugh it to scorn. (Augustine, The Literal Meaning of Genesis

That “disgraceful” treatment of Genesis is even less excusable today than in Augustine’s day. The Bible and science have grown further apart.

We don’t know everything, but we certainly know a lot more about (1) how the universe works, and (2) how ancient stories of origins work, and none of those we read outside of the Bible are in any way “historical” by any commonly accepted sense of the term.

To think that the Bible is somehow immune from its ancient cultural influence is more a blind assertion that a reasoned argument, and it contributes directly to the persistent mess which is the unfortunate, ongoing debate over evolution among more literally minded Christian readers of the Bible.

Back to NOMA. It makes sense to me. For me to think differently, I would need to see either (1) where the Bible has contributed to a scientific knowledge of origins, or (2) where scientific inquiry has been able to bring to light evidence for or against the numinous.

And I think, by definition, neither of those things can happen. Biblical literature doesn’t contribute to scientific knowledge; scientific inquiry cannot evaluate spiritual experience. They don’t overlap.

If you think differently, please feel free to chime in. But be nice about it. This issue tends to generate a lot of heat. Mean, abrasive, combative comments will be blocked.

April 20, 2015 Jesus and the delay of the Second Coming: maybe he doesn't want to be seen with us
Recent Comments
84 Comments | Leave a Comment
Browse Our Archives
get the latest from
Evangelical
Sign up for our newsletter
POPULAR AT PATHEOS Evangelical
1