On Creation and Killing Canaanites: One Simple, Hardly Worth Mentioning (but I feel that I should) Thought

April 28, 2013 by Peter Enns
2 Comments
On Creation and Killing Canaanites: One Simple, Hardly Worth Mentioning (but I feel that I should) Thought April 28, 2013 Peter Enns

In recent months, these two issues–creation and Canaanite extermination–have been among the more heat-producing that I have dealt with on this blog. Today, I want to make one simple point that concerns both of these issues, and others like it.

Nothing creative or profound. Pretty standard stuff, actually, though when push comes to shove (literally) in controversial issues, it is often the first we lose sight of.

So, when the debate is about whether Christianity and evolution can co-exist, the conversation often turns immediately to the very interesting canonical, theological, and philosophical factors that arise for Christianity if evolution is true and there is no first couple.

Of course, these factors are vitally important, must be brought to the table, and require our full attention. But far too often these factors are raised in happy isolation from the historical/literary factor of the ancient Near Eastern context that gave us these texts–as if the conversation can simply proceed without considering what the Adam story is doing from the point of view of an ancient mindset.

Seeing Genesis as an expression of ancient theology, asking ancient questions, and giving ancient answers, would necessarily reframe theological discussions of origins that are otherwise too commonly locked in abstractions and categories of thought that have little to no grounding in the biblical narratives themselves.

Put another way, when I see discussions of how or whether biblical Christianity and evolution can co-exist but that leave to the side how these ancient texts functioned in antiquity, I get nervous.

The same idea hold for Canaanite extermination (and here). At least as much as creation, this topic often leaps

immediately to what we think God can, can’t, should, would, or must do, based on alleged immutable starting points: his character, holiness, righteousness, etc.

Again, all fine and good, but when we look at the Canaanite genocide stories within the ancient context in which they are written, speculations of God are tempered.

Once we see that Yahweh’s actions toward the Canaanites are like that of the gods of other nations toward their enemies, the discussion cannot continue as before. A vital historical contextual factor is brought into our speculative theological and philosophical musings.

We can talk about God’s actions toward the Canaanites within the parameters of the canon or carefully worded categories of dogmatics and systematic theology. But once we see that Chemosh, god of the Moabites, tells king Mesha (or better, Mesha tells us what Chemosh told him) to take Nebo from the Israelites and “put to the ban” the entire population–and that the word “ban”  corresponds precisely to the Hebrew word for the same sort of behavior–well, it puts the theological and philosophical discussion on a whole different level.

So, the question, “Why would God command the Israelites to exterminate the Canaanites?” cannot be addressed in an intramural theological back-and-forth. It must also include this little bit of historical information: Yahweh’s actions are not unique but seem part of an ancient way of thinking.

Maybe that’s the best way to sum up what I’m saying here: theological discussions about biblical interpretation must be in conversation with ancient ways of thinking.

Told you. Not very profound. But then again, I feel like I need to keep saying it. 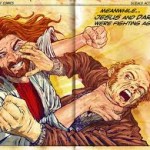 April 26, 2013
Science, Faith, and Academic Freedom: notes from a conference
Next Post