Science, Faith, and Academic Freedom: notes from a conference 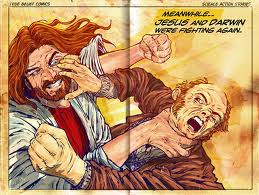 I was in Ohio (pronounced o-HI-o) earlier this week. I hadn’t been there since 2005 when my son and I drove out to visit Kenyon College. After the second trip we decided 8 hours was too far, and that he should go to school in Vermont, a mere 6 1/2 hours away.

Anyway, Ohio is still too far, but what drew me back was an invitation to speak at the Thelma Fordham Pruett Conference on the Academy and Religious Faith on the campus of the University of Dayton and sponsored by First Baptist Church. I flew this time–though connecting through Atlanta at the start of the air traffic controller furlough was an adventure.

I met some wonderful people–some of whom have lived (or are now living) through the conservative politics that have been on everyone’s radar screens the last couple of years. Perhaps best know of these is Michael Pahl, who was terminated less than one year after his move from Canada to Cedarville University for violating their doctrinal statement in his wonderful book The Beginning and the End: Rereading Genesis’s Stories and Revelation’s Visions

. Apparently, by exploring historical, literary, and theological avenues, Pahl did not hold on tightly enough to the scientific and historical accuracy of Genesis.

With those sobering echoes in the background, I had an absolutely wonderful time meeting people who have already come to peace with evolution and who were eager to explore their faith more deeply. I was also privileged to speak with some who walked away from the faith because of fundamentalist “answers” to evolution, but who may be on the way back.

I was asked to speak specifically on the tensions between religious faith and academic inquiry drawing on my own experience at Westminster Theological Seminary–especially given the parallels with nearby Cedarville University. I was more than happy to do this, not to focus on my own experiences per se, but for a chance to speak about the “culture” of WTS that I feel reflects a larger phenomenon.

Here are my main bullet points:

1. The theological tensions at WTS that I experienced–and that can be seen whenever theological differences have erupted–was not simply a matter of theological disagreement but a violation of social identity. When disagreements quickly morph to emotionally charged tensions, often at work beneath the surface is a fear of losing the narrative cohesion that group identity affords.

2. WTS’s roots are in 19th century Princeton Theological Seminary, which was both staunchly Calvinist and

3. Well-know theological shifts toward liberalism at PTS in the late 19th and early 20th centuries, which led to the founding of WTS in 1929, can be understood as a response to academic challenges to Princeton’s theology. Three of those academic challenges were: evolution, European biblical criticism, and biblical archaeology. The three converged within about 20-30 years of each other, and each was deemed intellectually compelling by mainstream scientists and biblical scholars.

4. All three of these factors quickly undermined inerrancy by casting doubt on Scripture’s historical trustworthiness.

In other words, academic factors began to challenge PTS’s narrative of academic and spiritual harmony. Social identity was threatened.

6. The question to ask is whether PTS or WTS was able to maintain the older harmony, and whether these two paths represent the only options available for all subsequent generations.

7. Though considered permanently settled by some, the issues mentioned above in #3 continue to come up within American Fundamentalist and Evangelical circles. The reason for this recurring questioning of allegedly settled positions is that these issues have clearly not been adequately addressed intellectually but only kept at bay so as to safeguard the narrative coherence that strong social identity provides.

8. The Princeton/Westminster saga has had a palpable effect on the Evangelical and Fundamentalist landscape, at least in America, for several generations. Attempts to address those issues with fresh eyes are not tolerated in academic or ecclesiastical communities whose social identities are connected to this history. Hence, there tends to be very little genuine discussion of intellectual/academic matters when social identity is threatened.

9. Academic inquiry and Christian faith will continue to be in tension in these types of institutions, resulting in forced and/or voluntary departures, unless there is genuine willingness to create alternate cultures where change and innovation can be discussed at length and without threat of reprisal, and where such conversations are not seen as threat to a tradition but as the very necessary means by which a tradition can be maintained and still remain vibrant and viable. This leads, though, to a deeper question–whether creating such alternate cultures is itself intolerable within the parameters of social identity of Evangelicalism and Fundamentalism.

All comments are welcome–pro, con, or neutral–provided they are respectful and genuinely engage the post or a comment on the thread. Badgering comments will be deleted. Grandstanding and lecturing will be tolerated to a point, but if it gets out of hand, let me suggest you start your own website like I did. Also, rest assured I read every comment that is posted. I learn something new from many of them–pro and con–as I’m sure others do, too. I wish I could respond more, and I will as time allows.

April 24, 2013
An Ancient Bible Gives You Ancient "Science," Not Modern. (I wish we didn't have to keep saying that.)
Next Post

April 28, 2013 On Creation and Killing Canaanites: One Simple, Hardly Worth Mentioning (but I feel that I should) Thought
Recent Comments
0 | Leave a Comment
Browse Our Archives
Related posts from Peter Enns