has science vindicated those nasty Samaritans? looks like it.

I knew I should have paid more attention to biology class in high school. “You never know,” mom said. “One day you might grow up to be a biblical scholar, and someone might publish a scientific paper that intersects with your own field and you might want to be able to understand it.”

A friend sent me a link an article, made available through Human Biology Open Access Pre-Prints at Wayne State University, entitled “Genetics and the history of the Samaritans: Y- chromosomal microsatellites and genetic affinity between Samaritans and Cohanim.”

No, I didn’t actually read it. (You really need to ask?) It would be casting pearls before swines.

It took me 45 minutes of Googling to understand the title. And then there are section headings like, “Denaturing High-Performance Liquid Chromatography and Electrospray Ioniza- tion Quadrupole Ion Trap Mass Spectrometry” and “Genotyping of Y-Chromosome Single-Nucleotide Polymorphisms.”

The only section titles I got were “Introduction,” “Discussion,” and “DNA Sequencing,” the latter of which I take it has something to do with the sequencing of DNA (although, if push comes to shove, I don’t really know what DNA is, other than it’s really, REALLY important for life and such).

Most of the article also uses words I never heard of and syntax I never use, like:

The mass accuracy necessary to detect a shift in mass due to an A>T mutation in a 100-mer single-stranded sequence (molecular mass of approximately 31,500) has to be at least 0.014%, which is the standard accuracy of the ion trap mass spectrometers used in this study. As the sizes and molecular masses of all STRs but one, namely DYS426, exceeded 100 base pairs, A>T or T>A mutations might have gone undetected. Still, several single-nucleotide sub- stitutions within and, in particular, flanking the microsatellite sequence, resulting in mass shifts of 15 (G>A) and 24 Da (A>C or C>A), respectively, were detected (Supplemental Table 3). Use of more highly priced time-of-flight mass analyzers would have afforded detection of any single base exchange in nucleic acids with sizes up to 250 nucleotides (Oberacher and Parson 2007).

I literally could have randomly cut and pasted any section of this paper and it would have been no more or less comprehensible. Then throw in A LOT of graphs and tables like these, 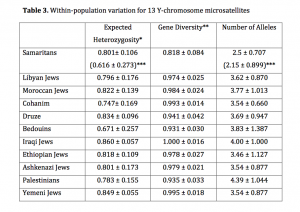 So why bother our little heads over this article?

Because it’s about the Samaritans we read about in the Bible. (Yeah, science.)

The history of the Samaritans–who they were and where they came from–has been a pretty controversial since forever. Ever since biblical times, animosities were high between Samaritans and ancient Judeans over whether the former had to right to lay claim to Jewish identity (e.g., Luke 9:51-56; John 4:1-42, esp. vv. 7-9, 20).

The Samaritans always came up on the short end of that argument (i.e., the winners write the history).

After 2 millennia of encrusted anti-Samaritan sentiment, this article gives scientific support to the idea that today’s Samaritans are closely related genetically to Jews and not descendants of other peoples that the Assyrians imported to the northern kingdom of Israel after the fall of Samaria in 722 BCE. As the (largely readable) abstract puts it (money quote in bold, extraneous sciencey stuff struck through),

The Samaritans are a group of some 750 indigenous Middle Eastern people, about half of whom live in Holon, a suburb of Tel Aviv, and the other half near Nablus. The Samaritan population is believed to have numbered more than a million in late Roman times, but less than 150 in 1917. The ancestry of the Samaritans has been subject to controversy from late Biblical times to the present. In this study, a sample of 12 Samaritans chosen to have as low a level of relationship as possible, and 461 Jews and non-Jews. Estimation of genetic distances between the Samaritans and seven Jewish and three non-Jewish populations from Israel, as well as populations from Africa, Pakistan, Turkey, and Europe, revealed that the Samaritans were closely related to Cohanim. This result supports the position of the Samaritans that they are descendants from the tribes of Israel dating to before the Assyrian exile in 722–720 BCE.

If you wind up reading the article, understand it, and feel the urge to email me to explain the sciencey stuff, please resist that urge. I’m fine with the bottom line.

February 11, 2015
my thoughts about thinking about violence in the Bible: a counterpoint
Next Post 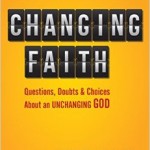