Jesus Himself Would Have Bought a Ticket and Waited on a Half Hour Line to See Les Miserables. 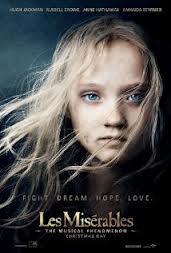 If you’re not the church going kind of person, or if you were but left because Christians are fake and self-absorbed, or if your main exposure to Christianity has been TV evangelists or the Tea party, you ought to see this movie.

Les Mis will help you see what the Bible means, and what the church at its best has meant, by “good news.”

Sacrifice of self for the salvation of others.

Don’t get hung up in the word “salvation.” In the Bible, “salvation” is a multi-use word, but it doesn’t mean escaping this world to get to heaven. Very often “salvation” means God’s deliverance of the downtrodden, the oppressed, those caught in the machine of politics and wars.

If you’re skeptical, search a Bible index for how “salvation” and “deliverance” are used in the Old Testament. Then read the story of Jesus’ birth in Luke 1 and take note of what kind of “salvation” Mary and her brother-in-law Zechariah expect from this child (especially in Luke 1:51-53 and 69-71). Then read the Gospels and take note of what Jesus does do and how the marginalized of society are the ones attracted to him, not the powerful and privileged.

That doesn’t cover all the bases in the New Testament for how “salvation” is understood, but it’s a dominant meaning that is overlooked far too often. This kind of “salvation” may not sound spiritual enough for some, but that’s their problem and they need to take it up with God.

Salvation is God coming to rescue the suffering through those who say they are children of God. And children of God are those who, as Jesus taught, have replaced self-centeredness with self-sacrifice, who have lost their lives so they could find it, who have died to the ego so that they can truly live.

This is what Jesus modeled for his followers, and this is what a life lived in God’s presence looks like.

Les Mis is a story of those who, through personal torment and pain, die (literally and figuratively  to save others. Fantine gave up her life–first as a factory worker, and then literally–for her daughter Cossette. Valjean gave his life by taking Cossette in as his own daughter and protecting her from harm.

The only part I was a little disappointed in was Valjean’s death scene. The

apparition Fantine sings to him, encouraging him to let go and move on to a place where chains will no longer bind him. But I think Eponine needed to come in and sing harmony with Fantine, as she does in the Broadway version.

Even though in the book

Eponine has very little to do with Valjean, in the musical she is another key Christ-figure. Rather than scheming to keep Marius for herself, Eponine lays down her own life (figuratively then literally) so that Marius and Cossette could have theirs, letting go of her self-interest even when every bit of her wanted to do the opposite. She, along with Fantine, needed to be there to usher Valjean into his “salvation.”  (In the movie, that honor is given to the bishop, played by Colm Wilkinson, who played Valjean in the original Broadway cast.)

I harp on this because the very last line all three sing summarizes the entire story:  “And remember the truth that once was spoken: ‘To love another person is to see the face of God.'” You see the face of God in all three, though in different ways.

The “truth that once was spoken” is 1 John 4:11-12:  11Beloved, since God loved us so much, we also ought to love one another.12 No one has ever seen God; but if we love one another, God lives in us, and his love is perfected in us.

“Seeing” God in the conventional sense of the word doesn’t happen. The closest you get to “seeing” God is by living the love of God, a life of dying to self, a life of giving of oneself even at great cost. And that way, others see God in you.

Love others so that others will see God through you. “Les Miserable” is a reminder of this truth, which is both an unnerving and deep mystery and also as simple and concrete as one can get.

December 27, 2012
What do Turkey, Bethlehem, and Tennessee Have in Common? They Don't Bode Well for the Conservative Christian Subculture
Next Post

Evangelical
What We've Got Here is a Math Problem:...
Peter Enns

Evangelical
The gospel according to the Gospels: It's not...
Peter Enns

Evangelical
"What is the Gospel?" Good Question (and chances...
Peter Enns
TRENDING AT PATHEOS Evangelical