The Most Sobering Verse in the Bible (at least for me)

The Most Sobering Verse in the Bible (at least for me) February 20, 2013 Peter Enns

I became a Christian in high school. The pastor said some things about hell, and I was sure I didn’t want to go there. Jesus, I was told, was standing by ready to get me out of that, as soon as I gave him the go-ahead.

A few years later I caught wind of the fact that there was more to it. Jesus wasn’t a get-out-of-hell free card.

Paul put it this way–and when I first began to see the point, I couldn’t help but notice that none of this was in the brochure:

I want to know Christ and the power of his resurrection and the sharing of his sufferings by becoming like him in his death (Phil 3:10).

I learned in seminary that the first “and” is what we call in the business “epexegetical,” or explanatory. To get the gist, replace the first “and” with “in other words.”

Paul doesn’t want to know three things: Christ, the power of his resurrection, and sharing Christ’s suffering. He is saying that knowing Christ means those two other things. Or, if you prefer, without both of those other things–the glory and the humiliation, the heights and the depths–there is no “knowing Christ.”

Glory and humiliation. Not a formula for getting saved from hell, but a pattern of life modeled by Jesus and destined for his followers.

Experiencing in our daily journey the same power that raised Jesus–but, only if we are also willing to accept the other side of the coin, deep suffering. This is why suffering is a normal state of affairs for followers of Christ. If you feel like you can’t go on, you’re on the right track. Dying and rising. A sobering paradox.

Elsewhere Paul said that being a follower of Jesus means you’re dead and your life is “hidden” with Christ in God; or you have been crucified with Christ and thus no longer technically alive. Jesus talked about taking up your cross daily and following him; or dying to oneself

Dying. Crucified. Hidden. Had I known, I might have thought about it a bit longer.

No, this was definitely not in the brochure. What would it look like if we put this idea right out there at the beginning? “Hi neighbor, I’d like to invite you to church with me. The pastor is wonderful and the people are friendly…though, there is this other matter you probably ought to know….”

I imagine no one is drawn to the idea. No one really wants to “die” the way the gospel tells us to. I’m still getting used to the idea myself.

February 18, 2013
The Most Frightening Verse in the Bible (at least for me)
Next Post 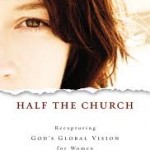 Evangelical
the Bible is like clay to be molded...
Peter Enns

Evangelical
a long lost letter back to Paul from...
Peter Enns
TRENDING AT PATHEOS Evangelical