Reading the Old Testament: You Gotta Have Attitude

How one gets from then to now has in my experience proved to be a complex interpenetration of factors both obvious and subtle. But to speak of the significance of a biblical book is to say that the setting of the interpreter (whether individual or community, however defined) presents itself as an influential factor in interpretation.

The Bible does not have contemporary “significance” for anyone apart from a conceptual framework within which one makes sense of anything. This certainly entails one’s individual time and place in world history. But for Christians, that conceptual framework is centered first and foremost not on our particular or personal life-settings, but on the gospel, which is to say on what God has done for his people and the world in and through the person and work of Christ.

Rather, the gospel forms our basic “attitude” toward the Old Testament–a “hermeneutical posture,” which is that point of view from which we read and by which the Old Testament can be accessed. It is to acknowledge that the very questions we raise, the very way in which we interact with the Old Testament, is profoundly shaped by our having been raised and united with the crucified and risen Christ.

It is, in my view, precisely a failure to recognize this vital hermeneutical posture that has fostered the notion that a faithful, Christian reading of the Old Testament is demonstrated by deriving some immediate moral lesson—an approach that can drive one to ignore, brush aside, or actually mishandle the Old Testament. Our outlook must rather be shaped by the knowledge that, on the one hand, the Old Testament has something to say in its own right, and, on the other hand, how we hear it will be shaped in a most fundamental way by our living in the privileged setting of the post-resurrection cosmos.

All this is to say that any Christian interpreter of any Old Testament book must purposefully endeavor to allow the two horizons of then and now to be in conversation with each other. And they must be in conversation. The gospel allows–even demands–that we not level out the challenging peaks and valleys of the Old Testament. The Christian hermeneutical conversation embraces both Israel’s story as such and the powerful and liberating realization that we are living in the age of the inaugurated eschaton.

It is from this final, climactic stage in the drama of redemption that we now look back and say, “Now that we know where Israel’s story ends up, what difference does that knowledge make in how we understand that story?” In other words, the “now” with which the “then” must be in conversation is not primarily the “private now” of my personal experiences (although the person dimension is certainly in play), but with the “eschatological now” of the new age (2 Cor 6:2) that dawned when Christ, the climax of God’s covenant with Israel, was crucified and raised from the dead.

Only when this “attitude,” this eschatological posture, is allowed to exert its proper force do we as Christians bring the Old Testament to bear on the particular circumstances of our individual and corporate lives.

” reading. Rather than looking for Christ “in” a book of the Old Testament, Christ is seen as the climactic end (Greek telos) of Israel’s story, which is the vantage point from which we today engage the Old Testament.

Think of you engage a well-told tale in a good novel. The first time through you let the story hit you as the plot unfolds and the characters develop. Then when you get to the climax of the story, the various peaks and valleys of the previous chapters begin to be seen in light of the whole. The end of the story does not render those chapters null and void, merely a prop to bring you to the end. But now, having read the story once and seen where it winds up, you go back and read it again in view of a grander horizon.

A theological reading of the Old Testament for the church is ultimately a synthesis of the first and second reading. Its own prominent peaks and valleys must be allowed to shape our hermeneutical landscape, while we recognize at the same time bearing in mind that there is another, grander landscape beyond the immediate horizon, against which the Old Testament can be seen in a different light.

In other words, Christians read the Old Testament both respecting what it has to say while also seeing that there is 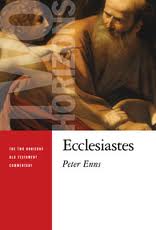 Today’s post is adapted from my concluding comments in the introduction to my commentary on Ecclesiastes, Eerdmans, 2011, pp. 27-29.

April 15, 2013
What is "Evolutionary Creation"? Let Denis Lamoureux Tell You (he wrote the book)
Next Post

Evangelical
get to know me: my approach to interpreting...
Peter Enns
TRENDING AT PATHEOS Evangelical