Did biblical writers understand their past? (Mark Smith part 2)

Today’s post is based on another idea I found interesting in Mark S. Smith’s article “God in Israel’s Bible: Divinity between the World and Israel, between the Old and the New.” The meat of it gives an overview of the evidence for the “early history

” of Israel’s God Yahweh according to the biblical and extrabiblical evidence. The article is published in the Catholic Biblical Quarterly (issue 74, 2012). My first post on this article is here.

Like most (all?) biblical scholars, Smith considers Judges 5 and Psalm 68 to be among the oldest writings of the Israelites contained in the Bible. They depict Yahweh as a divine warrior of old, who marched up from the south, with the earth quaking and the rain pouring, to battle for his people, Israel.

Smith’s point is that, even though these are the oldest texts we have in the Bible, they still do not take us back to 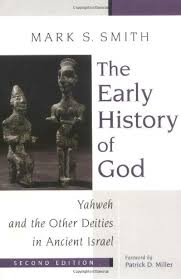 the origins of Israel’s belief in Yahweh as their God. That information is hidden from scholarly gaze. And on that point, Smith makes the following observation, that the “early history of God” was hidden from the writers of the biblical texts, too.

Our ignorance [of the early history of God] is an important datum. In this aspect, Israel’s God—and ours—is something of a mystery to us. Like modern scholars, the Israelites who composed these relatively early pieces worked with a certain ignorance of their own about the original profile of their God. In fact, their understanding of God, which may have included a lack of knowledge of the old profile of their God, was sufficient for them. It may have been the very mystery about these old depictions that made them all the more attractive to later tradition. Moreover, for the biblical composers, the truth of God in the prior time was not merely subordinate to the God as known in their present; the present understanding of God from the composers’ perspective was presumed to be consonant with this prior profile, whatever was known of it. The truth of God for the religious tradition of Israel did not depend on full knowledge of origins. It is tantalizing to search for and discover new evidence for anything of interest, and especially for evidence of origins. Furthermore, learning about origins may contribute to the tradition. At the same time,  for the biblical tradition, the order of the human discovery of God is not the order of the reality of God for humanity. The early biblical tradition formulates its understanding of this old inherited tradition of God in terms of its own concerns, as seen in the Bible’s first glimpses of God in Judges 5 and Psalm 68. (10-11)

Translation: The earliest Israelite writers wrote of God from the point of view of their experiences of God in their time and place without a fuller historical understanding of how those present beliefs had developed from murky and ancient origins (see also here and here).

Perhaps it is important here to take to heart Smith’s own cautionary comment: the deep past remains a mystery to us. Smith and others are left to fill in the gaps on the basis of the available, later, data.

However you might feel about how Smith depicts the specific issue of Yahweh’s origins, how does the general idea strike you–that biblical authors assumed that their present point of view was a “historical constant,” how things are is how they have always been?

What we’re dealing with here is the age old problem of anachronisms in the Old Testament–things that are out of time and place. We have other, perhaps better known, examples:

Of course, things like the Hebrew language and Philistines might not be that crucial an issue compared to the early history of God, but the idea of anachronisms is common enough to at least put all this on the table.

Biblical writers wrote from where they were at the moment–how they saw themselves, the world, and their God. Whether that understanding reflects the past “accurately” (at least from the point of view of modern historical studies) is another question.

For serious students of the Bible, this question cannot be avoided for long.