I hope I’ve read Leithart accurately here. Truth be told, after several readings of his post, I was still not entirely sure where satire gave way to direct critique.

But Leithart’s feelings about historical criticism are not hard to piece together. This is not the first time he has vented on the topic. His review of The Evolution of Adam (here) and The Bible Tells Me So

(also in First Things), among others, struck the same tone.

Each time I come away thinking, “Seriously? How can such an otherwise intelligent man and prolific mind persist in full-court press reactionary mode?”

Historical criticism of the Bible takes many shapes and forms and utilizes various approaches, all of which are focused on interpreting scripture in its historical contexts in light of widely documented and undeniably relevant–what shall I call them?–facts, data, evidence–concerning antiquity.

Also inescapably relevant are scientific advances, which include but are not limited to astrophysics, geology, and biology, but which Liethart also seems to judge in a negative light when applied to biblical interpretation.

But historical criticism is embraced among Jews, Catholics, and Protestants–not because they are blinded by unbelief, lack theological sensitivity, or willy nilly cut themselves loose from their precritical moorings, but because historical criticism has tremendous explanatory power and has helped us understand the Bible and explain some nagging questions that have disturbed interpreters ever since there was a Bible.

Yet Leithart seems to see past all this, wondering all the fuss is about.

To be sure, historical criticism is not beyond criticism, not simply with respect to certain conclusions but also when it claims absolute “hegemony” (to borrow a frequent term of Walter Brueggemann

So to sound a note of distain and exasperation–even condescension–as Leithart does is out of place and rests on a caricature of what he sees as an outside observer of biblical studies.

At any rate, what about Leithart’s post, entitled “The Abraham Myth”?

Leithart’s concern is a familiar one that surfaces sooner or later whenever the mythic nature of Adam is on the table: if Adam is mythic, what is to keep the rest of Genesis from being mythic, too? His aim is to launch a counterattack on evangelical capitulation in allowing science and biblical studies to affect biblical interpretation.

A fair topic of conversation, no doubt, but Leithart’s piece is hardly a constructive engagement of issues that most others would consider rather pressing–or at least worthy of a serious intellectual exchange.

In that respect, rather than offering a solution, Leithart’s position exemplifies the perpetuation of the very problem that many others are trying to address: how can we engage compelling evidence rather than keeping it at arm’s length?

I see in Leithart’s post three lines of attack against a positive answer to this question.

First is the insinuation that historical criticism is chronological snobbery.

It can be and has been, but historical criticism is not de facto guilty of chronological snobbery by claiming that relevant evidence affects how we understand the Bible.

Engaging seriously with the Dead Sea Scrolls, Second Temple Judaism, or the vast amount of historical information from the ancient Near East and letting that engagement affect one’s interpretation of the Bible and therefore one’s theology is not chronological snobbery but responsible interpretation.   It is chronological snobbery to ignore the data we have in favor of one’s preferences.

Which brings me to a more important point: any and every hermeneutical strategy is legitimately open to the charge of “chronological snobbery.” Leithart’s included. Perhaps more so.

The conservative Presbyterian denomination (PCA), with it’s mixture of Puritan Calvinism and 19th century Princeton theology, is the denomination that ordained Liethart and to which he is fully committed. When that paradigm, implicitly or explicitly, is elevated to the level of “proper” framework for biblical interpretation, chronological snobbery is alive and well.

(“No it’s not. It’s simply the most consistent form of biblical Christianity out there.”

Any claim of hegemony for any theological tradition rooted any era, past or present–whether the early church, medieval Catholic theology, or any of the multitude of Protestant Reformation traditions–is “chronological snobbery.” The only difference is the time period in which one wishes to pitch his or her hermeneutical tent.

To be clear, I am not remotely suggesting that the modern period is “best”–even if it does answer many questions in a compelling manner–and we can safely ignore the past! I really do aim at a “broad orthodoxy”–by which I mean listening to the voices of the past and present to discern our theology.

Which is precisely my point. Leithart can no more demonize the present as historical critics can demonize the past. This isn’t about an either/or choice, but exercising learned and wise discernment, bringing various horizons into conversation.

So when people conclude that the Adam story is not historical, that conclusion may come as a result of lengthy deliberation, being swayed by the need to consider all factors before us.

We actually have no choice but to engage constructively the period we are in. Neither Leithart nor anyone else can do theology as if the modern world never happened.

Slippery slope arguments–at least when phrased this way–are unbecoming of learned discourse. Their use suggests a failure to appreciate details and subtleties of previous discussions.

For one thing, to label as “myth” the type of reading of the Abraham narrative that Leithart takes issue with is the wrong designation and obscures matters.

Even though the literary styles of Genesis 12 and chapters 1-11 are consistent with each other, thus suggesting one narrative, their content is quite different, which is why biblical scholars don’t call the Abraham story “myth” but something else–like legend or political propaganda.

In other words, what holds for the Adam story may or may not hold for the Abraham story.

Whatever term is used, however, the Abraham story does indeed signal that there is some value in reading the story from right to left, as it were, and not simply with left to right naiveté. 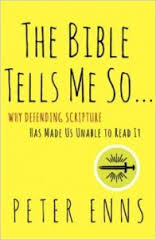 Something other than a “historical narrative” is at work–namely the Abraham story gives a preview of the monarchic period and exile, which suggests (along with other reasons) dating at least the final form of these stories to those periods. (I review some of this entirely uncontroversial issue in The Bible Tells Me So, channeling Gary Rendsburg’s excellent popular essay.)

The preview of the exodus in Abraham’s journey to Egypt in Genesis 12:10-20 (which Leithart mentions) invites careful deliberation, i.e., whether a later period in Israel’s history has shaped its telling of its earlier history. The same for Abraham’s “eternal” covenant (Genesis 17:7) which echoes David’s “eternal” covenant in 2 Samuel 7:29.

Other factors (patiently laid out by Rendsburg) also raise reasonable questions about what it means to read the Abraham story and Genesis as a whole with literary sensitivity and to draw from it historical conclusions (which, of course, are open to revision).

Where one comes down exactly on these issues is not the most important point here. Rather, Leithart’s simplistic “as goes Adam, so does Abraham” argument is off the mark entirely. It is indeed, to use Leithart’s jab, a “fundamentalist distortion.”

Third, co-opting the Abraham story is a bit of a scare tactic–agan, the slippery slope. But Leithart is asking the wrong question.

For the sake of argument, let’s concede to Leithart’s view, that if Adam falls to the level of a-historical story, so might Abraham. But that does not address the very problems  that have led to a-historical readings of the Adam story: evolutionary biology, cultural anthropology, and ANE archaeology.

If Leithart wishes to persuade, he will have to do better than warning us of chronological snobbery and the slippery-slope. He would have to render a compelling argument for why these evidences can and must be ignored in the interpretation of scripture.

We’re not just riffing here. We know things today that affect our expectations of the kind of information the Bible is prepared to deliver. Some of us feel we need to address them. Leithart is content to dismiss them.

A  few years ago I was on panel with Walter Brueggemann, where he was lamenting that historical criticism has proven in and of itself insufficient for the church. But Brueggemann would never say historical criticism was wrong or a bad idea. It was, as Walter Wink put it, the “acid bath” that relieved of us the burden of literalism.

I agree with Brueggemann on both counts, but I also challenged him a bit on this point. Brueggemann’s audience is the mainline church, which is in a reconstructive period in the wake of historical criticism–to work through how the ancient faith speaks through scripture today.

The conservative American church, which Leithart here amply represents, has not gone through the acid bath, but held it at arm’s length, done an end around, or engaged it in piecemeal fashion in an effort to protect precritical dogma. This failure to engage has placed the conservative church in an entirely in-house, self-referential monologue.

Leithart perpetuates this problem in spades. Simply put, he is advocating a precritical, premodern reading of scripture, one that wishes that the last several hundred years had never happened–and to go about as if they didn’t and urging others to follow.

Leithart is an intelligent and educated man. He also offers stimulating and creative (I would call them midrashic) readings of biblical texts that benefit many.

But he has a blind spot–nay, a bee in his bonnet–regarding historical criticism, which is a shame, and he needs to get past it. He doesn’t need to embrace it. Just concede that it makes some good points that can’t be ignored–though I fear I am asking too much of him.

The simple fact is that historical criticism isn’t going anywhere because in some form it is deeply persuasive and cuts across most ideological boundaries on many issues–Adam and Abraham among them.

Leithart is welcome to join that conversation, but he seems to prefer pronouncing casual judgment.

And that is snobbery of another sort.

July 9, 2015
let's talk about sexual purity and evangelical anxiety, shall we?
Next Post