The Old Testament as “fact-fiction” (more from Mark S. Smith)

A few weeks back I posted some thoughts (here and here) on Mark S. Smith’s (Skirball Profesor of Bible and Near Eastern Studies at New York University) presidential address at the Catholic Biblical Association of America meeting in August 2011, which was published in the Catholic Biblical Quarterly the next year (issue 74, 2012).

Here is a third quote from that address.

The revelation of God for the biblical authors did not depend on knowing history fully, whether the history of earliest Israel or that of the earlier background of the motif as seen in Egyptian sources. At the same time, revelation is not claimed to be simply a textual phenomenon; rather, the text shows the view that revelation is a matter of God and people meeting in real time in the past, not only as imagined or fictional time. For the Bible, the story of revelation was located in the history to which the text refers. The representations of the past in the biblical text require a concept of historical truth that is wider than a simple either/or as to whether events actually happened in and only in the manner described. In order to describe what is going on in the Bible, we need a wider bandwidth of historical truth that encompasses both the ancient sense of truth in storytelling and the modern historian’s criteria for truth, perhaps what Laurel C. Schneider has called “a fact-fiction intercourse.” (25-26)

For those who have studied Israel’s past with any seriousness, #1 is self-evident.

#2 is a statement of faith. Many conservatives, including some evangelical scholars, want to affirm #2 without passing through #1. This is when biblical scholarship morphs into apologetics.

#3 bristles with wisdom and commonsense, and promises a compelling way forward for confessing #2 while also coming to terms with #1. 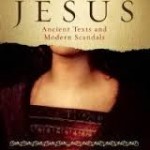 October 28, 2013
Did Jesus have a wife? I wouldn't touch that with a 10-foot shepherd's staff, but I know someone who will
Next Post