John Franke gave a lecture to the Eastern University community yesterday entitled “Progressive Evangelical Theology: Nature, Promise, and Prospects.” If you don’t know who Franke is, please email me the address of the rock you live under and I will make sure you get caught up. Briefly, Franke is the Executive Director and Professor of Missional Theology at Yellowstone Theological Institute in Bozeman, MT and former professor of theology at Biblical Theological Seminary (Hatfield, PA). He’s written several books including Beyond Foundationalism

(with the late Stanley Grenz),  Manifold Witness, and Barth for Armchair Theologians

Anyway, that John Franke spoke at EU yesterday, and he summed up his vision for a theological movement that is both evangelical and progressive (a term he prefers to others like “post-conservative” which he feels is too negative, not constructive).

He brought up a commonly voiced distinction between a progressive and a traditionalist evangelicalism, where the former (1) is marked by holding to a “center” of theology rather than maintaining firm “boundaries,” (2) views the theological task as more of a “dialogue” than arriving at firm conclusions defended at all cost, and (3) encourages a deliberate engagement of voices outside of evangelicalism in order to learn from them, not simply correct them.

Now, whatever you might think of these distinctions, the first one has chimed a clear note in my brain for some time now. Firm boundary marking, once and for all time, in our theological quest tends toward insulation and then isolation from any sort of criticism–which I think is not only self-defeating and intellectually hypocritical, but makes baby Jesus cry.

A theology that thinks in terms of holding to a center encourages theological exploration, with regular returns to the center for a gut check. Now, before you send me emails triumphantly exposing my logical inconsistency, I understand the problem with this spatial analogy, namely, as soon as you define what your center is, you are in effect drawing a boundary. No analogy is perfect.

erecting and maintaining, on pain of death, a solid boundary to keep some in and others out. The latter tends toward a “conceptual idolatry,” as Franke put it: where you draw your boundaries is where everyone else needs to draw them because your boundaries reflect the Absolute Truth of the God, etc.

Now, if you will allow me to get to the point of this post, as Franke was talking, I was thinking of how all this applies to my field of biblical studies.

It seems to me that one way (not the only way) of thinking about the Bible is as a “center” of the Christian faith rather than a boundary. It is that to which followers of Jesus return–sort of like a tether–not the thick and high borders through which we may not blast, under which we may not tunnel, or over which we may not climb.

The character of the Bible is marked by two overlapping qualities that make a “center” metaphor helpful: (1) It is set in various cultural settings and historical moments that most certainly shape the manner in which the Bible speaks, and (2) within the Bible itself there is theological diversity and movement.

The Bible is too flexible and diverse, too encultured and ancient, too much on the move, to give us the bricks and mortar to erect a Great Wall of China around the Christian faith. A “center” metaphor, it seems to me, is more in keeping with not only the character of the Bible but the nature of the Christian spiritual and theological journey we are all on. I would go so far as to say the Bible models such a journey, since at various points the Christian Bible actually deconstructs the “boundary” metaphor by virtue of its diverse theological content and progress over time (yes, progress–ask Paul what he thought about circumcision and dietary restrictions).

As a “center” I do not mean that all parts of the Bible are equally central. Some parts are decentered and left behind; some are transformed as new circumstances arise. But, the Christian journey will always come back to a serious connection to the “central” biblical story–to engage, dialogue, interrogate, or simply rest in it–all in the context of commitment and trust in God.

September 11, 2013
What does the Bible have to say about the crisis in Syria? (hint: nothing. absolutely nothing)
Next Post 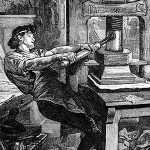 September 16, 2013 So, you want to publish a book, huh?
Recent Comments
92 Comments | Leave a Comment
Browse Our Archives
Related posts from Peter Enns

Evangelical
another juicy quote from Oswald Chambers: "we are...
Peter Enns

Evangelical
the best way of getting out of the...
Peter Enns