the best way of getting out of the whole Canaanite genocide thing, and it comes right from the Bible (but you may not like it)

In past posts (here, then followed up here, here, here, and here) I’ve talked quite a bit about the little problem we have in the Old Testament: God orders the armies of Joshua to kill every single Canaanite so the Israelites can live in their land. Deuteronomy 20 lays this out, and the deed is done in Joshua 7-12.

Most Christians are at least a little bothered by this, and various solutions are regularly put forward to reconcile a good and loving God with the idea of God as a killing machine in the OT—such as:

I go through these sorts of explanations in the links above.

My own approach is simply to acknowledge that the Israelites were an ancient tribal people and thought of God the way other ancient tribal peoples did–as a fierce warrior who goes to battle with his people, assured of victory if they are on good terms with the deity but suffering defeat if not. This biblical portrait of God is already critiqued to a certain extent in Israel’s own writings (e.g., the book of Jonah) and is put to rest in the gospel, where Jesus says we don’t kill people to take their land anymore.

I realize, of course, that not everyone will warm up to that approach because it appears to “not take the Bible seriously.” I would protest that I am in fact taking it quite seriously by allowing the text to speak in its historical context rather than bringing to the text my own agenda or twisting to text to ease theological discomfort.

But I digress. For those seeking a more “biblical” way out of having to accept that Israel’s God was an ancient version of Megatron, these passages, straight out of the Bible, may suggest a way forward.

27 I will send my terror in front of you, and will throw into confusion all the people against whom you shall come, and I will make all your enemies turn their backs to you. 28 And I will send the pestilence in front of you, which shall drive out the Hivites, the Canaanites, and the Hittites from before you. 29 I will not drive them out from before you in one year, or the land would become desolate and the wild animals would multiply against you. 30 Little by little I will drive them out from before you, until you have increased and possess the land. 31

24 Do not defile yourselves in any of these ways, for by all these practices the nations I am casting out before you have defiled themselves. 25 Thus the land became defiled; and I punished it for its iniquity, and the land vomited out its inhabitants. 26 But you shall keep my statutes and my ordinances and commit none of these abominations, either the citizen or the alien who resides among you 27 (for the inhabitants of the land, who were before you, committed all of these abominations, and the land became defiled); 28 otherwise the land will vomit you out for defiling it, as it vomited out the nation that was before you.

22 You shall keep all my statutes and all my ordinances, and observe them, so that the land to which I bring you to settle in may not vomit you out. 23 You shall not follow the practices of the nation that I am driving out before you. Because they did all these things, I abhorred them.

In Exodus 23, it looks like a pestilence of some sort (famine? locusts?) by God’s hand is what will drive out the Canaanites: it will throw them into confusion and so they will turn their backs on the Israelites. This process, we are told, will happen gradually. But note there is no word of annihilating the Canaanites by war.

In Leviticus, we see another side to all this. Note the use of the past tense in these passages. Even though these words from God are spoken on Mt. Sinai, i.e., before Israel entered Canaan 40 years later, the expulsion of the inhabitants of Canaan is something God did. The Canaanites are vomited out of the land already.

These passages present an alternate view on how the Canaanites were ousted from the land (expulsion, either already or in the future) than what we find on Deuteronomy and Joshua (annihilation). The Bible carries with it multiple traditions of how the Israelites came into the land. (see also Numbers 33:50-56, which speaks only of “displacing” the Canaanites, not annihilating them).

Note, too, that the gradual displacement of the Canaanites in Exodus 23 coheres somewhat with the picture given in Judges as opposed to the rapid Blitzkrieg victory tour depicted in Joshua 7-12 (e.g., Joshua 11:23, “So Joshua took the whole land, according to all that the Lord had spoken to Moses; and Joshua gave it for an inheritance to Israel according to their tribal allotments. And the land had rest from war.”).

On the one hand, this is good news if you want to think of Israel’s settlement of Canaan in biblical terms that also takes the edge of the violence. On the other hand, this is bad news if you want to follow the Bible, since the Bible explains how the Canaanites ceased living in their land in two mutually exclusive ways–i.e., the Bible does not speak with “one voice,” which I know for some is more troubling than the thought of God killing off a population.

You can’t have everything.

If you want to read more about this, see Baruch J. Schwartz, “Reexamining the Fate of the ‘Canaanites’ in the Torah Traditions (pp. 151-70, Sefer Moshe: The Moshe Weinfeld Jubilee Volume : Studies in the Bible and the Ancient Near East, Qumran, and Post-Biblical Judaism 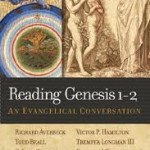 October 17, 2013
Two recent books on Adam, evolution, and Christianity that I don't think help at all
Next Post