Two recent books on Adam, evolution, and Christianity that I don’t think help at all

Two books on evolution and Christianity have been sitting on my desk for a few weeks now: Reading Genesis 1-2: An Evangelical Conversation

and Four Views on the Historical Adam. I haven’t been sure what to do with them.

The second book also features essays by Collins and Walton along with Denis Lamoureux (St. Joseph’s College, University of Alberta) and William Barrick (The Master’s Seminary).

I am always on the lookout for helpful voices in the Christianity/evolution discussion, whether or not I agree with the specifics, and I was hopeful that these two would add to that conversation. But, in my opinion, neither book helps the conversation along.

As I see it, they more perpetuate the problem within evangelicalism–another collection of essays of authors who are on such different pages in terms of basic views of the Bible, how it should be read, and with a sub-current of theological protectionism, that any discussion of second order theological issues (like the historical Adam) never really gets off the ground.

To put it another way, when “voices” approach that conversation with the clear intention of defending biblical literalism and/or a historical first man, those voices have in effect removed themselves from the conversation. When biblical criticism, historical context (whether of Genesis or Paul), and evolutionary science are either held at arm’s length or manipulated to reach desired goals, what we have is not a “conversation” over a pressing issue, but an apologetic driven by dogmatic commitments. The result is simply the repetition of slogans intended not to further conversation but defend “truth.”

I feel we’ve seen enough of this sort of thing.

I get quite frustrated when, for example, John Walton is trying to lay out Genesis in its ancient context, and is told in response that he is spending far too much time in the ancient world, since the Bible, after all, is the authoritative word of God, and Moses, therefore, would have written a text that would be unique in the ancient world (Reading Genesis, see pp. 50-52, Beall’s essay questioning whether Genesis 1 represents an ANE worldview).

Untangling this sort of rhetoric is a discussion over theological starting points. The real issue behind this posture is a basic disagreement about what the Bible even is and what goes into reading it well. That is the true cause for the divide, and unless these sorts of issues are brought to the table, rather than left unstated in the background, no true conversation takes place. We are just spinning our wheels.

Or there is this rather exhausting, passive-aggressive, preamble to Barrick’s response to Lamoureux’s essay in Four Views (p. 80)

Denis Lamoureux tosses aside the traditional view that I and other adherents to a historical Adam hold dear. Let us be perfectly clear, however. One could argue that the historicity of Adam might not indicate anything about a person’s salvation. Perhaps a born-again believer could deny Adam’s historical existence without losing his or her saving relationship to Christ and everlasting forgiveness of sins. However, although it is not a salvation issue, the matter is still a gospel issue, because it touches on matters related to our need for salvation (universal sin) and the ability of Jesus Christ to act as a representative and Savior for mankind (as the “second Adam”) and as a restorer of the fallen creation. Diminishing the identification of the first Adam can have a detrimental effect on one’s view of the second Adam. Questioning the accuracy of one part of Scripture always puts the whole of Scripture into doubt.

Then Barrick counsels that “Biblical evidence should receive the bulk of our attention in this discussion of the historical Adam”–i.e., let the prooftexting begin.

I don’t know where to begin, other than to say that Barrick’s view seems utterly unaware of that fact that conversations over 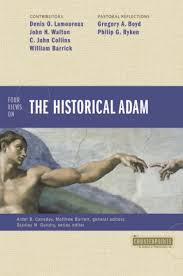 these and others points have been happening for a very long time. To ignore them and make these sorts of naive declarations is irresponsible. What Barrick asserts could really be the substance of a “Four Views” book in its own right. Is The Gospel at Stake and Should Someone’s Relationship to Christ be Openly Questioned because They Do Not Think Adam was the First Person? I’d buy a book like that.

Also pervading a number of the essays is a clear dis-ease with Genesis getting too close to ancient myth. Collins, as I’ve mentioned elsewhere, seems to think that Mesoptamian myth actually supports a historical reading of Genesis 1-11 (but, he tells us, “without undue literalism”–Reading Genesis, 77). I remain utterly unconvinced, if not baffled, but such an approach.

Collins notes that Mesopotamian sources (such as the Atrahasis epic and others) give us “prehistory” and “protohistory,” commonly used terms and with which I am in agreement, that establish a worldview for these cultures. Fine. But then Collins makes a puzzling, but familiar for him, move:

…it appears that the Mesopotamians aimed to accomplish their purpose buy founding their stories on what they thought were actual events, albeit told with a great deal of imagery and symbolism. Thus, it is reasonable to take Gen 1-11 as having a similar purpose in Israel, expecting similar attention to history without undue literalism (Reading Genesis, 77)

Collins gives the appearance of engaging Mesopotamian texts, but he is in fact neutering their well-known impact on our reading of Genesis. Yes, Mesopotamians THOUGHT they were writing about events (perhaps, but I’ll leave it for the sake of discussion). But just because they THOUGHT they were historical events doesn’t mean they WERE historical events. They could be WRONG. Am I missing something here? Ancients also thought gods impregnated women on a flat earth. Were they wrong? Yes.

I would submit that no one reading the Atrahasis epic today would come away thinking that just read a depiction, even a highly symbolic one, of what happened (regardless of what ancient people thought about the historicity of what they were writing). They would call it myth.

More importantly to extend consistently Collin’s logic to Genesis, all we are warranted in saying is that, just like the older Mesopotamian sources, the biblical author (whom Collins insists was Moses) THOUGHT he was writing about events. But that doesn’t mean they happened, only that the author believed they did.

Note, however, Collins’s subtle shift to speak of the biblical author’s “similar attention to history.” Collins should have said “similar attention to what the biblical author thought was history,” but as it stands, Collins leaves the impression–clearly intentional–that the Mesopotamian sources support the necessity of reading Genesis 1-11 historically.

They don’t. Not remotely. What we find here is not a solution but an example of the problem that plagues evangelical approaches to the Bible, the ANE, and evolution: theological needs (inerrancy, historicity, a real Adam) drive a reading of Genesis (and Paul). The result is not a better understanding of Genesis, but an example of how Genesis can be used in service of a theological apologetic.

I could pull other quotes from other authors, but (despite appearances) I don’t want to belabor the point. To go essay by essay and examine premises and unexamined assertions would be tedious and voluminous for all concerned. Not surprisingly, I assume, I find the essays by Longman, Walton, and Lamoureux to be well worth reading. This is not to say that I agree at all points. For example, I am not convinced by Walton’s material/functional distinction in Genesis 1, even if I am sympathetic to what I think his motivation is (to ease a conservative readership away from “creation out of nothing” in Genesis). Neither will it help to read Genesis in its cultural context but then not extend the same courtesy to Paul when he talks about Genesis (I think Lamoureux does the best job on this).

All things being said, these books brought me more frustration than illumination. Until the discussion turns to theological prolegomena about theology, the nature of Scripture, and even what kind of God we worship, the conversation over Adam and evolution will never get off the ground in an evangelical context.

October 17, 2013
The "evolution of the mind" and Christian cognitive dissonance
Next Post