when God is unfaithful

Last week I attended a lecture on Psalms by Walter Brueggemann at Wayne Presbyterian Church here in suburban Philadalphia. Part of his talk dealt with what he called “God’s infidelity”–those times when God does not come through, or seem to come through, on what he promised, or otherwise acts in ways that are inconsistent with what we believe God should act like.

–which is a nice way of saying “give God an earful.” About half the psalms have some sort of lament, and some more than others.

Like Psalm 44. Israel is in some national crisis. The people expected God to show up and help, but he didn’t.

The psalmist mentions how they have always put their trust in God, but now God has,

Thanks a lot. All this has happened, even though “we have not forgotten you, or been false to your covenant.” So, God, here’s an idea: “Rouse yourself! Why do you sleep, O Lord. Awake, do not cast us off forever.”

Translation: “God,  you’re asleep at the switch, it’s your fault, don’t even try to blame this on us.”

Then there’s Psalm 89, which goes for the jugular. After reminding God of his promise to stick by his promise to David to maintain an unbroken legacy of kings in Israel, and that God would never violate that promise, for God does not lie, the psalmist accuses God of doing just that. The Israelites are now in exile in Babylon: no king, no throne, no land.

The psalmist doesn’t ask or wonder out loud. He simply points out the obvious: “You have renounced your covenant…defiled his [David’s] crown…. Lord, where is your steadfasat love of old, which by your faithfulness you swore to David?”

Is God actually at the end of the day unfaithful? No, I don’t believe so.

Did the Israelites sometimes feel that God was unfaithful to them and accuse God of such? You betcha. They took their grief and anger and stuck it in God’s face.

Dod God strike them down with plagues, famine, or thunderbolts for daring to oppose his sovereign might? No.

And that’s in the Bible.

Maybe we have lost the “art of lament,” where complaining to God is part of the deal. Maybe, rather than playing church and make-believe, a vital dimension of the spiritual journey is giving God an earful now and then. Maybe God can handle it. Maybe God likes it, because it means we are being real and not fake.

Maybe if you’re angry with God now and then, you’re normal. Maybe that’s part of being the people of God.

Evangelical
is there payoff for the church in reading...
Peter Enns 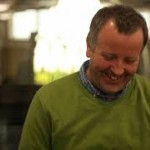