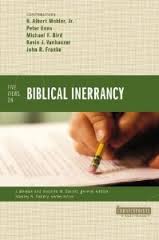 I just got back from the session at the Evangelical Theological Society meeting in Baltimore on the the book I recently contributed to, Five Views on Biblical Inerrancy. On the panel were co-authors Al Mohler, Michael Bird, John Franke, Kevin Vanhoozer (via video), and me.  The discussion was moderated by the editors of the book, James Merrick and Stephen Garrett.

As I entered the room I noticed two things. First, I had never met Al Mohler, but I was immediately taken by the fact that he and I are about the same height, so, if it came to it, I think I could take him.

Second, I didn’t notice a metal detector, though I had requested–in writing–that one be installed. Neither was my flak jacket neatly folded on my seat as a backup precaution. It turned out I didn’t need them any way.

The nuclear, apocalyptic, smack down, world-ending moment many were expecting and/or hoping for (let’s face it, why else would 2000+ people sit through 3 hours of this) didn’t happen. If anything was apocalyptic it was the $10 “sandwiches” the hotel provided for lunch and charging me $11.99 for 24-hours of internet access. What is this, Siberia?

Here’s how the session was laid out. We each began with a 15 minute presentation of our views. Next, for about 45 minutes we had the chance to press each other on matters, and I’d say there was a very healthy give and take among all present. If Vanhoozer had been there, this would have further expanded the conversation, but it was already hard enough sharing 2 microphones among the 4 of us. The Q&A session that followed, for about 45 minutes, was likewise fruitful.

My general take on the session is that all panelists were very clear in expressing what they thought. Some exchanges were pointed but not remotely aggressive or disrespectful.

My main regret is that it was only as the session was ending that I felt we were all getting to know each other well enough, so to speak, that things really could have taken off. I think each of us saw patterns of responses in each other that were only identified as the patterns kept recurring over the 3 hours.

We got below the surface of the rhetoric, but it would take more effort to get at the heart of things–which for me comes down to “what kind of God are we talking about here?” What we really needed now was for the panelists to find a pub, sit across from each other, and get down to business. “Panel discussions” are too much about posturing.

As a biblical scholar who deals with the messy parts of the Bible (i.e., the Old Testament), I came away with one recurring impression, a confirmation of my experience in these matters: mainstream American evangelicalism, as codified in the Chicago Statement on Biblical Inerrancy, doesn’t really know what to do with the Bible as a historical text.

Historical context is more a problem to be solved than a dimension of the Bible to be embraced–unless historical matters are idiosyncratically circumscribed, as they are in CSBI.

What summed up the issue, and the divide, for me at least was when one presenter pressed me by saying, “But the Bible is not merely human.” Indeed, but, it is still throughly human—right? A CSBI model of inerrancy gives lip service to the Bible’s historical particularity, but in practice keeps at a safe distance. In a way, this is a way to frame the entire discussion: what does it mean for a thoroughly human book to be more than human?

Welcome to the mystery of the incarnation.

That was a main theme of my 15 minute presentation. The title of my essay in the book is “Inerrancy, However Defined, Does Not Describe What the Bible Does.” Here are some of the main points I made.

On the last point, during the Q&A, I commented that my view of Scripture is that it carries a “narratival authority.” God uses the biblical story to form followers of Christ, not simply or even primarily rationally, but in their “whole being.” The biblical story has movement, shifts, changes–as does any story–and is used by God to shape us slowly and deeply in a life-long process of being conformed more and more to the crucified and risen Christ, not simply giving us discreet self-contained “truth claims.” The Bible itself bears witness to this journey of God’s people as they grow and reflect on God in various settings and situations, which is why there is such theological diversity in Scripture, and systematizing Scripture under a CSBI model is out of place.

OK, that’s it for now. I may expand on some of this soon, especially since the book is now available.

November 17, 2013
Genesis, creation, and two very different portraits of God (or, you can't pin God down)
Next Post