In today’s post, Carlos Bovell suggests a visual metaphor that moves beyond the slippery slope, either/or thinking common among inerrantists.

Bovell, a frequent contributor to this blog, is a graduate of Westminster Theological Seminary and The Institute for Christian Studies, Toronto. He is the author of Inerrancy and the Spiritual Formation of Younger Evangelicals (2007), By Good and Necessary Consequence: A Preliminary Genealogy of Biblical Foundationalism (2009), an edited volume, Interdisciplinary Perspectives on the Authority of Scripture (2011), and Rehabilitating Inerrancy in a Culture of Fear (2012).

It’s very hard for inerrantists to change their thinking about how their doctrine of scripture is related to the spiritual life.

The problem is that they don’t have an alternate model and so instead of jeopardizing their connection to God (which they see as being established via scripture), they cling to inerrancy and hold out for any argument that gives an inerrant Bible even the slightest possibility of being true.

I trace this to a rhetorically powerful visual metaphor that they use to help conceive of what happens to believers when they begin challenging inerrancy: the slippery slope.

The slippery slope metaphor is what makes some inerrantists think that inerrancy is crucial, even non-negotiable, to faith. In fact, conceiving of scripture as being a central indication of one’s faithfulness to God has such a powerful ideational hold on conservative evangelicalism that even students who genuinely want to do serious research will select courses of study that will make it easier to keep inerrancy intact. They do this as a precaution because by doing so, they believe they’ll keep their faith intact.

What is needed, I would say, is a new visual metaphor for how scripture relates to faithfulness without tying inerrancy to faithfulness as the default starting point. We need a picture that allows inerrancy not only to be directly challenged but also discarded without having people feel like they might end up giving up faith.

As a suggestion toward remedying this, I offer the following illustration (adapted from a popular book on mathematics entitled, How Not to Be Wrong: The Power of Mathematical Thinking 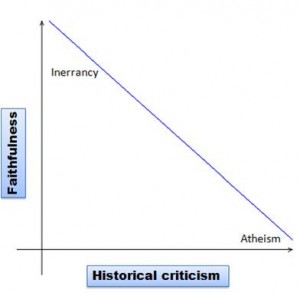 The slippery slope picture holds that once you start being critical of inerrancy there is no non-arbitrary way to stop the inexorable slide toward atheism. Put another way, the more historical-critical studies are allowed to inform our reading and understanding of the Bible, the more we’re reading the Bible like atheists. This is why some well-meaning authors feel obliged to characterize otherwise “solid” inerrantist biblical scholars as outright and duplicitous liberals.

But at the same time there are non-inerrantist, evangelical writers who would describe these same, “solid” inerrantist biblical scholars as thinly disguised fundamentalists. In other words, they have not come nearly far enough to meaningfully distinguish them from the more strict inerrantists. How can both dynamics be at work at the same time when people write about the doctrine of scripture?

The fact that both descriptions are being presented at the same time suggests that the slippery slope model is not doing justice to the state of affairs within evangelicalism today. What is needed is a new picture. 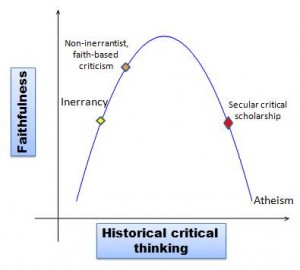 Notice how this graph does not encourage believers to correlate faithfulness with being wary of historical criticism. Instead, it points believers toward a faithful appropriation of it.

Of course, this leaves open such questions as “How much historical criticism is too much (or not enough?)” or “At what point on the curve is inerrancy no longer a viable category or is historical criticism actually not being practiced but only paid lip-service?” These are legitimate questions, but answering them wasn’t the purpose behind wanting to come up with a new picture.

The purpose behind suggesting the new picture is to help inerrantists get out of the slippery slope way of looking at things so that we can all begin thinking more intently about the legitimate place of historical criticism and still honestly believe (and treat each other like we believe) that the other Christians we are talking to, the ones who we so adamantly disagree with, are also trying to maximize faithfulness just as much as we are. 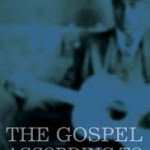 December 5, 2014
the gospel, the blues, and a world gone wrong
Next Post

Can God Change the Past?
Roger E. Olson
Related posts from Peter Enns

Evangelical
does an inerrantist culture "do good or do...
Peter Enns
TRENDING AT PATHEOS Evangelical