As others have pointed out, Eichenwald’s rhetoric is inflammatory, and his grasp of the issues is second-hand–at points rather naive, at least from the point of view of those who have been around the block a few times on the issues he raises, and especially those who work with the Bible for a living.

Even though Eichenwald would probably benefit by availing himself of some conversation partners in Bible, theology, and church history, his main point holds, if only in principle:

Why is Eichenwald so animated?

When the illiteracy of self-proclaimed Biblical literalists leads parents to banish children from their homes, when it sets neighbor against neighbor, when it engenders hate and condemnation, when it impedes science and undermines intellectual advancement, the topic has become too important for Americans to ignore, whether they are deeply devout or tepidly faithful, believers or atheists.

You or I may be able to go through each of Eichenwald’s list of Bible problems or early church embarrassments and offer a reasonable counterpoint, correct an overstatement, or provide some needed nuance–and every other paragraph I wished I could sit down with him and say, “Dude, seriously, we know all this; here is where the conversation is. You’re welcome to join whenever you’re ready.”

But reading the article from that point of view misses what Eichenwald is trying to do.

Despite appearances, Eichenwald isn’t attacking the Bible. He is attacking Sarah Palin, Rick Perry, Michelle Bachman, Pat Robertson, and Bob Jindal. Eichenwald makes that perfectly clear in the opening paragraph, and in the last several pages where he has these politicians directly in his sights.

The Bible of these fundamentalists is really a Bible of their own creation, one that is already freighted with theo-poliitcal baggage. That is what Eichenwald intends to expose.

Most of the article looks like an attack on the Bible, but in fact it is only a rehearsal of what can be found in decent introductory books on the Bible.

Yes, Eichenwald overstates here and there; yes, he seems at times to be largely unaware that there is a world of scholarship out there that knows these same problems he points out, doesn’t avoid the issues, but looks at them from a larger perceptive.

It is completely obvious to me, however, that Eichenwald has a strategy in his article, one that reminds me of Spinoza’s 1670 Theological-Political Treatise

There, anticipating some elements of modern biblical criticism, Spinoza famously undermines traditional views of the Bible for the purpose of undermining ecclesiastical authority over the state.

By deconstructing the Bible, Spinoza pulled the rug out from under the the tyranny of mixing politics and religion (to use the modern idiom).

Eichenwald’s article is no Theological-Political Treatise, but the vibe is similar.

He spends most of the article alerting the politicians of our day that the Bible is not what they claim it to be–and they are inconsistent and naive in how they handle it. They are, as Eichenwald says, “Biblically illiterate” both in terms of what the Bible actually says and what modern scholarship has shown to be case.

This is why Eichenwald covers several well-known topics–they may be well-known to most, but apparently biblicistic-literalist politicians need a course in BIB 101. He wants to undermine politics, not religion.

It may not be a surprise for most to see that the Bible we have is a product of transmission over a long period time that led to additions, like the “woman caught in adultery” in beginning at John 7:53. The Bible as a whole–both testaments–developed, changed, morphed, evolved over time; that’s how the Bible came to be from the very beginning.

You and I may know that, but if you’re trying to pull the rug out from under a Rick Perry prayer rally to 30,000 people, it’s something worth bringing up.

It may not shock most seasoned Bible students to hear that translations never get the originals right, that translation is a form of interpretation–even to the point of deliberately sanitizing troubling parts or creatively “clarifying” ambiguities by adding words that aren’t there. Welcome to the world of translating ancient languages into modern idioms.

You and I may know that, but a modern-day Spinoza wanting to squash Michele Bachmann’s biblical support for her views on same-sex marriage will want to bring this front and center. And he may also–and Eichenwald does–point out how inconsistent these fundamentalist politicians are in appealing the Bible as a moral standard.

It may not trouble everyone to hear of the political shenanigans, and violence, of the early church in their disputes over matters of theology, but if you’re dealing with a Sarah Palin or Pat Robertson who think the Bible was handed down from on high more or less as is, you’re going to highlight this with rhetorical overstatement and flare.

Theological contradictions and diverse theologies on the part of biblical authors may not cause you to lose sleep, but pointing them out sure comes in handy when politicians claim to be following the “clear” teachings of the Bible.

There is a lot in the article I could pick on, like mistakes Eichenwald makes (e.g., 1 Timothy does not prohibit women from 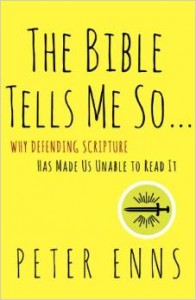 positions in secular leadership, adding things to sacred texts isn’t a shocker but as old as the Bible itself).

But I don’t disagree with what Eichenwald is trying to do in principle, as he summarizes at the end of the article.

If Christians truly want to treat the New Testament as the foundation of the religion, they have to know it. Too many of them seem to read John Grisham novels with greater care than they apply to the book they consider to be the most important document in the world.

But the history, complexities and actual words of the Bible can’t be ignored just to line it up with what people want to believe, based simply on what friends and family and ministers tell them.

The Bible is a very human book. It was written, assembled, copied and translated by people. That explains the flaws, the contradictions, and the theological disagreements in its pages. Once that is understood, it is possible to find out which parts of the Bible were not in the earliest Greek manuscripts, which are the bad translations, and what one book says in comparison to another, and then try to discern the message for yourself.

I might say it differently–and in fact I did

, and do several times a week on this blog. But the very fact that Newsweek can pick up a story like this about the Bible tells us more about the frustratingly inept manner in which some public Christians sell the Bible–and the Christian faith–short.

Christians should be at the forefront of correcting the kind of Biblical illiteracy Eichenwald exposes. If we did, we wouldn’t need Newsweek to do it for us.