The Need for a More Christlike God: An Interview with Brad Jersak 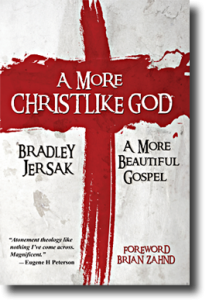 Today’s post is an interview with Brad Jersak, author of A More Christlike God

, which came out last week.

The book, with a foreword by Brian Zahnd, is about how replacing whatever image of God we have with a more Christlike image of God is central to the Gospel being truly good news. ​Brad Jersak (PhD) serves on faculty at Westminster Theological Centre (UK), where he teaches New Testament and Patristics. He is also senior editor of CWR Magazine. ​

Tell us a little bit about yourself and your spiritual journey

I grew up in the Canadian Evangelical scene and sensed a lifelong call to ministry from a very early age. In the course of pursuing theological training, I met and married Eden. After seminary, I eventually pastored in two congregations (one Mennonite, one Renewal focused) for twenty years (1988-2008).

In 2003, I began writing books (10 now) and doing seminars, especially on the topic of ‘listening prayer.’ In 2008, I left pastoring and completed a PhD in theology (Bangor, Wales). I am now on faculty at Westminster Theological Centre (UK) teaching New Testament and Patristics and am senior editor of CWR Magazine (Pasadena). Over the last 12 years, my journey progressively led me toward and finally into the Eastern Orthodox Church, where I was ordained ‘Reader’ in 2013.

So, in a sentence or two, can you tell us what your book is about?

In the church and the world, toxic images of God abound—retributive notions of God that look nothing like what Jesus revealed in his life or teachings. A More Christlike God portrays God as exactly like Christ crucified: self-giving, radically forgiving, compassionate love.

Why did you write this book? What’s your big vision?

I want to share the good news that if God is perfect love revealed perfectly through Christ, then the gospel is more beautiful than we ever imagined. People who find that God is actually Christlike might be freed to love him again.

So many people, from Christian to Muslim to Atheist, believe in soul-damaging images of God. They either live in fear and bondage within that abusive belief system; act as its agents who perpetuate the abuse, or reject faith altogether because of their distorted conceptions of God no longer work. This book is especially for Christians who are ready to consider the Christlike God, especially post-Evangelicals who already instinctively know something is “off” and want confirmation that their faith has not been in vain.

Can you give us an overview the book? What should we expect to find?

Part I is called What is God like? Competing images of Will and Love. When we ask, ‘What is God like?’ we soon discover many toxic and un-Christlike images of God, even among Christians. These images range from the almighty God of raw will to the good God who reigns by love and consent. The New Testament claim is that the perfect image of the invisible God is revealed in the Incarnation of Jesus Christ.

Part II is The Cruciform God where I state that the God revealed through Christ is seen most clearly at the Cross. A ‘cruciform’ God, by nature, consents to the afflictions caused through natural law and human freedom. But he also participates in and transforms our suffering world as self-giving, radically forgiving, co-suffering love.

Finally, Part III is Unwrathing God. Since Christ reveals God as cruciform, the biblical notion of ‘wrath’ shifts from any active violence in God to a metaphor for God ‘giving us over’ (consenting to) the intrinsic, tragic consequences of our own defiance. It establishes the Cross, not as a place where God demands wrath as appeasement, but renounces wrath in favor of forgiveness. This plays out in a more beautiful gospel, where God never turns from or against sinners, but is relentless in his mercy, demonstrated on the Cross.

Can you give us 3 compelling quotes that really capture what the book is about?

“We believe Jesus has shown us the face and heart of God through the fullness of his life on earth: revealed through eyewitness accounts of his birth, ministry, death and resurrection. We regard this life as the decisive revelation and act of God in time and space. That’s still a faith statement, but for Christians, it is our starting point. To look at Jesus—especially on the Cross, says 1 John—is to behold the clearest depiction of the God who is love (1 John 4:8). I’ve come to believe that Jesus alone is perfect theology” (9).

“When I personally turned my gaze to the God who is completely Christlike, I was confronted with how un-Christlike the ‘church- God’ or even the ‘Bible-God’ can be. Setting Jesus as the standard for perfect theology, many of our current Christian beliefs and practices would obviously face indictment. Even significant swaths of biblical literature don’t line up well with the Christ of the Gospels. Claiming that God is revealed perfectly in Jesus triggers tough questions about the God I once conceived and preached” (13).

“For our own sakes, we might take a break from trying to convince ourselves that Jesus was and is God and to spend this twenty-first century meditating on the truth that God is like Jesus. Exactly like Jesus. When the veil that obscured God was torn in two, what did it reveal? A Suffering Servant who hangs on the Cross (Zech. 12:10)! Thus, every human conception we previously associated with ‘God’ is uprooted, root and branch!” (22)

If you had to name them, what 1-2 parts of the book are you particularly excited about?

I am enthusiastic about introducing and explaining the language of ‘cruciform’ (cross-shaped) and ‘kenotic’ (self-giving) so that any thoughtful person can ‘get it’ quite easily.

I also work hard to explain ‘wrath’ in biblical context as a metaphor for the intrinsic consequences of sin rather than active violent intervention. Clarifying the language we use for God is important because the words themselves become images that either reveal or distort our perception of who he is.

I am even more excited about chapter 14, our description of ‘The Beautiful Gospel,’ which is an adaptation of a presentation called ‘The Gospel in Chairs’ (originally composed by Fr. Anthony Karbo). It demonstrates how God does not turn from anyone until they turn to him, but rather, is always for us and always toward us, as seen over and over through the life of Christ … supremely on the Cross. A growing network of friends has been trying to popularize the presentation in many settings (including prisons, S. African townships, university classrooms) with incredible responses. As people’s image of God becomes Christlike, the gospel once again is heard as good news.

April 23, 2015
discovering the futility of human existence at my high school reunion
Next Post

May 4, 2015 Who's up for a little New Testament quiz? (sure you are. do it.)
Recent Comments
186 Comments | Leave a Comment
Browse Our Archives
Related posts from Peter Enns