Protestants Can Use Prayer Beads Too 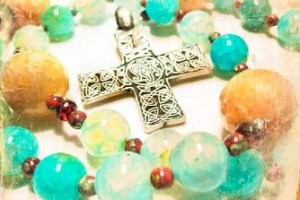 There are many ways to pray. I practice and teach centering prayer, a Christian form of meditation that uses no words or objects. (Well, just the occasional word, but that needs a longer explanation you’ll find here.) I also sometimes chant Psalms as part of the Hours. I recite fixed prayers like the Lord’s Prayer; I offer prayers for friends at church each week; I use special forms for specific purposes, such as the Serenity Prayer and the Welcoming Prayer; sometimes I read scripture contemplatively using lectio divina; and, much more uncomfortably, I participate in praying out loud for each other in a small group. Many traditions have some form of prayer that uses beads or something similar you work with your fingers to guide you through a repetitive mantra-like form of prayer. I first experienced this as a Catholic, with the rosary. Hindus and Buddhists have similar beads — by some accounts, the idea of prayer beads was brought back to the West by Crusaders.

But it was just over a month ago, with two decades of contemplative Christian practice under my belt, that I discovered for the first time there was such a thing as a Protestant rosary. I learned this when my church, St. Lydia’s, had a workshop on making and using “Protestant rosaries” at our annual retreat. I wasn’t able to attend the workshop because I was leading one on Christian meditation at the same time, but my curiosity was piqued. Days later, a review copy of the new book A Bead and a Prayer: A Beginner’s Guide to Protestant Prayer Beads

, by Kristen E. Vincent, landed on my desk.

Freed from the Catholic premise of praying to the Virgin Mary, and from all fixed aspects of the structure of prayer as laid down by the Magisterium, Vincent takes the basic form of the rosary’s beads and uses it for a variety of practices. Oh, I just want to get this out of the way up front: I always thought the term rosary referred in some way to the Virgin Mary, as the Hail Mary was the prayer used, but as best I can tell from the etymology, the term is simply an affectation of the Middle Ages, meaning rose garden or garland of roses. It referred originally to the prayer cycle itself, then also to the prayer beads used with it. But Vincent consistently uses the term Protestant prayer beads, avoiding the term that is so much associated with Catholicism. 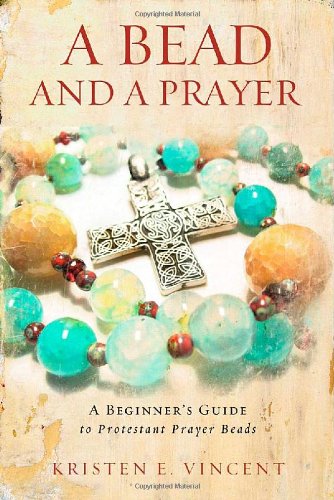 (Also, Protestant prayer beads typically have four cycles of 7, which with extra beads totals 33 or 34; Catholic rosaries have 5 cycles of 10 which with extras totals 59 or 60. For nearly a millennium the Catholic practice was to do the entire thing 3 times for 150+ prayers, but John Paul II added an extra full set of 5 decades, brining the total to 200+. Insert joke about Catholics being more hardcore.)

I will confess that when I was a practicing Catholic I did not follow the rules myself. Coming with my contemplative perspective, I preferred using the rosary purely as a mantra meditation tool, more in the style of the Eastern Orthodox. I would repeat the “Hail Mary” prayer over and over, without doing the parts where you’re supposed to “meditate” on aspects of Jesus’ life, or, sometimes, use the simpler Jesus Prayer popular in Eastern Orthodox contemplative practice: “Lord Jesus Christ, have mercy on me,” or even more simply, “Lord have mercy on me.” This mantra style is one option Vincent offers.

She also uses the beads in an entirely different way: as prompts for prayers, suggesting you do one cycle of 7 prayers praising God, then one of 7 confessions, then 7 intercessory prayers, and finally 7 prayers of gratitude. I bristle at how this repurposing of the cycles discards the contemplative element completely. But why not?! The point is that the beads are used for a sacred act but they are simply a tool (but what about this set I have that was blessed by the pope?), and the ways you can use them are limitless. I had to let go of my leftover Catholic rigidity.

Another method Vincent offers is not unlike lectio divina, using the repetitive bead prayers to dwell on one scripture passage, or on a theological concept like the Trinity or the Passion of Christ. She also suggests using them without even a mantra, simply taking a breath with each bead, in something more like true meditation. And finally, she suggests coming up with your own approaches. (She even changed the number of beads from the Protestant standard for her own reasons.) As Vincent emphasizes again and again, which I never heard in the Catholic world, you can use bead counting as an aid for any kind of prayer. It can prompt you to focus on a sequence of things, or on the same thing deeply and repeatedly, or on nothing at all. You can use it to go deeper into thought, or into the unspoken Word.

As much as the traditional Catholic rosary has a single proscribed method for use — so much so that it was a landmark event when Pope John Paul II changed it for the first time in 500 years — “Protestant” prayer beads are an empty form on which the practitioner can overlay any template of prayer.

A Bead and a Prayer

is a short (109 page) introduction to how to use this valuable tool. The first two-thirds is devoted to four weeks of trying out methods of using the beads, which can be done individually or, better, as a group. The last part has a leader’s guide and instructions for making your own prayer beads. (Though you can certainly buy them as well.)

Perhaps the main value of prayer beads is this: they are an object which has a physical presence that can remind us of prayer, of God even. As Vincent puts it:

“In the middle of a busy day or at bedtime, they will look down, see their prayer beads, and be reminded to pray. They will bring to mind God’s presence, which calls them into an encounter. Such a visual cue has distinct importance for someone in the midst of crisis or doubt.”

Like monastery church bells tolling the Hours, beads in your pocket or laying on your desk, or a single strand around your wrist, or the bead ring I have, can remind you each time you notice them that connection to God is as close as a quick turn of your attention.

A Bead and a Prayer: A Beginner’s Guide to Protestant Prayer Beads

is a selection of the Patheos Book Club.  For other posts about the book, more information, or to join the conversation, click here.

August 13, 2014
The Giver brings the timely dystopian novel fully and compellingly to life on screen
Next Post 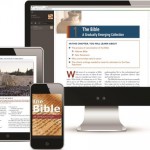 August 29, 2014 Great Bible Intro Is That Much Better as E-textbook
Recent Comments
1 Comment | Leave a Comment
Browse Our Archives
Related posts from On the Way