The Giver, which opens this Friday, August 15, explores a familiar dystopian trope which seems to be everywhere recently — Divergent, Hunger Games — that society attempts to solve the problem of human frailty, anger, violence, etc. by imposing uniformity/conformity. (Depending on the author’s vision and politics, that uniformity might look more like communist Russia, corporate consumerism or 1950 suburban America.) Then along comes a free spirit who can’t fit in, and simply by not being able to conform they become an enemy of the state. This leads them to rebel or break free. While this theme carries a judgement about current society, its popularity is obviously due to its suggestion that the free spirits among us carry an important message: that a society must absorb and embrace diversity and emotional messiness and ambiguity or it will become so rigid that it will break.

Several things recommend the new movie adaption of The Giver over much of the recent pack of young adult dystopian books-turned-blockbusters. First, Lois Lowry’s 1993 novel on which it’s based is outstanding; it was awarded the Newbery Medal and has sold over 10 million copies. The book is assigned reading in many middle school classrooms (to be read by students the age of the young characters in the novel, 12 to 13, though in the movie they are 17 to 18.) I usually avoid seeing a movie before reading the book on which it’s based, but in this case I decided to use that fact to experience the movie on its own merits. I brought along an expert, my 11-year-old friend Peter (a far harsher critic than am I), to add the perspective of someone who had read the book and fit the movie’s target audience. We both enjoyed the movie on every level — its message, acting, cinematography, action. In Peter’s view, the differences from the novel are reasonable, and the film version expands on and perhaps exceeds the original in places.

Speaking of the action, the movie’s director Phillip Noyce (Patriot Games, Salt) is in the top class of Hollywood action movie makers. He works with an excellent script and fascinating cinematography (among other things, the movie transitions gradually from black & white to color) to create a compelling, steadily engaging film. The Giver is easily one of the best of this decade’s young adult movies.

The creative force behind getting the movie made, and one of its producers and stars, Jeff Bridges, picked up the option to turn The Giver into a movie 18 years ago — just a few years after the book was written — and has been trying to get it made ever since. At the time, Hollywood didn’t see the potential in a dystopian young adult novel with a controversial political message. Bridges cared deeply about staying true to the book and helped assure the result would be worthy. (As true as possible; the book is mostly inner dialogue, so many changes had to be made beyond even the usual need to shorten and explain when taking a book to the screen.) And the fact that Jeff Bridges and Phillip Noyce were attached to the film made it possible to fill out the cast with talent remarkable for a young adult movie; notably Meryl Streep, who plays another Iron Lady, as the community’s Chief Elder, with her typical brilliance. The movie is also a perfect acting debut for Taylor Swift, in a small role which she handles impeccably. All the younger cast members do solid jobs, with leads Brenton Thwaites and Odeya Rush delivering excellent performances. (It’s worth noting here that the movie presents a distinct acting challenge for Katie Holmes, Streep, Thwaites and Rush, as they play characters who for some or all of the film have their emotions chemically suppressed.)

The obvious and most interesting question about The Giver is, of course: What it its moral or lesson? The script is peppered with lines that suggest this tension between a life that’s suppressed and one that’s fully expressed:

“I felt so alive. This is forbidden?”

But as my 11-year-old friend Peter explained to me when I casually compared The Giver to Divergent, there’s a significant difference: in Divergent, the natural emotions of people remain but are discouraged and suppressed by a totalitarian government (this is true of The Hunger Games too), whereas in The Giver people have been bred and medicated into submission. There is no desire to rebel that needs to be resisted by a violent government; rather, the tendency to rebel has itself been removed. More Brave New World than 1984.

As the narrating voice of the lead character, Jonas, says of the government practices aimed at suppressing emotions, including one of terminating babies that show a tendency to be overly emotional before they can grow up into troublemakers: “They hadn’t eliminated murder. They’d brought it home. They just called it by a different name.”

You can draw your own parallels to our world. Though I think no one, especially at this moment in history, would suggest that the violent acting out of human emotion has been contained. In fact, that is the poignant thing about this story being told today. We long for an answer to violence now more than usual. But we need to remember that the answer can’t be the suppression of freedom and individual expression. The answer can’t be forcing everyone into conformity. The answer can’t be telling those who are struggling to just behave themselves.

It was a rather weird overlay that the suicide of Robin Williams came on Monday, August 11, the night before the movie’s press conference with Jeff Bridges, who’d famously played alongside Williams in another spiritually-tinged film, The Fisher King. All over social media since Monday evening I’ve seen friends who, like Williams, struggle with depression asking others to stop saying Williams should have gotten help, or wasn’t getting the right help, or that the problem was addiction. Medications which cover up the symptoms of depression do not remove the depression. They may help in many cases; that’s a different debate. But telling someone who’s struggling with their feelings that the answer is to fit into the acceptable range of emotions by taking a pill is exactly what happens in The Giver. And perhaps the most subversive and important challenge of this book and movie is to look at the current practice of medicating difficult children and young adults into conformity.

In discussing the film, several cast members expressed their own takes on the story’s message. Meryl Streep said, “The point of the book is, you can’t keep things in. You can’t suppress the things that make us human. And it’s pointless to try.”

Taylor Swift, who said she’d been permanently changed by reading the book in 5th grade, saw a very personal message about the value of emotions:

“In a world where, right now, I’m seeing so many of my fans write to me on Instagram and Twitter and in letters, saying that they’re having such a tough time with life because they can’t imagine that we can experience such great pain, such intense loss, such insecurity, the thing that I wish that I could just tell them over and over again is that we live for these fleeting moments of happiness. Happiness is not a constant; it’s something that we only experience a glimpse of every once in a while, but it’s worth it.”

Some have said the story is an allegory for finding Christ; Lowry rejects this outright, noting that, as the book is about a 12-year-old boy taking on his adult responsibilities, it is a popular bar mitzvah gift.

But, so, what’s the message? The person who brought this story to the screen, Jeff Bridges, said this on Tuesday: “One of the things I like about this movie, and the book as well, is it’s not really shoving a message down anybody’s throat, but hopefully it’s provoking them to ask some questions:  What are we willing to do for our comfort and our safety? And what is the true cost of that as a human being?”

The crisis that gave rise to the society in the story also is never explained. This is one of the main reasons for the book’s broad success and it is retained perfectly in the movie: It asks questions. It doesn’t create too specific of a backstory, so we can fill in our own backstory; and it doesn’t offer easy answers because there are no easy answers. Yes, emotions can be horribly destructive. No, the answer isn’t to eliminate them. What The Giver does say, emphatically, is that emotions are part of our humanness, and that we cannot suppress the bad without also suppressing the good, and that the result of that suppression — living while asleep, being dead while alive — is no life at all. This is a core theme of most spiritual traditions, and the central message of nearly all contemplative and mystical paths, including my own: Wake up! Don’t settle for anything less than being fully alive. We are all saints if we live into the potential existence before us. The movie adaption of The Giver makes this case brilliantly and brings this important message to a wider audience at a critical time. 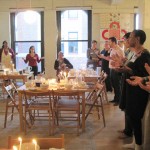 June 25, 2014
From Dinner Church to Neighborhood Hub, Building Community Through Working Side by Side
Next Post 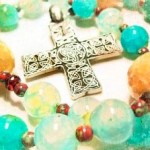