With The Zimzum of Love and his new Oprah Network TV show, Rob Bell broadens his focus but it’s all spiritual 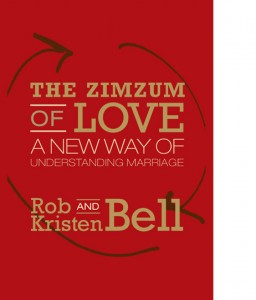 As Rob and Kristen Bell’s book, The Zimzum of Love: A New Way of Understanding Marriage

, blankets the country and Rob’s new TV show premieres on Oprah’s network tonight, it is clear his focus has shifted to speaking about spiritual principles rather than specifically Christian, or even religious, ones. His new book about marriage mentions Jesus and scripture only occasionally, which has caused some conservative Christians to freak out. But to affirm the spiritual dimension of life and speak in universal terms does not negate one’s Christianity. As I mentioned in a recent post: “The Jesus test comes up with my Christian meditation practice. Every once in a while, I’ll meet someone who says that if Jesus is not central in the practice then it is dangerous — open to the demonic or something. No. It’s just a spiritual practice that’s not all about Jesus.”

A more legitimate question, might be: Has Rob Bell become a self-help guru and abandoned his evangelical mission of preaching the gospel? I have been asking myself variations of this question for years, while writing in the space between spirituality and self-help. The answer is that there is no separation. Talking about how to live life fully and honestly and helpfully and robustly and ethically is talking about the gospel. And talking about faith without concern for how to live life is to some extent empty words.

As Danielle Shoyer said in a brilliant recent post about the conservative reaction to Bell’s latest moves:

I am truly baffled at how evangelicals, of all people, can’t see the positive possibilities that Rob Bell creates by engaging lots of people — lots of non-Christian, agnostic, atheistic, skeptical people — in discussions about God. Consider: The OWN channel is in 85 million homes worldwide. … What kind of confused evangelical would look at those numbers and say, “You know what would be terrible? If a Christian had his own talk show on that network. That would be really awful news”?

If Oprah calls you up and invites you to share your thoughts on your faith, what kind of a moron would you have to be to say no? Would evangelicals really rather someone NOT be talking about God?

And it would be one thing if Rob Bell was really distancing himself from faith and traditional values. But this new book is all about the sanctity of marriage. It says over and over that marriage is sacred because it reflects and channels God’s love in the world. It talks about the Trinity! Traditionalists should be celebrating this ode to the sanctity of marriage. (Of course, Bell includes gay marriage within this sacred circle, so there is that.)

We will see how Bell’s TV show progresses after the premiere, but it will introduce a lot of Oprah watchers who’ve discarded their childhood Christian faiths to a thoughtful, open-minded and exhilarating version of Christianity, one they didn’t know existed. How awesome is that?!

And this book about marriage: While saying it offers a “new way of understanding marriage” is a bit of marketing hyperbole, the way which it does offer is profound, and it’s a message that everyone should hear. Essentially, what the Bells put forward is that in marriage, while each partner remains a complete and unique individual, in creating space for each other they also become part of a new thing that is neither of them and also both. They compare this to the Trinity, and especially to the Hebrew mystical concept tzimtzum (or zimzum), which says that in order to make the material world, God had to allow space that was not God, into which the world could emerge. The Bells say that when future partners meet and enter into a healthy relationship, they allow this new space between them, which is neither of them; it is a dynamic alive space through which their love can pour out to each other and to the world around them.

This space is filled by each partner’s desire to help the other partner thrive. It is vital and powerful but also fragile. The flow of energy can be blocked when anything else gets in there and mucks it up. That can be toxic ideas and patterns:

And it can be other people:

It’s written in the book of Genesis that when you get married you leave — and then you cleave. … If you don’t leave and cleave well, it’s easy to end up with other people in the space between you.

It has been Rob Bell’s trademark to talk about complex theological concepts in clear, accessible ways. In Zimzum of Love

, the Bells apply that to the equally if not more complex subject of what makes healthy relationships work. At first I found the format of the book a bit silly; it drops in and out of dialog between Rob and Kristen recounting stories from their marriage and is peppered with stick figure drawings. But the stories and drawings illustrate deep mysterious truths.

The Bells insist you be honest with each other and don’t avoid the hard stuff:

R: It took me a while to realize that whenever Kristen articulated what wasn’t working for her, I immediately got defensive. As if anything she said about things not working for her was a statement about me not being, you know, The Man. Like I had failed her in some way. But I learned over time that she didn’t see it that way … Great marriages have an ease about them, a back-and-forth nonreactive, nondefensive, open, and ongoing flow in which you never stop talking and figuring it out together.

My favorite single concept from the book is this:

When you get married, you get another set of eyes. If you aren’t careful, this other set of eyes that sees the world differently can become a constant source of tension and conflict — with each of you endlessly trying to get the other to see everything like you do and win them over to your view.

You can let your different ways of seeing give you a broader, wider, fuller view of the world. Instead of seeing with two eyes, you’re now seeing with four.

How many years and how much emotional energy have I wasted being frustrated that my partner didn’t see things the way I did? This is such a beautiful way of reframing it.

Every couple, and anyone who wants to find a healthy relationship, will benefit from having these concepts and drawings bouncing around in their head as they take on the mysterious and beautiful challenge of walking life’s road with a partner. 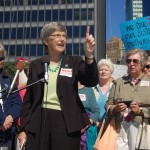 March 27, 2015 What If You Were at the Tomb?
Recent Comments
0 | Leave a Comment
Browse Our Archives
Related posts from On the Way