A presidency that began with such hope and optimism, and such astronomical approval and support, may well end in the utter collapse of the modern liberal program.

I’m sure that sounds like an overstatement, and perhaps it is.  2012 will be no cakewalk for Republicans, and they’re fully capable of bungling the opportunity history has given them.  But if Obama is defeated, then it will be one of the most stunning turnarounds in the history of modern politics.  Consider: George W. Bush entered his first term with a roughly 55% approval rating (averaging the various polls) and left it with about a 47.5% approval rating — a drop of 7.5% over the course of four years full of dissension, accusation and mockery.  Obama began his first term with 65% approval ratings and has stood below 45% for the majority of the past four months — a drop of 20%, nearly three times the Bush figure.

Yet Bush, whatever his virtues, was not an effective spokesperson for modern conservatism.  If a handsome, eloquent, highly intelligent and charismatic African-American Democrat with a charming family, who came to office with both houses of Congress and a historic groundswell of public support and abundant permission to blame his early struggles on the financial crisis and the Bush administration, cannot achieve more than this, then modern American liberalism will need resuscitation.  It should be sobering to progressives that the consummate representation of modern American liberalism is neither effective nor loved.  More Americans (7 out of 10) believe America is on the wrong track now than they did at the time of his inauguration. 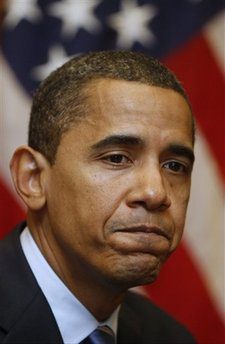 Throughout the eight years of the Bush administration, it was almost an article of faith on the Hard Left that anything the dreaded “King George” decreed was not only unwise and unnecessary, but immoral, irrational, and probably illegal, motivated not by cold facts and prudence but by cowboy-ish jingoism, the profits of the military-industrial complex and an enduring theocratic impulse.  With foreign policy, military actions, homeland security, and the economy, there was precious little need for careful examination of the rationale for Bush administration decisions.  If Bush did it, it was foolish and probably criminal, because Bush was not motivated by reason and love for country but by greed and war-lust and a crude evangelical superstitions.

So what do you do when your liberal savior extends and even expands the great majority of those policies?

Consider all the ways in which the Obama administration has continued the policies of the Bush administration, even policies that liberals, including Obama himself, excoriated when Bush was President.  Obama sought to repeat the success of the Iraq Surge with an Afghanistan Surge, and ramped up the kind of drone strikes (not only in Afghanistan and Pakistan, but even in places like Yemen) that liberals once lamented.  Where the Left once mocked Bush’s Freedom Agenda in the Middle East, the Arab Spring has indeed blossomed, and the Obama administration has been no less interventionist that their predecessors, though they’ve been able to stand behind national rebels in a manner similar to the initial Bush incursion into Afghanistan (with similarly ambiguous results so far).  And for all the talk of a “reset” in diplomatic relations, the early Obama overtures to our enemies produced no significant results — the kumbaya strategy got us nowhere — and the same tensions and disputes have reasserted themselves with Russia, China, North Korea, Syria and many other nations.  Thus writers at The Nation claim “the Bush-Obama presidency has sufficient self-coherence to be considered a historical entity with a life of its own.”

On homeland defense and civil freedoms, the Obama administration has defended warrantless wiretapping and continued extraordinary renditions.  In spite of the campaign promises, Guantanamo is still open.  The most severe of the Enhanced Interrogation techniques had already been discontinued, and as one CIA official says, “the incoming Obama administration changed virtually nothing with respect to existing CIA programs and operations.”  The same programs that the Obama campaign had once attacked where “all picked up, reviewed and endorsed by the Obama administration.”  The Obama administration not only endorsed the once-reviled Patriot Act, but they’ve extended the national surveillance apparatus and increased government power to detain American citizens indefinitely without trial.  So progressives complain that “Obama has maintained or expanded all civil rights violations Bush started.”

Even on the economy, Bush cut taxes in the midst of an economic slowdown, and Obama has essentially done the same — ont only extending the Bush tax cuts but adding other, non-income-tax cuts (payroll tax cuts, Making Work Pay tax cuts, etc.).  Obamacare will bring tax increases in 2018, but thus far Obama speaks of raising taxes on the rich while in fact he’s not yet done so.  All rhetoric aside, even Obama recognizes that raising taxes in the midst of a recession, at least in most tax brackets, is a bad idea.  And there are other examples.  Much though Obama likes to take credit for pulling the economy back from the precipice, the economy had already drawn back from the precipice by the time he came to office, and Obama not only continued many of the policies from the Bush economic team, he kept much of the team in place.  The corporate, capital gains and dividend rates have all remained the same.  And the same banks and trading houses that were discovered to be dangerously large in the 2008 financial meltdown are now larger than ever and turning massive profits again.

There are exceptions, of course, with Obamacare being the biggest.  Yet even Obamacare is not the single-payer, nationalized plan that liberals (including Obama himself) had publicly pined for — and Obamacare or large portions of it may very well be dismantled or ruled un-Constitutional.  Obama’s stimulus directed massive amounts of funds to the Democrat’s favored constituencies, but it proved so contentious and ineffective that the word “stimulus” is now radioactive.  Obama’s treatment of GM was shameful, the Democrat’s mis-regulation of the financial sector has slowed the recovery, and the Obama Justice Department has been negligent on matters of religious freedoms.  More exceptions come on issues like abortion, gay rights, unemployment benefits (it’s unlikely the Bush administration would have favored two years of unemployment payments), and of course Supreme Court appointments.  It does matter whether there is a Democrat or a Republican in the White House.  But there’s no question that the Obama administration has been far less different from the Bush administration than was promised during the campaign.

What’s so astonishing, though, is not that Obama has extended so many controversial Bush administration policies but the way in which his erstwhile supporters have responded.  They face (at least) two options:

Both options require the liberal to admit a mistake: either he was wrong about Obama, or he was wrong about Bush.  But the first option requires the liberal to sacrifice his love for Obama, while the second option requires him to sacrifice his hatred of Bush.  Either Obama was dishonest in the campaign or overwhelmed by baleful influences once he came to the Oval Office — or Obama, once he came to the White House and had the same information and responsibility that Bush had, came to more or less the same conclusions as Bush had.

Unsurprisingly, Option #1 comes out the huge winner here.  So powerful is the partisan mindset that I haven’t seen a single prominent liberal writer take Option #2.  They puzzle through the “mystery” of “George W. Obama” and conclude that the contradictions between Obama’s ideals and actions compose “a subtle disaster for all those whose hopes once rested with him.”  They would rather abandon their love of Obama than their hatred of Bush.  To put it more sharply: they are so deeply committed to the nefariousness and malfeasance of the Bush administration that they would rather believe Barack Obama a failure, a liar or a dupe than believe that George W. Bush took reasonable actions in light of the circumstances.

For instance, when the Bush administration signaled its intention to try Khalid Sheikh Mohammad (KSM) in a military tribunal instead of a criminal court, the liberal commentariat cried havoc and accused Bush of destroying the American Constitution.  Senator Obama voted against the Military Commissions Act of 2006 and frequently spoke against military commissions and in favor of federal courts of a military courts-martial.  Yet the Obama team quickly abandoned its flirtation with the criminal courts idea and eventually resumed the very same military commissions he had once decried.  Rather than reexamine her view that the military commissions approach was idiotic, immoral and unnecessary, Dahlia Lithwick insisted that the administration had “revers[ed] one of its last principled positions” and “surrendered to the bullying, fear-mongering, and demagoguery of those seeking to create two separate kinds of American law.”

The same story could be told with dozens of other examples.  Progressives could have concluded that their earlier opposition to Bush administration policies was misguided.  Instead they’ve consistently concluded that “Obama and the Democrats have completely sold out by any measure.”

What the consistencies between the Bush and Obama administrations mean, of course, is that there are broad swaths of consensus in the foreign policy establishment and in the economic policy establishment regarding what best serves the interests of the United States internationally and economically.  There is a hyper-partisan paralysis on some matters, but on many matters, in spite of claims to the contrary, there is a general consensus (which is not to say that it’s right) on the course to take.  And while it’s easy to inveigh against a President from the opposite party when you’re trying to get elected, when you are the decider, when you face the same intelligence and the same responsibilities as your predecessor, you may find that your former criticisms fade away and your predecessor’s course of action begins to look mighty reasonable.

The legacy of the Left’s extreme Bush hatred, which led them to caricature Bush and scorn and misrepresent the great majority of his policies, policies they otherwise might have found reasonable, has had profound consequences for Obama.  First, when he takes the same course of action that Bush took, however pragmatic it might be, he looks like a sellout to his most ardent supporters and he looks spineless or unprincipled to moderates.  They begin to ask: What does Obama really stand for?  Thus, second, Obama lost, quite early in his administration, a President’s most precious commodity: the trust of the American people.  They no longer knew whether he said what he meant and meant what he said.  And third, this puts him in a tough position entering the election contest.  Obama can deliver the same soaring speeches, but soaring speeches swiftly turn sour when the speaker’s actions contradict his words.

As I’ve written before, the problem with the Obama administration is not the salesmanship; it’s that America no longer trusts that the salesman really believes in what he’s selling.  When hope and change was your mantra the first time around, I really mean it this time is not an inspiring followup.

December 23, 2011 WAR HORSE: The Best Film About a Horse That Does More Than Run in Circles?
Recent Comments
69 Comments | Leave a Comment
Browse Our Archives
Follow Us!

Evangelical
Michael Gerson: Looking Back on a Decade of...
Philosophical Fragments

Will Babies Be in Heaven? (Part 7): God...
For parents who have lost a child, the gospel of Jesus Christ...
view all Evangelical blogs
What Are Your Thoughts?leave a comment