Victory in the Battle of the Bronx UPDATE: Churches Can Continue to Meet

Just a quick news flash: some of you may have been following Bronx Household of Faith V. Board of Education of the City of New York, which challenges the ability of New York City to ban churches from meeting in schools and public buildings.

The good news, which just reached us here at the Alliance Defense Fund conference in Naples, Florida, is that the district court judge has just issued a permanent injunction against the city, which will allow churches meeting in schools to continue to do so indefinitely — or at least until the Second Circuit has an opportunity to reverse that decision. There is a good chance the issue will ultimately land in the Supreme Court, but today’s ruling is an excellent development for those concerned with religious liberty – and especially for all the churches that wondered whether they were going to be turned out on the streets.

UPDATE: Here is a link to the injunction.

You can look here for more information on the case. 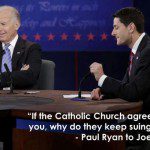