What Would Jesus Wear? (WWJW?)

I hesitate to admit that I’ve put some thought into this question.  This is not due to vanity — although, as you’ll see, I’m certainly not free of that unattractive quality — but due to my interest in mortifying the desires of the flesh and imitating Christ.  Though my wife and friends might be surprised to hear it, I’ve actually given a lot of thought to what I ought to wear.

I first gave it serious reflection when, as a young teenager, I watched the movie Gandhi (starring Ben Kingsley in the title role) and became a big fan.  Ultimately I spent many hours reading the memoirs and writings of Mohandas Gandhi and Mother Teresa, both of whom wore a plain Indian sari.  By wearing plain and crude saris, they identified with the poor of their (adopted or native) homeland.  It was a more political act for Gandhi than it was for Mother Teresa.  By choosing the sari he was rejecting western clothing standards at a critical juncture in India’s struggle for independence from the British empire.  For Mother Teresa, the sari was more spiritual.  If she would share in the lives of the poorest of the poor, she should share in their circumstances and make herself at home in the trappings of their common lot.  The sari is also practical, and by wearing the same thing daily one eludes the temptations of fashion and the distractions of daily sartorial decision-making.

The idea was deeply appealing to me.  Even as late as my college years, I had visions (though, like most of my visions, I never mentioned these to anyone) of abandoning the consumeristic, materialistic concerns of fashion and donning something more like a sari or like a robe that Jesus might have worn in his time and place.  I had, in fact, very little respect for people who dressed too fashionably.  Why should they care so much about something so ephemeral, so superficial?  Why should they try so hard to attract the eyes of others?  Did it matter so much to be noticed?

Invariably, I came back to the same answer: while the sari would not attract attention in the slums of India, or while a tunic/robe would blend in perfectly for Jesus’ apostles in first-century Palestine, they would be like blaring neon “LOOK AT ME” signs there at an American university.  While I would not be attracting attention for the purpose of showing how hip and worldly I am, I would be attracting attention for the purpose of showing how different and otherworldly I am.  I considered leaving my hair unkempt, or shaving it monk-like, or growing dread-locks, but it occurred to me that I would be like those teenagers who muss their hair just so, who wrinkle their clothes just like this, who buy jeans ripped just like that, and who adopt the unshaven and slovenly and disinterested look — who, in other words, go to extraordinary lengths to attract everyone’s attention in order to communicate, in flat self-contradiction, how little they care what other people think.  I want you to look and think very hard about how little I care what you think of me. Except my variation would be, I want you to look and think very hard about how holy I am because I have rejected western clothing standards.  If I had worn a sari around the Stanford campus, my pretentious anti-fashion would be attracting far more attention than any outfit in GQ could possibly be, all for the sake of flattering my spiritual pride.

Now, before I go much further, don’t get me wrong.  Fashion, rare though this is (in my opinion), can be an important and eloquent form of self-expression.  While I fear that our sartorial decisions are most often swayed by what we think other people want or expect us to wear, by the determination to fit in with our desired social circle, or by simple vanity, there are those who do it well.  They do not dress according to who they think others want them to be but according to who they are and aspire to be, and that can be a fine thing.  So I do not mean to reject fashion entirely.  Most of my friends dress more for comfort and professional presentability, but some ride the clothing cutting edge and do it well.  There are also some ways in which we can, with our clothing and with other outside-the-body markers, provide visual reminders for others and for ourselves of the ways in which we want to live our lives.  A tattoo, a bracelet, or a tattered shirt can serve as a reminder that we are God’s and we should live in ways that reflect his truth. 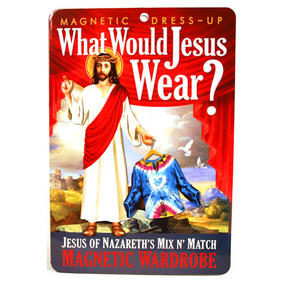 So, how do you determine what to wear?  What are the values, the priorities, the rules of thumb that guide your choice of clothing on different occasions? Jesus tells us not to worry over our clothing, by which he means not to worry whether we will have clothing, trusting that God will provide, but he provides little guidance at all regarding what to wear.  Elsewhere in the scriptures, we are encouraged to dress humbly and modestly, not tempting others to sin, and to dress in ways that are sensitive to the local culture and will not harm our witness.  What biblical guidance have you found especially helpful?

So I ask myself, What is the equivalent of a sari in contemporary American culture?  If Jesus wore a tunic or robe back in first-century Palestine, what would be the equivalent in twenty-first century America?

My answer: jeans and a t-shirt.  That’s what I wear.  How about you?

June 29, 2012
Victory in the Battle of the Bronx UPDATE: Churches Can Continue to Meet
Next Post