Why Evangelicals Should Defend Mormons from Mockery, Part 1

At a recent meeting of the Faith Angle Forum, Richard Mouw of Fuller Seminary, one of the elder statesmen of American evangelicalism, told a story of attending a series of talks in the 1950s by Walter Martin, a famous counter-cult apologist.  In the fourth lecture, Martin spoke of Mormonism.  Mouw recalls:

We knew that there were a lot of Mormons there because they came and filled the first two rows…And Walter Martin did his very harsh attack on Mormonism. Later on he was to publish a book that’s been sort of a classic in the counter-cult movement called The Kingdom of the Cults. But he was rehearsing those things at the time in public speeches and he really went after Mormonism.

In the Q&A, a very articulate young Mormon man stood up, and they went back and forth quite a bit.  The Mormon was insisting that Walter Martin misunderstood Mormonism on the atonement of Christ and Walter Martin simply would not give in.  And they got almost into a shouting match and at a certain point the young man, with tears flowing down his face because Martin had been pretty rough on him, said, “I don’t care what you say, Dr. Martin.  I believe that my sins have been forgiven by the atoning work of Jesus Christ on Calvary and nothing that you can say can change that conviction.”  And Martin turned to the audience and said, “See how they lie?”

For another sterling example of neighborly love, consider these words from internet evangelist Bill Keller: “It is no wonder why God is judging this nation by giving us a choice between two sons of Satan when high profile men of God like Billy Graham and supposed Christian leaders like Ralph Reed, Mark DeMoss, David Barton, and scores of others are publicly telling Christians that it is OK to compromise their faith and put temporal politics over the eternal souls of men to support a Baal worshipper.” 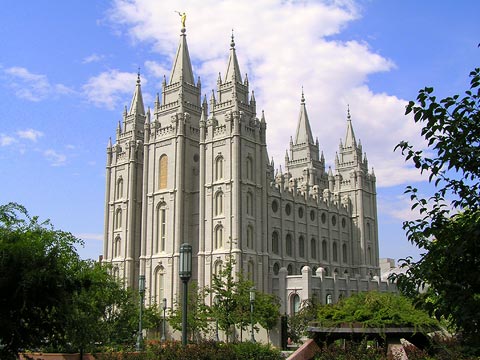 Well, then!  Yesterday I published an insta-interview with an anonymous individual who is posting videos, recorded on hidden cameras, of the sacred rituals that take place in the Temple.  The intentions in publishing the video are clearly to raise questions about Mormonism and about Romney.  I told “Noah” in advance that I had moral misgivings about his behavior.  He claims to have footage of Mitt in a Temple ceremony from June 2011, which he has not yet published due to legal concerns.

Let’s put the politics aside for the moment.  I promised to offer my own assessment of these videos.  But first I feel like I need to say something about evangelicals and Mormons.

The ways in which evangelicals have treated Mormons have often been shameful.  To be sure, there some bright spots.  High-level evangelical-Mormon conversations are taking place even now and are clearly edifying both sides.  Mormon leaders have been receptive to evangelical experts in historical theology, and have learned why the church historically has avoided some of the formulations Mormons use.  The trajectory of Mormonism’s development is a positive one.  Yet evangelicals have also, before and alongside these more charitable recent efforts, caricatured Mormons and perpetuated falsehoods about the official doctrines and teachings of the LDS Church.  We have marginalized and ostracized Mormons and generally treated them with heaping measures of suspicion and contempt.

The reason why evangelicals have been particularly zealous in marginalizing Mormons is clear.  When I was a child, I felt a sense of kinship with the Mormons in my classes because we had some similar moral and theological convictions — from the existence of God to chastity before marriage.  Yet I was warned in my church against the dangerousness of their beliefs and the dishonesty of their proselytizing methods.  It was obvious even then that Mormonism was regarded as a serious competitor.  Faith groups that did not proselytize were less threatening.  Yet Mormons are just as eager (and often more eager) to share their beliefs, so the evangelical churches watched the growth of Mormon churches in their communities with grave concern.

I could frame this cynically as a struggle for market share, but that would fail to understand evangelicalism.  To explain: evangelicals do not believe that we are reconciled to God by performing the right moral actions or consenting to the right doctrinal beliefs.  Rather, we believe that we’re reconciled to God and begin an eternal relationship with him when we repent and give ourselves wholly to him, living in the forgiveness and love and mission he gave the world in Christ.  Yet this implies certain beliefs regarding the divinity and the work of Christ, the nature of God and sin, grace and the church, without which it’s impossible fully to understand and live that relationship.  Since false beliefs can have eternal consequences, then, one of the most compassionate things we can do for this and future generations is defend right doctrine and preserve its purity.

Evangelical anxiety over the growth of Mormonism generally represents an earnest concern that souls could be led astray.  Mormonism was often framed as a plot of the Deceiver, a brilliant maneuver in the cosmic theater of spiritual warfare.  That which is patently false is less dangerous than that which presents the semblance but not the essence of truth.  Mimicking Christianity, Mormonism attracts the unwary by teaching the truth on non-essential matters in order to mislead them on essential matters.

Evangelicals are not wrong to be concerned about the growth of Mormonism.  The truth matters, and I like many of my evangelical brethren am convinced that Mormonism does not fully teach the truth of Jesus Christ and his gospel.  But we are wrong to let that concern, that suspicion, that fear, drive us to treat Mormons worse than any other religious group in America.  It’s not a matter of compromising our commitments to truth, but of fulfilling our commitments to love.  Just as it would not be loving to let the saving truth of Jesus Christ be distorted, for in that truth is the liberating message of God’s forgiveness and provision for all people, so it’s not loving to misrepresent what Mormons believe and condemn them in vicious and exaggerated tones.

More to the point, it’s unloving to communicate the truth in such an unloving manner that our hearers conclude that whatever is delivered by people who behave in this way cannot possibly be true.  God’s Word comes to us “full of grace and truth.”  It is never morally or Christianly acceptable to secure the truth by abandoning grace.  The end does not justify the means.

What true message of transformative grace, our listeners wonder, could come from messengers so untransformed by grace?

Sadly, if I were to judge between evangelicals and Mormons solely on the basis of their behavior toward one another, I cannot say that I would choose evangelicalism.  I do choose evangelical fellowship because the choice is more complex, because Mormon teachings (in my view) are mistaken on important issues, because I think very many evangelicals are honestly deceived about Mormonism, and because I myself have seen what extraordinarily loving and gracious people evangelicals can be.  But I wish I could say that evangelicals had distinguished themselves in this relationship by their grace, their compassion, and their meticulous determination to get the facts about Mormonism right.

Tomorrow — please subscribe by RSS or Facebook or Twitter — I’ll address the question of how evangelicals should respond to hidden videos that seek to humiliate Mormons.  We cannot stand with Mormons on some matters.  But we can stand with them here.  Here we can witness the love and grace that has too often been missing from our witness to Mormons.