Mark D. Roberts, Patheos/Mark D. Roberts: “In Advent, we prepare for the coming of Christ. In fact, we are actually getting our hearts ready for two advents: the first which happened 2,000 years ago in a stable near Bethlehem, the second which is yet to come, when Christ returns to establish fully the kingdom of God.”

Bill Blankschaen, Patheos/Bill in the Blanks: “My greatest concern — dare I call it fear — is that marriage, once legally redefined, will be used as an ideological bludgeon to further pummel us into compliance with a worldview anti-thetical to our Faith.”

Alexei Laushkin, Patheos/The Earth Is the Lord’s: “But when leaders who have dedicated their lives to alleviating poverty raise the alarm about the climate crisis, maybe it’s time for people of goodwill to take action.” 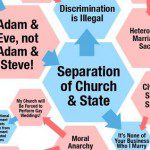