In England, More Jedi Knights than Atheists and Pagans Combined

Have you asked Yoda into your heart?  Perhaps you should visualize a higher midichlorian count.  As the Telegraph reports:

Following a nationwide campaign, Jedi made it onto the 2001 census, with 390,127 people identifying themselves a decade ago as followers of the fictional Star Wars creed.

Although the number of Jedis has dropped by more than 50 per cent over the previous 10 years, they are still the most selected “alternative” faith on the Census, and constitute 0.31% of all people’s stated religious affiliation in England and Wales.

I’m sure we’ll see articles soon lamenting the exodus of followers from the Jedi faith.  The Jedi do seem to have a hard time protecting children in their Temples and convincing their teenagers to resist the temptations of the Dark Side. 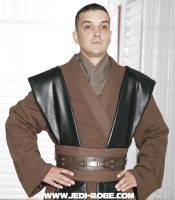 It’s hard to know how seriously to take this.  But George Lucas essentially took some mythic tropes, stuck them together with vague New Agey concepts of “balance” and “flow” and “let go” and “the force,” gave it an ostensible scientific basis in, you know, the science of midichlorians, and then portrayed heroic monks of the faith combatting unmistakable evil.  It’s designed to be appealing.  The Jedi Church websites says: “The Jedi Church believes that there is one all powerful force that binds all things in the universe together.  The Jedi religion is something innate inside everyone [sic] of us, the Jedi Church believes that our sense of morality is innate.  So quiet your mind and listen to the force within you!”

If you’re not going to believe anything else, why not believe in the Jedi faith?  What do you have to lose?

The Census report goes on to say that over six thousand people subscribe to “the Heavy Metal religion,” which was devised in 2010 by Metal Hammer magazine.  Far, far more common (to the tune of 13.8 million) were those who refused to identify with any faith, ticking “No religion,” and 4 million did not answer the question.

It’s easy to scoff at this, of course (and we can count the minutes until an atheist, or perhaps a Jedi Knight, leaves a silly note that Christian beliefs are just as absurd).  It would also be easy to cite G.K. Chesterton’s famous (and unsourced) epigram that the problem with those who cease to believe in God is not that they will believe nothing, but that they will believe anything.  Gallup’s 2008 “What Americans Really Believe” study (with Baylor’s Institutes for the Study of Religion) found that the “irreligious” were far more likely than evangelicals to believe in paranormal pseudoscience like palm reading and divination, haunted houses and Atlantis and mythical monsters like Bigfoot and Loch Ness.  Or witness the ridiculous enthusiasm today for the Mayan Apocalypse theory.

Jesus, however, rarely walked the easy road.  I wonder what Jesus would have thought of this?  If the imitation of Christ is our guide to action, what should our response be?

Jesus was not afraid to correct the Samaritan Woman he met at the well, but he addressed her more pastorally than pedagogically.  He saw in her actions a yearning for God and a confusion over where God is to be found.  I believe that Jesus would look with compassion on those who are lost and those who are confused, those who are afflicted with doubts and fears.

I’m less disturbed by the 176,000 who ticked off “Jedi Knight” than the 14 million who chose “No religion.”  In fact, you might say that the Census does more to challenge than to confirm the epigram of Pseudo-Chesterton.  But it’s more complicated than that.  What else do those 14 million believe?  What are their beliefs and superstitions?  Perhaps they participate in the religion of celebrity-worship.  Perhaps they worship themselves.  Perhaps they venerate wealth and leisure.  Perhaps they have placed their faith in a politician or a party, a cause or a philosophy.

I would much rather see people seeking, restlessly seeking, than “resting” in faithlessness or losing themselves in materialism and petty distractions.  What do Christians say to those who claim they have no need for faith?