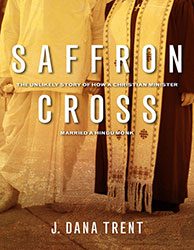 In my few travels to other lands, Hindu India has always struck me as a place where spirituality is in the air; it is almost palpable, in way that is unique to it, and unusual to the West. Reading Saffron Cross brought this feeling back to me in a powerful way. The book is J. Dana Trent’s recounting of her interfaith marriage to a western man who is a very devout Hindu, and a former monk. Trent herself is an ordained Baptist minister. Of course, by the fact that she is a woman and an ordained minister, it is obvious that she is not a conservative Baptist, but still, challenges abound.

Saffron Cross is a very good, very thought-provoking, and well-written book. How she came to be married to Fred, (whose Hindu name is Gauravani), and the first few years of their marriage is a large part of the narrative and, reading their story, I’ve learned much more than I ever knew about Hinduism. The main focus of the book details how this couple combined their respective religions and backgrounds into a working, healthy relationship.  The story is, frankly, fascinating. Dana contends – and gives good evidence for the fact – that her relationship with Fred and his Hinduism has deepened her relationship with God, and has made her a better Christian.

Not everyone will agree with her theological conclusions. In fact, that is one of the things I wish she had covered. Surely not everyone she knew was fully in favor of their marriage, and I wish she had written about the objections they must have had to deal with from friends or relatives.  I’m not sure I agree with her theological conclusions myself, but the story is intriguing and I don’t want to give anything away.

My favorite parts of the book were about her experiences in India and at their 10 day retreat in Northern California.  Questions and concerns that arose as I read were dealt with in the latter portion.

The honesty and openness with which Dana Trent writes makes the reader feel like an acquaintance and I hope she does not stop with this one book but continues to write about her life of faith within the challenge of an interfaith marriage. She and her husband haven’t been married very long and it will be interesting see happens in the coming years.  Nothing was written about future children and what those children’s religious education will entail.  Having children intensifies family dynamics and puts new pressures on a couple’s relationship.

My interest isn’t altogether impersonal; I read Saffron Cross from the perspective of an adult convert to Catholicism whose husband has remained within the Evangelical church, where he returned to ministry as a pastor for nine years – at one point a close friend consoled my husband as though I had died (“I’m so sorry!”). One thing I learned was; although it was fairly easy to compromise in areas that weren’t important, it was hard not to compromise in areas that mattered to me. He is no longer pastoring a church, but this review is, in a way, my Catholic “outing”, as a lot of our friends who may read this review still don’t know.

So, Dana – excuse the informality, but your up-close-and-personal book makes me feel like I know you – this is one reason why I want to know how your story continues. Marriage is hard, and interfaith marriage is harder still.  I want to know if you can maintain your emotional intimacy through what the coming years bring.  Keep writing!

Saffron Cross is featured at the Patheos Book Club this month; see here for more conversation and to read an excerpt! 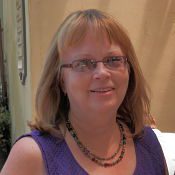 Laurel is a child of God, a third generation Northern Californian who came of age in the “hippie” days. Her passions are her family, music, reading good writing, nature and dogs. And maybe chocolate and wine.

April 2, 2014
Understanding a More Religious and Assertive Russia
Next Post