The Rings of the Lord

Jesus had an inner circle. The Bible offers plenty of examples. As a matter of fact, he had several circles or rings of relationship around him.

When the mother of James and John asked Jesus to allow her sons to enter one of those rings, he did not deny her request. However, he did ask them an important question: “Can you drink the cup I am going to drink?” (Matt. 20:22). She did not fully comprehend the magnitude of her request, but Jesus certainly did.

Pastor and author J. Oswald Sanders said, “We are as close to God as we choose to be.”1 God has made it perfectly clear he is vitally interested in being close to every man and woman he has made.

One of my great concerns for the church, however, is that we not only challenge people to grow closer to Jesus, but that we also find ways to help them know when they are doing just that. After all, what would it be like to meet with an athletic coach week after week for years and hear him say again and again, “Win the game!” but he never lets you play? Or you never find out whether you actually are growing and improving as an athlete? But many Christ followers feel exactly that way. Their leaders and the Bible regularly challenge them to grow, and yet they remain uncertain about whether they actually are growing.

Consider the rings of relationships that gravitated around Jesus as he walked this planet. I call them the “Rings of the Lord” or the “Circles of Christ.” An overview of the Gospels shows there were at least six identifiable groups around Jesus:

Each of the six rings of relationship around Jesus was char­acterized by something important, even developmental, in our relationship to God. Let’s take a quick tour of each:

THE CROWDS. The outermost ring of association with Jesus and the first one we come to is the Crowds. Crowds started to gather around Jesus early in his ministry. These groups at times probably numbered in the tens of thousands and perhaps more. On one occasion, the Pharisees were so astounded by the Crowds they said, “Look, the world has gone after him” (John 12:19 esv).

Among all the circles of relationship around Jesus, the Crowds were the most impressive in size and yet often the least impressive in soul and substance. The Crowds were the most loosely committed bunch then and still are today. Nonetheless, they represent an important, even precious, place—the place in which all Jesus’ followers begin their journey.

The experience of knowing Christ is more of a lifelong jour­ney than a momentary experience. It is related to not just our position on doctrines but our personal choice in pursuing our relationship with Christ and our proximity to him.

The Crowds represent those who follow Jesus to the places of watching and listening. They come to watch what Jesus might do and to hear what he has to say. This place requires the least commitment. It was from this ocean of observers, however, that several fish were eventually caught in Christ’s net.

THE FIVE THOUSAND. The Five Thousand did more than observe and evaluate Jesus as he touched and helped them. This group followed him into the desert, desperate not to miss even one of his miraculous works of healing or provi­sion (John 6:1–15).

The Five Thousand represent those who follow Jesus to the places of feeding and healing. They joyfully discovered then, and still do today, that Jesus has many truths to teach and many gifts to offer. Although Jesus willingly and lovingly met so many of their needs and led them to this place, he did not want them to stay there.

THE SEVENTY. Next were the Seventy. Out of the larger groups, a select team rose up to share in Jesus’ ministry. You might say these people left the ring of observation and entered the ring of participation. The Seventy would do the same works they had seen Jesus do.

The Seventy represent those who follow Jesus to the places of working and serving. To this day, many followers of Jesus make it to this ring in their relationship with him but go no farther. Yes, ministry was and is important, but Jesus wanted them to under­stand that his call was not primarily to work harder but to come closer to him. That’s what this book and this journey are all about.

THE TWELVE. The ring most familiar to us is the Twelve, Jesus’ beloved band of brothers, his chosen disciples: “One of those days Jesus went out to a mountainside to pray, and spent the night praying to God. When morning came, he called his disciples to him and chose twelve of them, whom he also des­ignated apostles” (Luke 6:12–13, emphasis mine). Christ called this “Shepherd’s dozen” to leave all they had and follow him.

The Twelve represent those who walk with Jesus to the places of leaving all and following him. As they entered this ring, they left their own wishes and selfish desires and entered into a new place of surrender to Jesus. But as close to Christ as this ring was, there were closer places still.

THE THREE. One of the innermost circles around Jesus was his cabinet of Three. Church history respectfully dubbed this ring the Triumvirate. Triumvirate is a Latin term that refers to a powerful team of three individuals. Of all Jesus’ disciples, there were three who saw, heard, and experienced the most.

The Three represent those who follow Jesus to the places of glory and suffering. These were the confidants of Christ. He entrusted them with insights and experiences the rest of the Twelve were apparently unprepared to hear or know.

THE ONE. Ultimately only one person bears the distinction of having been the closest person to Christ during his earthly ministry. I like to think of this person as the One, the closest One.

The One sat right next to Jesus at the Last Supper. The One listened closer to Jesus’ words than anyone else and, as a result, recorded more of them than anyone else. The One was the go-to man when Jesus’ disciples had a question they wanted to ask him. The One spotted Jesus on the shore when no one else in the boat recognized him. The One followed Christ to at least one place no other among the Twelve would go. 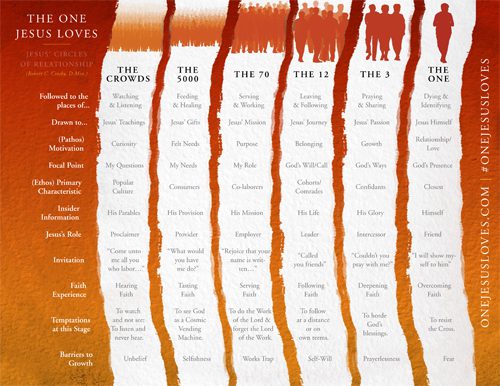 Our desire for God is a gift we must regularly open and engage if we are to fully realize and enjoy it. While salvation is an uncondi­tional gift of God’s grace, some intimacies with God come only with a relentless pursuit of him.

Author and pastor A. W. Tozer warned against rigid and overly structured approaches to God and faith: “The whole transaction of religious conversion has been made mechanical and spiritless. . . . We [must remember] that God is a Person and, as such, can be cultivated as any person can.”2

The promise of Scripture affirms his glorious invitation: “Come near to God and he will come near to you” (James 4:8, emphasis mine). Make no mistake, there is one place and one place alone to which Christ wants you to be when it comes to him, and that is closer.

Remember . . . followers of Jesus refuse to follow at a distance; if you’re not moving closer, 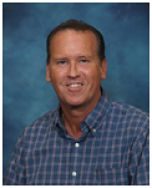 Robert Crosby is a conference speaker, writer, and pastoral leader.  He has pastored Churches in New York, Boston and Ohio and served as a University Vice President.  He is currently a professor of practical theology at Southeastern University in Lakeland, Florida.   He writes for Christianity Today, Patheos.com, Leadership Journal, Outreach Magazine and the Huffington Post.  He and his wife, Pamela, are the founders of Teaming Life Conferences & Resources. The new book, The One Jesus Loves, consists of 40 short chapters ideally suited for a 40-Day personal reading, small group interactions or a whole-church 40-Day event.

June 7, 2014
Why Southern Baptists Quiesced and What to Do - Part 2
Next Post