“When The Game Stands Tall” – It’s Not About The Game. 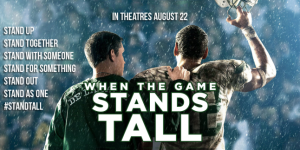 When a movie gives me perspective on where I’m at here and now in my life, I give it a thumbs up. In all honesty the new movie When The Game Stands Tall (in theaters tomorrow) surprised me in this regard.

Let’s face it. I’m the kind of person who, with the exception of this year’s Super Bowl, watches the biggest football game of the year for…the commercials and the party. (This year was different since the Seattle Seahawks were playing, but then it really turned into a boring game when the poor Broncos seemed  to forget that they were in fact on the field to play football.)

The movie tells the story of Coach Bob Ladoucer (Jim Caveziel) who took a high school football team, the Spartans of De La Salle High School in Concord, California, on a record setting winning streak of 151 games. Even if you’re not a football fan, you know that there’s got to be a compelling story here. And there is.

Ladoucer is a man with a vocation, one which he’s somewhat aware of at the beginning of the movie but he’s not brought to a full awareness of it until the end. He and his family live a modest lifestyle, largely because of his decision to teach and coach at a Catholic high school in spite of better paying offers to coach elsewhere. His passion also comes at a personal cost to both himself and his family. Yet, he wouldn’t be the man that he is if he did something else, an understanding that develops in the course of the movie.

You see, the coaching and the football are not about winning, though it’s clear that the players don’t exactly understand this. But Ladoucer is giving them the tools of a lifetime. Football is the means, not the end. In many ways, this movie is a great reminder of what should guide our decision making in anything that we do, including sports.

Traditionally, sports have been about more than the game, more than winning. It’s about the virtues and becoming a better person. Like the rugby movie Invictus, When The Game Stands Tall, draws out significance of teamwork. When I wrote about Invictus, I referenced a championship rugby match in which, if you watch the clip carefully, every player on the team handles the ball during a key play.

Obviously football is a different game. For one thing, the players wear padding. But the same idea of teamwork is absolutely essential… for a winning streak like that of the Spartans. When the teamwork falls apart, so does the winning streak.

At the beginning of the movie, Ladoucer is asked about the streak. But he really doesn’t care. He responds, “Winning a lot of games is doable. Teaching kids there’s more to life – that’s hard.”

Ladoucer is teaching his players that we’re not random beings in some abstract game of life. Instead we are concrete individuals with a purpose…should we choose to embrace it. In the end the it’s not about the game, it’s about deciding who you want to be, who you are, and making the choices to fulfill that calling. While the coach is passing on this important life skill to his team, he’s learning it in a very personal level in his own life. He’s part of the team, too.

It took me a little while to get into the movie; I think in part because there were too many threads in the story at the beginning. But the story picks up, as does the acting and the film depiction. The game scenes are particularly good. But in some ways, it’s a hard movie to watch. It’s a movie centered on a high school story with some very adult themes. [Adult as in grown up, not porn.] But then that’s what high school and being a teenager should be about – becoming an adult. Leaving childhood behind, sometimes brutally, and making the choice to grow up.

And growing up, becoming who we are called to be, is a lifelong process. At the beginning of the movie, I was asking myself the same questions Ladoucer and his family were asking: Why not move on to greener pastures, to something more lucrative? By the end of the movie, we all knew. It’s not about the game. It’s about who you’re called to be. It’s about vocation.

The movie’s worth the price of the ticket. See it now. Don’t wait for Redbox, Netflix, Amazon Prime, or whatever is your preferred delayed method of watching movies.

Render Unto to Ceasar ... What...
Public Catholic
Related posts from Pia de Solenni

Dark Devotional: Chapel Purgatorio
A violent squall came up and waves were breaking over the boat,...
view all Catholic blogs
What Are Your Thoughts?leave a comment
Copyright 2008-2021, Patheos. All rights reserved.