Good Question: Why Is There A Menorah On The Altar?

If anything, worshipping at a liturgical church has enhanced my gratitude for years of Jewish education and synagogue attendance. Studying the two thousand years of Jewish history pre-dating Jesus’ birth has helped me appreciate the structure and content of Christian liturgy as well as the sacraments of Baptism and Holy Communion. It has helped me understand how Confirmation could sometimes be characterized as a ‘sacrament in search of a theology.’ And it certainly enhances my worship experience each and every time I participate in liturgy – either from the pews as a congregant, from the loft as a choir member, or from the ambo as a lector. – Meredith Gould 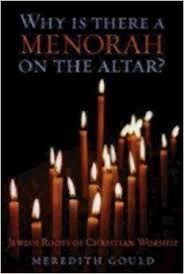 Gould is an apt interpreter of history and practice for her brothers and sisters in faith who attend liturgical churches. Her book, Why Is There A Menorah On The Altar? Jewish Roots of Christian Worship (Seabury, 2009), is a guide that makes essential connections between Jewish worship and the formal Christian liturgy that emerged from it. She covers how to approach the reading of Scripture, offers a brief look a why Jewish history matters to Christian worshippers, and then tackles the foundations of the sacraments of baptism, the eucharist, and confirmation. While her primary audience are those who’ve grown up in Catholic, Episcopalian/Anglican, or Lutheran churches, you who attend churches that don’t use formal liturgy will find the book of value as well.

Gould grew up in a Reform Jewish home, and applies both her own experience and her academic training (she holds a Ph.D. in sociology) to the questions surrounding Jewish roots and Christian practice. Though there’s plenty of solid research backing the information in Menorah, Gould’s wit and bridge-building instincts make this a practical book for Christians who want to understand why we worship the way we do. In addition, sidebars offer additional insight to readers. Here, she shows how she brings the Jewish method of learning by argument and questioning to mass with her:

Here’s what I tote to church when I’m traveling light: my very own Missalette-devotional combo, a purple pen, a yellow highlighter, and my prayer notebook. If I’m sticking around for devotions, I’ll bring a bible.

I’ve been known to dog-ear pages of my Missalett-devotional combo as the Word is being proclaimed. I’ll jot down debate points during the homily, even though I know I won’t leap up out of the pew to argue. Instead, I circle verses in purple or highlight them in yellow. I ponder how, if given the opportunity, I might crack open the Word for fellow congregants. I wonder if I’m in the presence of blog fodder. I’ll later write about my wonderings on my blog.

I’m not being inattentive or disrespectful. I’m honoring my longstanding devotion of learning and commentary. Whenever there’s a break in tefiliah (prayer), I default to midrash (interpretation).

The book’s six chapters are rounded out with a timeline of how Christianity emerged from Judaism, a glossary, and a number of documents from various mainline denominations relevant to Jewish-Christian dialogue. Gould wants her readers to appreciate the continuity between the Judaism and Christianity as they worship, and gain clarity about the errant ways in which a wrong understanding of this continuity has led to disastrous consequences for the Jewish people, and warped identity for generations of Christians. If you’re interested in worship, and especially if you’re interested in formal liturgy, this little volume would be a wonderful addition to your library.

Note: I first “met” Gould on Twitter, and a few years of 140-character exchanges and the opportunity to blurb her new book led to an “in real life” meeting in March at the Festival of Faith and Writing. We ate sushi in Grand Rapids (which kind of sounds like an oxymoron, if you think about it) and swapped stories around the theme of “How did two nice Jewish girls end up in the church?” Though we’ve often swum in different streams of the church, it was great fun bonding over our shared longing to help grafted-in Gentile believers in our Jewish Messiah Jesus drink deeply from the living water-sap that flows from root to branch.

June 13, 2016 How I'm Learning To Love God With My Mind
Recent Comments
0 | Leave a Comment
"The problem of Nepotism within church is really only an issue because we run church ..."
Roland Pope Nepotism And The Local Church: A ..."
"Followed a link from CT. I find this to true. The church I attend doesn’t ..."
Texaninthesnow 40+ And The Church/Pastoring Those In ..."
"This has recently just occurred at my church and my concern has been the children. ..."
RenewingmymindDaily The Collateral Damage From A Youth ..."
"Childishness, Richard. I keep telling you to try grow up."
rose white Old Testament Foundations And Hebrew Roots
Browse Our Archives
Follow Us!

Church Closings and Church Reopenings
Today many churches are reopening up, probably largely thanks to the comments...
view all Evangelical blogs
What Are Your Thoughts?leave a comment
Copyright 2008-2020, Patheos. All rights reserved.