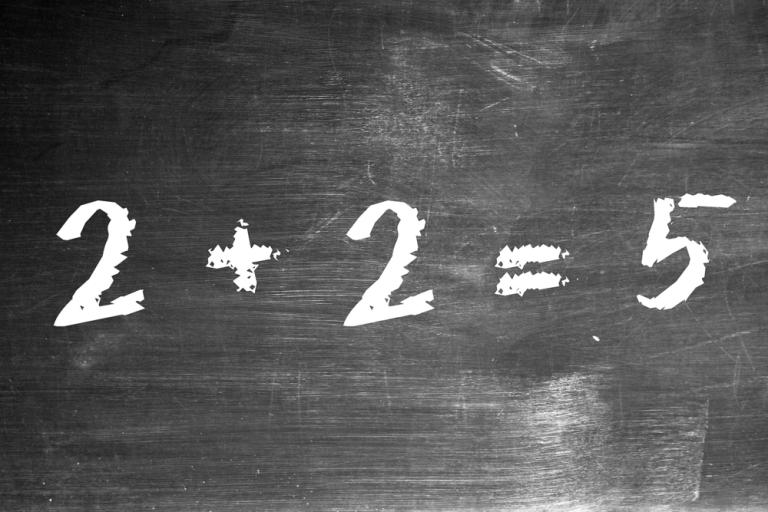 George Orwell’s monumental political novel, 1984, has been used almost endlessly since it was originally published to impugn administrations, companies, and all manner of authorities that are perceived as too powerful. It’s become such an inextricable part of our cultural vocabulary that it seems difficult to imagine our political conversation if it didn’t exist. But beyond the novel’s warnings about powerful governments and political doublespeak, one quote that has remained with me ever since I first read the novel seems more important than ever in 2016.

“There was truth and there was untruth, and if you clung to the truth even against the whole world, you were not mad.”

Contemporary politics has always involved exaggeration and equivocation (regrettably, perhaps necessarily). There can be endless debates about when it began, who’s to blame, and who should fact-check. But 2016 signals some new kind of shift from exploiting the nuanced shades of language to a radical attempt to entirely reject the sentiment Orwell expressed in 1984.

In the first debate of the general election, Donald Trump denied he originally supported the invasion of Iraq; he denied he continued to perpetuate birtherism after President Obama produced his birth certificate; he mischaracterized the outcome of Floyd v. City of New York so severely as to either suggest outright deception or an alarming lack of understanding of the American court system; he denied that he claimed climate change was a Chinese-sponsored hoax; he lied about Ford job losses; he continued to purposefully mischaracterize the role his father played in his business success and his previous comments on women.

This is not an ordinary election of misleading self-interested candidate versus misleading self-interested candidate. All politicians take advantage of linguistic wiggle room; all politicians cherry pick statistics or details for their agenda. This is not what Donald Trump does. Donald Trump marks the end of objective truth for many Americans—an attitude which has been silently, pervasively de rigueur for years with many—and which will inevitably only unmoor us further from the agreed reality upon which society depends. Confronted with his own words—on support for the Iraq invasion, on his role in perpetuating the myth of Obama’s birthplace, on the language he has used to describe women and minorities, to name only a few—Donald’s lazy but repetitive denials seem to work in persuading his supporters that he “alone” can define what did or didn’t happen. In attacking his undeniably policy-wonk opponent, Donald hides behind the “policy” blurbs and empty blog posts on his own website. Donald Trump is exploiting this breakdown between truth and untruth to foster and amplify persistent hatreds among many Americans bred and born by a changing society in which straight, cis-gendered, white Christians are suddenly no longer “more equal” than the rest of us. In this wasteland of meaninglessness, Trump pries open the darkest immoral cracks in the façade of American exceptionalism and gives these hatreds license to come out into the light.

Absent some stable connection between word and meaning, there can be no culture, no political tradition, no Western civilization. And it’s in this miasma of truth and untruth (never one and always both) that Trump’s win or loss in November will leave us to wander like disconnected refugees, incapable of communicating, babbling incomprehensibly at one another like another shattered people at the crumbling base of their Tower.

It’s undeniable that in many ways our society is captivated (perhaps paralyzed) by a moment of nostalgia, if it can be called that. More fittingly, it might be called false nostalgia, the longing for a place we’ve never been. Society itself has answered that longing as much in Mad Men and Downton Abbey as in the hearkening anthem to “Make America Great Again.” Arguably from the beginning, American politics has been an exercise in civilizational, aspirational apotheosis: the longing insistence that “America’s best days are ahead of it” or that “it’s (only) Morning in America.” And as much as “make America great again” seeks to coddle its supplicants into believing that America can be great “again,” it is inseparably the act of a people looking backward, an exercise in reversal befitting Lot’s wife. It echoes with the wilting enthusiasm of a defeated ego. It is not the message Americans deserve, but when the message has been drained of any meaning, it’s the only message we’re going to get. And if we can’t agree on this, then we truly have no common language in which we can communicate anymore.

Each candidate, each party has interest in framing this election about “the stakes,” “the future of our country,” or the particular set of interests one group or another finds critically important this year. But despite party, despite personality, despite routine political exaggeration and equivocation, there is truth and there is untruth and Donald Trump singularly jeopardizes this distinction.

Matthew Snider writes on culture, religion, and politics from Maryland. He can be found on Twitter @matthewsnider.