Evangelicals and Trump: A Tipping Point 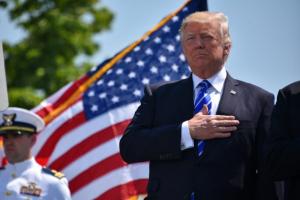 I grew up as an evangelical, but over the last few years, it has become increasingly difficult to identify with the political agenda of evangelicals.

Why? Evangelicals have often supported discriminatory laws against LGBTQIA people in the name of freedom of speech, not favored immigrant reform, and treated Muslims with suspicion. White evangelicals, in particular, have not consistently acknowledged our long history of systemic racism in America up to our present day. My difficulty only escalated when white evangelicals voted for Donald J. Trump in droves in the 2016 election.

For evangelicals, Trump’s presidency meant at least a few things: executive policies that attempt to limit abortions, conservative judges appointed to the Supreme Court, policies supporting American made products as a matter of economic priority, and being extremely “tough” on Iran.

But evangelicals got more than they asked for with Donald Trump. While he has made good on his promises to conservatives and evangelicals with his policies, many evangelicals have discovered this has come at a high cost.

In Trump’s world, political victories just like economic victories come by maintaining power and recognition and by gaslighting anyone who gets in his way. Maintaining the appearance of control has meant never taking responsibility for his actions. This has become increasingly apparent during the Coronavirus pandemic and his response to the protests following the murder of George Floyd.

When challenged about his belabored response to the Novel Coronavirus, Trump routinely downplayed the pandemic claiming it was “under control” and suggesting those who got it will recover quickly. The irony of course is that nearly everyone he was referring to in that initial epicenter of Kirkland, WA would eventually die from Covid-19.

We might give him a pass if he had taken responsibility for his false claims, but they only got worse. His weekly Twitter feed, his interviews and rallies in the months of February and March were filled with outrageous claims, one time calling it the new “hoax” of the Democrats, other times comparing it to the seasonal flu, all the while not taking the necessary steps to create a clear national plan of attack. While the task force, led by Mike Pence, eventually provided guidelines to deal with the pandemic, they were not federally mandated which left room for many Americans to fudge.

Things only got worse during the George Floyd protests. Instead of showing true empathy toward our black communities over the patterns of systemic (or structural) racism that continues to poke its head up in our country’s recent and distant past, he chose to use his platform to ridicule the protesters. Granted there were a large number of agitators looting and demonstrating violent behavior toward local police, and that definitely needed to be dealt with, the rhetoric Trump chose to use during his speeches following the first protests were dismissive and hostile. What the black community and what all of America needed was a president that had compassion on the unnecessary and cruel murder of another black man. Instead they got the heavy handed “law and order” speech that only escalated the situation. Even worse, America saw a president who would rather fight for southern rights to keep the confederate flag up where they so choose and military bases named after Confederate soldiers during the Civil War.

The disconnect couldn’t be any more real.

When asked by reporters about how he handled both the pandemic and the protests, he consistently turned to gaslighting. For Trump, this has meant routinely shaming interviewers and reporters for asking the question to begin with. He reverts to harsh and belittling name-calling and publicly doubting ones credentials instead of answering questions openly and honestly.

If gaslighting won’t work, he reverts to lying. Trump’s lying is so habitual, it’s led many people to believe he is a pathological liar. He’s either convinced his own lies are the truth or he’s a very good actor. According to The Washington Post, Trump has exceeded 20,000 lies just within just the last year. We might estimate somewhere between 50,000 to 70,000 lies total if his previous two and half years were anything like this last year.

As Trump normalizes lying, gaslighting and refusing to take responsibility for his actions, we would rightly ask if he is setting a reckless standard for future presidents.

Because of the high cost, will evangelicals (who often pride themselves as being proponents of truth and speaking the truth in love as the New Testament instructs) reconsider voting for Trump a second time around?

Peter E. Watts is a teacher in the Greater Seattle Area, former youth minister and author of the book “Authentic Christianity: Why it matters for followers of Jesus”.

November 12, 2020 For the Healing of a Nation: Five Ways Forward After the Election
Browse Our Archives
Related posts from Politics Blue

For the Healing of a Nation: Five Ways...
“It was the best of times, it was the worst of times,...
view all Patheos Blue blogs