The Sacrifice of the Daughter: A Biblical Scholar in Alabama Responds to the Roy Moore Campaign

The Sacrifice of the Daughter: A Biblical Scholar in Alabama Responds to the Roy Moore Campaign December 18, 2017 Guest Contributor

I teach Biblical Studies at a small liberal arts college in Birmingham, Alabama. I am a white, middle-aged woman, Christian, married, politically liberal, and a feminist. I am the mother of two teen-aged daughters. I voted for Doug Jones and I ugly-cried tears of joy and relief when he won the U.S. Senate seat on December 12. You should know all these things before you read further; I am not pretending to talk about the Bible, or the white, Christian, evangelical, political machine that supports Roy Moore, from a place of neutrality. But I do want to talk about how this Senate race has permanently changed the way I think about a text I’ve taught for more than a decade in Alabama.

During this week’s election run-up and aftermath, I have been consumed by thoughts of Genesis 22, in which God tests Abraham by instructing him to sacrifice his son Isaac. I thought I knew this text well, but after this week, my understanding has been radically reframed. As the allegations of child molestation by Roy Moore hit the news, this election became more than a battle between Republicans and Democrats for a Senate seat. It became a battle for Alabama’s identity in the world.

In the midst of this political, cultural and religious contest, a 12-year-old girl, Millie March, came to Alabama on behalf of a pro-Trump super PAC to interview Roy Moore. The image was powerful. In the midst of allegations of child molestations, a little girl with pigtail braids in a pink jacket was chosen to shake hands with Roy Moore, be placed next to him, and talk with him about his political agenda and what is important to Alabama voters.

This image brought Genesis 22 into my Birmingham reality with what I can only describe as a physical force. In the Bible’s hauntingly spare narrative, Abraham silently acquiesces to God’s unthinkable demand, journeys with Isaac three days to Moriah, and lays him on the altar that Isaac has helped him to build. At the very last minute, an angel spares Isaac’s life by providing a ram as a surrogate for the sacrifice. Abraham does not kill his son.

As I recalled the eerie, skeletal quality of Genesis 22, and all its unanswered questions (Where is Isaac’s mother? What did Isaac and Abraham talk about on their three-day walk? How does Isaac make sense of this event later in life?), I found myself ruminating over the photo of Millie March and Roy Moore, and asking questions of this picture similar to those my students and I ask of the near-sacrifice of Isaac: What did the girl know? Did she know of the allegations of child molestation?  Where were her parents during this interview? What did they know and how did they think about this encounter? How will this encounter affect this child later in life?

We know that Republicans and Democrats exist in different realities in Alabama. Democrats are far more likely to believe the allegations of child molestation; Republicans discount the stories as “fake news.” I suspect Millie March’s parents simply do not believe the accusations against Moore.  So, for them, it is not as if they agreed to put their daughter in front of a child molester.  In fact, the interview seems designed to say exactly the opposite. These parents were so confident that the allegations of child molestation against Roy Moore were bunk that they were willing to put their daughter before Roy Moore to demonstrate their trust in him and also, presumably, in the world that Roy Moore would uphold if elected—the white supremacist, anti-feminist world in which fundamentalist Christianity dominates legal processes and cultural values.

I do not want to focus attention on Millie March or her parents. I am confident that many other families would have made the same decision this family did. My focus is on the symbolic nature of this encounter between a young girl and a culture that systemically sacrifices her on the altar of white patriarchy. My focus is on a set of cultural priorities that values white-supremacist, anti-feminist America over the bodies and lives of children, especially daughters, who so often live the negative effects of abuse of power. The symbolic willingness to use the body of a young girl as a demonstration of trust in an older, desperate, male politician—as an expression of political confidence and safety—places all of our daughters on the altar. Especially in light of the #MeToo movement, we must contend with the ways our blindness to white male patriarchal power has preserved and reinforced a world of harm for our daughters.

Though I have entertained with my students the idea that Sarah consented to Abraham taking Isaac to be sacrificed, I think I always resisted that idea on some level. I was always more comfortable with the idea that Sarah would have stood in the way, had she known. This election cycle in Alabama has made me confront that assumption. Perhaps Sarah was raging in the background, frantic to find her husband and son and stop this act. Maybe. But maybe she approved, saw this act as necessary to prove their faithfulness as a couple, as a people. Maybe she packed Abraham and Isaac a sandwich for the journey.  In either case, God refused the sacrifice. What started as a test of faith became a horrific scene in which both God and Abraham walk away scathed. God ultimately said no to the practice of using our children as an expression of our confidence in our own (or God’s) plans for the future. Even though Doug Jones won the election, we Alabamians have to deal with the aftermath of the sacrifice of our daughters on the altar. One daughter was placed there, but all of our daughters have been sacrificed.  We have to help our daughters and each other understand what that means.

October 26, 2017
A Letter to Millennials on the Power of Advocacy for Global Health: A Retrospective
Next Post 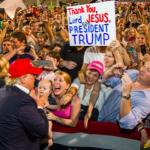 February 18, 2018 The Cult of Trump: Dangers of Charismatic Authority
Browse Our Archives
get the latest from
Politics Blue
Sign up for our newsletter
Related posts from Politics Blue