The Cult of Trump: Dangers of Charismatic Authority

By Thomas A. Forsthoefel

In the study of religion, many, but not all, scholars avoid using the word “cult”—a term orignally indicating veneration or worship but now hopelessly loaded, suffused with stereotypes, and marked by bias. Most scholars opt for the neutral phrase “new religious movement.” While admittedly fraught, the term cult is a useful shorthand: most people have at least a vague if imprecise sense of it. And, though I have just spent a semester trying to teach my students its naunces and complexities, for rhetorical purposes, I will say Trump’s authority model includes profoundly worrying dynamics that scholars identify in new religious movements. As I consider the cult of Trump, I find strikingly relevant insights in the 2008 study, “Comprehending Cults,” from Canadian sociologist Lorne L. Dawson.

“Cults,” or new religious movements, are complex but one feature that often emerges is a charismatic leader—a type of legitimate authority found in societies. Max Weber observed three modes of legitimate authority in social groups: “traditional,” such as patterns which may be found in indigenous cultures; “rational/legal,” where the authority is dependent on the legal structure, position or office and not on the person alone; and “charismatic,” which Weber felt originated in a leader’s exceptional qualities that inspire loyalty and obedience. The assumption here is that charisma is somehow intrinsic to the subject.

An alternate view, however, following the work of Dawson and many others, is that charisma is less an intrinsic attribute and more a quality attributed by others. This points to the profoundly social foundation of charismatic authority. In this view, charisma depends on its recognition by the group, which then confers and validates the authority of the charismatic leader. This goes beyond any popular notion of charisma based on mere attractiveness.

Charismatic authority, according to Dawson, need not always be correlated with any virtues, intelligence or competence. Instead, authority tends to be grounded in a personal connection with followers and built on faith and trust. In addition, says Dawson (drawing from Weber), charismatic leaders can be “romantic disrupters who abrogate and transcend social conventions”—non-institutional or even anti-institutional.

Sometimes, a charismatic leader will resist what Weber called “routinization”—a process of transmitting or delegating authority—in order to maintain power and control. They may seek constant reaffirmations of loyalty and brook no dissent or competition, leading to escalating demands for service or sacrifice; they may even demonize their enemies or isolate them. 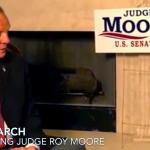 December 18, 2017
The Sacrifice of the Daughter: A Biblical Scholar in Alabama Responds to the Roy Moore Campaign
Next Post 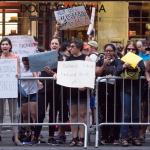 November 3, 2018 A Pep Talk for Everyday Resisters
Browse Our Archives
get the latest updates from
Politics Blue
and the Patheos
Patheos Blue
Channel
Related posts from Politics Blue 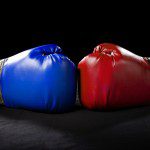