Trump in the Foxhole

Or, so I thought. Then I read a declaration by a fan of Donald J. Trump that the writer is casting his vote for the person he would most want to be in a foxhole with, and that person is none other than Trump. (Apparently this thought was first expressed by Jerry Falwell, Jr. shortly after he endorsed Trump.)

This has to be the most ridiculous thing I’ve read in years.

Trump should have done what thousands of other men his age did during the Vietnam Era – served his country – but he did not. From age 18 to 22, he received four separate deferments so he could study at Fordham University and the University of Pennsylvania.

Shortly after Trump’s 22nd birthday in 1968, he was classified as “1A,” available for unrestricted military service. Yet, when he reported for his military physical in September, he was declared medically disqualified. Records were destroyed after the draft ended in 1973, so there is no way of knowing why he was disqualified; perhaps it was having a rich father.

Whatever the defect, it apparently was not in place when the 6’2”, 180 pound Trump excelled at football and basketball as an 18 year old attending the New York Military Academy.

Why you’d want someone next to you in the foxhole that should have been next to other guys in one, but backed out, is beyond me.

Why you’d want someone next to you in the foxhole who is the most likely candidate to put your sons and daughters in a foxhole (but not his sons or daughter) is beyond me.

What is it about this election and Trump that has people voting based on their fears?

I won’t succumb to the fear. What about you? 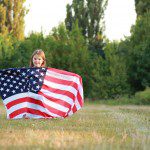 March 23, 2016 Standing by Her Man: Hillary's Choice
Browse Our Archives
get the latest updates from
Politics Blue
and the Patheos
Patheos Blue
Channel
Related posts from Politics Blue