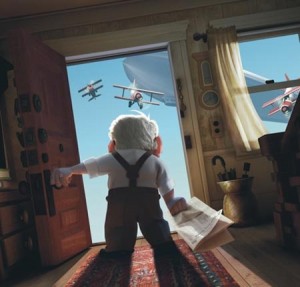 Without a doubt, Pixar is one of the most creative and successful animation studios in the history of film.  For over ten years, they have turned out almost annual successes that continually entertain, amaze, and inspire.  Along the way, they have encouraged audiences to look at the everyday, mundane objects in life in completely different ways.  With their latest release, Up, they encourage audiences to take a fresh look at life itself.

Up (directed by Pete Docter) opens with newsreel footage of Charles Muntz (Christopher Plummer), a famous explorer.  This footage inspires a young Carl Fredricksen (Edward Asner), a wanna-be explorer, to pursue his own life of adventure.  One day, he encounters a young explorer in her own right, Ellie.  These two adventurers spend the rest of their lives together dreaming of making it to their ultimate destination, Paradise Falls.  As it often happens, life gets in the way, continually interrupting their plans, and when Ellie passes away, Carl sinks into a life of disgruntled solitude.  Forced to leave his home because of urban development, Carl decides to make the long-awaited trip to Paradise Falls by lifting his house out of the city with countless colorful inflated balloons.  However, a young wilderness scout, Russell (Jordan Nagai), who was trapped under Carl’s house upon takeoff, spoils his plans of a life of peace and quiet. When Carl and Russel land just across the valley from Paradise Falls, they set out on a course to plant his house next to it.  Their journey is frequently interrupted by encounters with Charles, the seemingly ageless explorer still in search of a mythical bird.  Through their journey and adventures, Carl learns to open up to others and, in the process, learns something new about his life with Ellie. 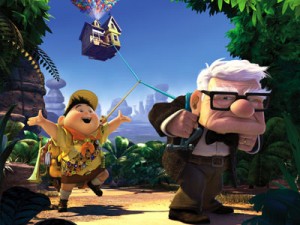 In my recent interview with religion and popular culture scholar Barry Taylor, he talks about the tendency of contemporary Christian films to lack any sense of mystery or magic.  In his recent book, Religion and Film:  Cinema and the Re-Creation of the World (review forthcoming), S. Brent Plate talks about the formal similarities between film and religion, particularly their engagement with and dependence on rituals and myths.  Through these, both film and religion re-create the worlds in which we live to a variety of ends that either help us make sense of the world in which we live or provide us with glimpses of how we should live in this world.  One could argue that Pixar’s success relies on these two closely-related observations as they revel in the mysterious and the magical, often operating on mythical levels as well.  They capture the painful aspects of human existence and relationships, even if they are acted out by toys or racecars, while simultaneously revealing the better parts of our nature that combat those shortcomings.

I find it extremely interesting that two of Pixar’s most recent films have delved so deeply into silence.  Think of the almost wordless first half of WALL-E (2008).  The height of Up‘s brilliance lies in the wordless montage that re-creates Ellie and Carl’s life together.  Here, Plate’s assertion that the techniques of film heighten its sense of myth and ritual, and that they should be taken more seriously for their impact on religion’s engagement with them, is most helpful.  In this montage, the filmmakers use lighting, music, and editing to draw us further into Ellie and Carl’s relationship.  They literally transport us to and guide us through their world together in a span of a few minutes.  Though this sets up the audience for a powerful emotional experience, it also makes us care more deeply about Carl throughout the rest of the film as well. 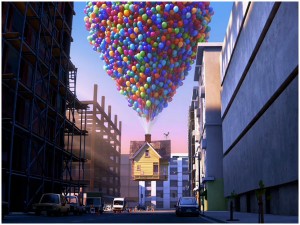 Theologian Friedrich Schleiermacher wrote (pardon the exclusive language), “If it is true that there are sudden conversions whereby in men, thinking of nothing less than of lifting themselves above the finite, in a moment, as by an immediate, inward illumination, the sense for the highest comes forth and surprises them by its splendour, I believe that more than anything else the sight of a great and sublime work of art can accomplish this miracle.”  This begins to get at Schleiermacher’s view of religion, the feeling of ultimate dependence on God and a recognition that the finite could mediate the infinite.  Over the past decade or so, Pixar’s films have, perhaps unwittingly, operated in that realm.  Like we can never look at toys, bugs, or a closet the same way after watching some of their films, we should not look at our everyday experiences with the ones we love as ordinary after viewing Up.  Rather, when lived to the fullest, these experiences can become extraordinary adventures themselves and, perhaps, gateways to the infinite.  Up, like most of Pixar’s films, transforms the finite into the infinite and takes us on a magical ride in the process.

Up (96 mins.) is rated PG and is currently in theaters everywhere.