The Hound of Heaven 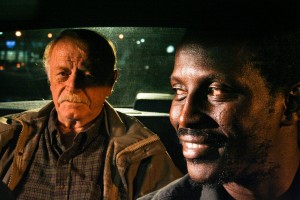 As the days and weeks approach, we’ll start to hear more and more about the “best movie(s) of the year.”  To hear about one of these, and one of the year’s best performances, you’ll most likely have to tune into the Independent Spirit Awards.  Goodbye Solo, should have been nominated for Best Feature at the Independent Spirit Awards but seems to have been crowded out by more mainstream indies (Precious and (500) Days of Summer).  Thankfully, its lead actor, Souleymane sy Savane, is up for a much-deserved Best Actor award.

Goodbye Solo tells the story of Solo (Souleymane sy Savane), a Senegalese immigrant cab driver in Winston-Salem, North Carolina, who befriends an elderly white male passenger, William (Red West).  He quickly surmises, after William presents him with a financial deal that seems too good to be true (drive him to Blowing Rock without a return trip for $1,000), that William means to commit suicide.  He has already set about closing out all his affairs.  However, Solo will not have it and tries his hardest in the time remaining to befriend William and show him new reasons to go on living despite the lack of family and friends that seem to plague him.

Like few other characters in film…ever…Solo embodies Francis Thompson’s notion of God’s grace in his poem “The Hound of Heaven.”  By that, Thompson meant that God refuses to give up on humanity, eternally pursuing, in love, anyone who flees God.  Solo, too, refuses to give up and stop living William, no matter how hateful he becomes.  Not once does Solo resort to any particular theology or divine plea for why William should go on living, trusting instead in their potential relationship.  This brings to mind a recent quote I read in a book (about video games and religion of all things) which said that, “After a while, the doctrine started to sound like noise and the relationships sounded like music.”  This is epitomized in the character of Solo whose joyous, infectious grasp on life and genuine desire for relationship is music for the soul indeed.  Secondly, as Solo studies to become a flight attendant, he reads in his textbook in the section of what to do in the case of a medical emergency, that a flight attendant’s job is not to diagnose illness but to preserve life.  The parallels with his relationship with William are clear.  Not once does Solo try to “diagnose” William’s condition, although he does pry once without William’s knowledge, but commits himself to honoring and preserving the life that remains for him.

The film’s conclusion, which I will not disclose here, embraces a level of complexity rare in more mainstream films.  It might even challenge all the praise that I have heaped on Solo thus far, or it might further confirm it.  It is certainly open for discussion.  The film benefits from marvelous acting, both sy Savane and West are on level footing here and prove, if a seemingly unlikely pair at first, a perfect match.  Rahim Bahrani‘s direction is nearly flawless, and Winston-Salem makes an unassuming…or should I say unobtrusive…background for an engrossing story.  As I look back over films released this last year, I can recommend few as enthusiastically as Goodbye Solo.

Goodbye Solo (91 mins) is rated R for language (although I found nothing “R-ish” about it) and is available on DVD and streaming on Netflix.