I Get My Kicks Finding Bricks 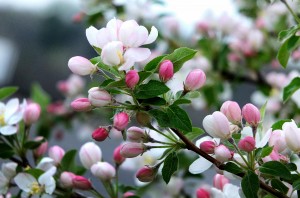 I needed bricks for the Marian rose garden, and for a bird bath feature. I didn’t need a skid and to buy them each, new, well that seemed a bit expensive and silly. What with all the buildings being torn down in town I thought I could find some used, but no such luck there either. A friend’s sister owns a brick business, but she too wanted a buck-a-brick, or there about.

After nearly a month I gave up the hunt, decided instead to buy a couple bags of cement and, having colorant and steppingstone kits in the basement, would make my own. The bricks wouldn’t look as rustic and artsy, though the cost would be pennies a piece. The project would take until mid-summer to complete. I had hoped to finish the Marian garden by Mother’s Day.

Mornings are reserved for scripture, the Divine Office, and intercessory prayers and rosary. I’d finished my two cups of coffee with Christ and as I blew out the candle, looked to the Divine Mercy image and half-heartedly asked “Can you send me some bricks please? They’re for your mom.”

And I heard (well not physically heard, but you know…knew) the words, “Go dig.”

I made my breakfast and headed to the back porch. It was mid morning and the birds were singing a congregational worship in the old apple tree. A lot of birds. Twenty some years ago, when I first moved into this house, I removed a stationary glider from under its limbs because of them.

While eating breakfast I looked to the back of the yard. The two-tier wall of bricks behind the shed supported the Annabel hydrangeas. I thought of pulling down one tier for the new garden, and knew that that really wasn’t an option.

I took my dishes to the kitchen. From behind the door picked up the shed key and headed outside to do a bit more work in the future garden. Putting the gloves, basket, and spade into the wagon I planned to plant a rose bush or two.

There, again those words. I answered back, “I AM going to dig!”

I took a deep breath and stared at the stand of fiddle head ferns breaking ground under the apple tree. The birds were still boisterously rejoicing in the morning light.

Seriously…buried just below the surface, this is what I found: 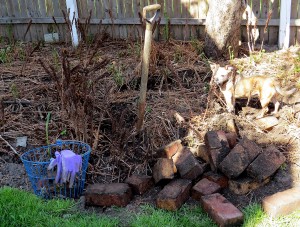 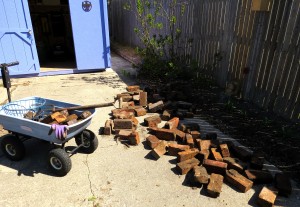 The soil was soft from the rains and the ferns had grown under and between the bricks so they were easily plucked like potatoes. I haven’t counted yet but I think there will be enough. 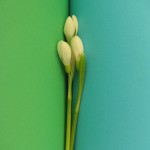 May 7, 2015
For Strength When Ridiculed, Prayer for Priests
Next Post 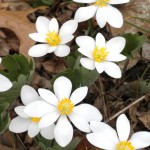 May 12, 2015 For Growing in Holiness, Prayers for Sisters and Nuns
Recent Comments
0 | Leave a Comment
Browse Our Archives
get the latest from
Morning Rose Prayer Gardens
Sign up for our newsletter
POPULAR AT PATHEOS Catholic
1