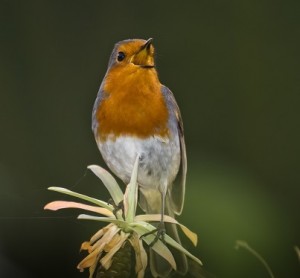 “Now ask the beasts to teach you, and the birds of the air to tell you; Or the reptiles on earth to instruct you, and the fish of the sea to inform you. Which of all these does not know that the hand of God has done this? In his hand is the soul of every living thing, and the life breath of all mankind.” Job 12: 7-10

Yesterday was a big day for us gardeners and, well, all naturalists, when Pope Francis instituted within the Church September 1 as the World Day of Prayer for the Care of Creation.

Vatican Radio reported the event, in which Pope Francis noted that,

…the initiative follows in the footsteps of the Orthodox Church which, for the past 25 years, has dedicated September 1st, the beginning of a new year in the Orthodox liturgical calendar, to care for the environment. Since that time, the World Council of Churches has also marked a month-long ‘Time for Creation’ stretching from September 1st to the feast of St Francis of Assisi on October 4th.

In the spirit of this time for creation I will weekly until October 4 share with you a few gardening saints who knew the value of nature.

The term Culdee, Servant of God, refers to St. Óengus’ love of solitude. Célé Dé or Céili Dé (Culdee) was a name given to the hermits of that time; Céili Dé means the intimates or companions of God. There is considerable conflicting information (each source indicating of course that it is the most accurate) whether he became a lay brother of the Culdees, if the order developed because of him or if this was a general term for monks in solitude.[1] In any case, this order of monks took a more austere form of fasting, penance, and prayer. He eventually became a bishop in Ireland.

As a young man St. Óengus is said to have conversed with angels who enhanced his love of prayer and solitude. During that time he researched and wrote extensively about the saints and later wrote his own Féilire or Festilogium, a calendar of saints that became one of the sources of information for the early Irish saints. He found nature supplied him with a good deal of insight about those holy men and women:

The birds…sang to him songs of the saints; the green grass of the Emerald Isle told him of their hopefulness; the white daisy blossoms of their purity; the red roses of their martyrdom. The mighty oak trees spoke of their strength; all nature seemed to him to be singing the praises of the saints. He, thinking upon the saints so much encouraged others to take the sweetness of these holy lives and make it their own, even as the bee gathers honey from the flower.[2]

This beloved saint in all humility hid the fact for years that he was highly educated, choosing manual labor. He pursued the practice of deep durational prayer, more easily admired than imitated.

When St. Óengus entered the monastery he labored in the cellarer’s gardens. The cellarer was one of the leading monastic officials in charge of maintaining provisions, responsible for feeding the entire monastic community. This including lay-workers and peasants in need, as well as a steady stream of guests who visited the monastery on a journey or pilgrimage. And royalty guests could include a large retinue! The cellarer’s provisioning included a supply of vegetables and fruit, dairy, fowl and fish, medicinal plants and utilitarian herbs including hay and flax, as well as bees for candle wax and honey. There were many types of cellarer’s gardens with the main one being the kitchen garden or, in French, the le jardin potager.

While working the many provisional gardens St. Óengus usually had birds perching on his shoulders and singing to him as he worked. These birds and especially the robins were his constant companions. One day he severely cut his hand while chopping wood and the robins were so distressed they flew near to his hand frantically beating their wings and “…uttered loud cries because their friend was hurt.”

The Robin of Ireland, Erithacus rubecula, often called a Ploughman’s Bird or Spideog, is a small little bird of only about three inches. It is mostly gray with a portion of its face and breast being red, and the remaining underside mottled white. It is a friendly bird rarely disturbed by the hubbub of people and often trails behind gardeners looking for freshly unearthed worms…and now you know why its so named, the Ploughman’s Bird.

For more gardening saints, my book, A Catholic Gardener’s Spiritual Almanac, has them listed by month!

[1] My bias is that of St. Óengus being a hermit in service to God and that the term culdee simply indicated that solitary activity; see the 1868 writings about the life of this saint by Rev. John O’Hanlon. 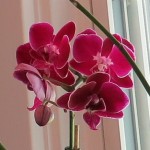 September 1, 2015
Hinderance in Doubt, Tuesday's Prayer for Sisters and Nuns
Next Post 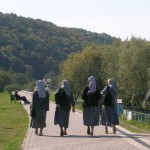 September 8, 2015 Signs and Symbols of Faith, Prayers for Sisters and Nuns
Recent Comments
0 | Leave a Comment
Browse Our Archives
get the latest updates from
Morning Rose Prayer Gardens
and the Patheos
Catholic
Channel
POPULAR AT PATHEOS Catholic
1

What You're Doing When You Vaccine-Shame...
Sticking the Corners
Related posts from Morning Rose Prayer Gardens