St. Rita of Casacia and the Lovely Lebanon Statue 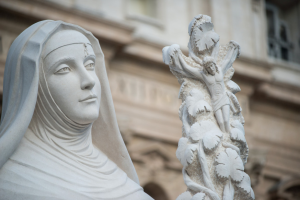 My excitement cannot be contained at the new sculpture of St. Rita of Cascia, the patron of desperate causes. Though she is not my patron saint, she is well loved.

The article at Aleteia, written by Sub-Deacon Antoine Antoun, Beirut, shares the story behind its origin. He notes…

How appropriate that this was done by someone from Lebanon, and from the rocks of Lebanon, specifically from Tartej. From these rocks, Nayef Alwan, who is from Aitou al-Zgharta in Lebanon, sculpted the statue of Saint Rita. This statue will be erected at the birthplace of Saint Rita—at the entrance of the town of Cascia, Italy…

…that Christians are a foundation of Lebanon and the region and will remain in it, because nothing shakes their resolve, whatever the sacrifices and suffering…. Despite the problems that beset Lebanon this … is a sanctuary to the saint so long as she is known as the patron saint of impossible causes. Perhaps she will intercede for Lebanon and the Lebanese people after their own solutions become impossible!

Below is a small piece of St. Rita’s story, an excerpt from my book A Catholic Gardener’s Spiritual Almanac, Ave Maria Press. St. Rita , also known as Margarita of Cascia, lived 1381-1457, was born Italy, passing into eternal life on May 22, her memorial date in our church calendar. She has several patronages, the first being the Patron of Desperate Causes, she also has a special miraculous association with bees that began as an infant.

In the parish church of Laarne, near Ghent, Belgium, there is a statue of St. Rita in which several bees are featured. This depiction originates from the story of albino bees, a unique gift from God, which drew near St. Rita as an infant and reappeared after her death.

On the day after her baptism, her family noticed a swarm of bees flying around her as she slept. The bees were unusual because they were white in color, and they peacefully entered and exited the baby’s mouth without causing her any harm. Instead of being alarmed for her safety, her family was mystified by this sight. It is said that one of the farmers witnessing the event, whose arm had been deeply cut by a scythe, passed the injured arm over the child to shoo the bees away and his arm was miraculously healed.

Nearly two hundred years after her death, at the monastery St. Mary Magdalene of Cascia, where St. Rita had lived, the white bees appeared again. Then, as now, they come out of the wall during Holy Week—which we as Christians know varies from year to year—and remain about the gardens until St. Rita’s feast day of May 22, when they return for their mystical hibernation until the next year. During more recent centuries the bees are no longer white, appearing as any other bee of yellow but without a stinger.

There is another miraculous story of this saint set near the end of her life. When St. Rita was bedridden at her convent a cousin visited her and asked the saint if she desired anything from her old home in Rocca Porrena, Italy. St. Rita responded by asking for a rose and a fig from the garden. It was January and her cousin did not expect to find anything at the gardens due to the snowy weather. However, when she went to the homestead, a single blooming rose was found in the garden as well as a fully-ripened and edible fig. Her cousin brought the rose and fig back to St. Rita at the convent. Legend has it that this rose bush is still alive today and often in bloom.

St. Rita’s tomb with her incorrupt body is at the Basilica of Cascia in Italy. 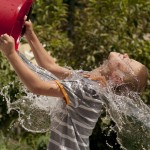 Review of 2021 Remix of The...
Biblical Evidence for Catholicism
Related posts from Morning Rose Prayer Gardens