Passover: God Kills A Bunch Of Babies, Except The Jewish Ones

Passover: God Kills A Bunch Of Babies, Except The Jewish Ones April 10, 2017 Michael Stone

Passover: The celebration of the mass murder of children by an immoral and incompetent God who needed to be reminded which children not to kill.

Passover is a sick and twisted holiday where the supposed slaughter of innocent Egyptian children is celebrated, because for some reason an all-powerful, all-knowing God could not free the Israelites from their fictional captivity in Egypt without killing every first born, non-Jewish child in Egypt.

Ostensibly a celebration and commemoration of the supposed liberation of the Israelites from slavery in ancient Egypt, Passover is in reality an ugly reminder that religion poisons everything.

In Hebrew, Passover is known as Pesach (which means “to pass over”), because God passed over the Jewish homes when killing the Egyptian first born on the very first Passover eve.

ABC explains the story of Passover:

Judaism teaches that the Jews were living as slaves in Egypt, forced into heavy labor and poor living conditions. God heard their cries and sent Moses to free the people from the Pharaoh’s rule. Moses asked Pharaoh to “Let my people go.”

When Pharaoh refused, God unleashed a series of 10 plagues upon Egypt. Moses asked Pharaoh for the Jews’ freedom after each of the plagues. When Pharaoh rejected Moses’ requests, a new plague struck Egypt. After the last plague, the killing of the first born sons of Egyptians, Pharaoh relented and the Jews were set free. The first born sons of Jewish people were spared, or “passed over,” which gives the holiday its namesake.

In other words, a cruel and unimaginative God kills all the first born children in Egypt, except the Jewish ones. 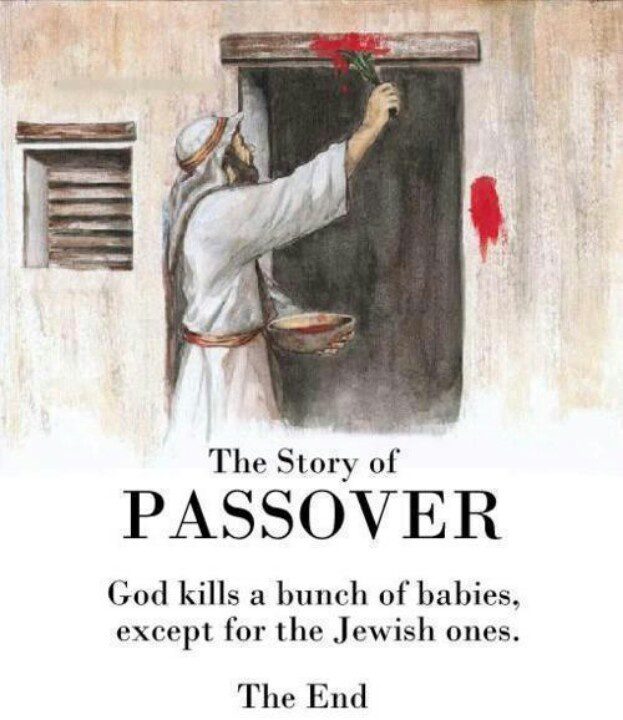 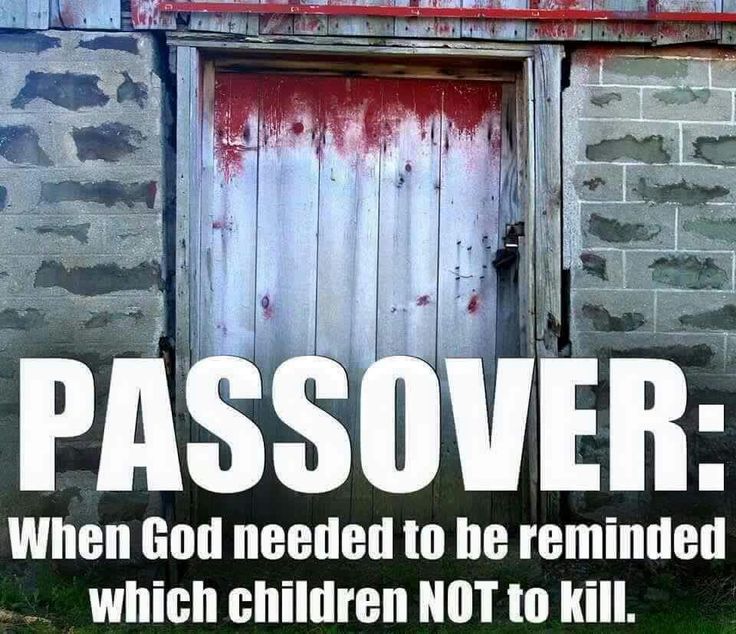 Adding insult to injury, this imaginary God is so incompetent that he needs to be reminded which children He is not supposed to kill, and so the Israelites must mark their homes with lamb’s blood so God won’t be confused about which innocent children to kill.

God instructs the Israelites to mark their houses with lamb’s blood in chapter 12 of Exodus:

And the blood shall be to you for a token upon the houses where ye are: and when I see the blood, I will pass over you, and the plague shall not be upon you to destroy you, when I smite the land of Egypt. (Exodus 12:13)

“… and there was loud wailing in Egypt, for there was not a house without someone dead.”

The only redeeming feature of the whole ugly mess is that God does not exist, and that the story of Exodus, like most of the Bible, both Old and New Testament, is nothing but the irrational fever dream of ignorant and superstitious men.

Bottom line: Passover is the perverse celebration of an immoral and incompetent God killing innocent children.