Won’t somebody please think of the children? Christian hate group One Million Moms is very angry about a television ad featuring a vagina singing the praises of a yeast infection treatment.

The conservative Christian activist group One Million Moms recently called for a boycott of FemiClear, after the company released an ad featuring a singing vagina. The Christian group of conservative moms are sending the following message to FemiClear:

I am disgusted by the “joie de hooha” ad that FemiClear is currently airing. Your repulsive ad is irresponsible, especially to air during prime time when children are likely watching. We all know children repeat what they hear. I urge you to pull this controversial commercial immediately.

Explaining the boycott and petition, One Million Moms explains:

The newest FemiClear commercial shows a woman and her friend at yoga class. While the women are posing in various yoga positions, singing is suddenly heard, and it is implied that the repeated “la,la,la,la,la,la” is coming from the private parts of the woman who used FemiClear to treat her recent yeast infection. The camera zooms in for close-up shots of her crotch to confirm that the singing is definitely coming from between her legs.

Between her legs? How scandalous!

Watch the ad from FermiClear below –

The voiceover claims FemiClear is better than Monistat, since it is all natural and organic. And if this ad isn’t tacky enough, the lady, with her legs spread apart, then tells her friend, “So instead of chemicals, my hooha is full of joy.” The commercial ends with the tagline “Joie de hooha” displayed on the screen and heard. (Joie de literally means “joy of. …”) The commercial and tagline are posted on the FemiClear website too.

This vile commercial is airing during prime time when children are likely watching television. When this type of commercial airs too early in the evening, family viewing time is ruined. Can you imagine what goes through the mind of a child when he sees this ad?

Won’t somebody please think of the children?

Bottom line: Christian hate group One Million Moms is “disgusted” by a television ad from FemiClear featuring a vagina singing the praises of a yeast infection treatment. 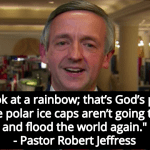