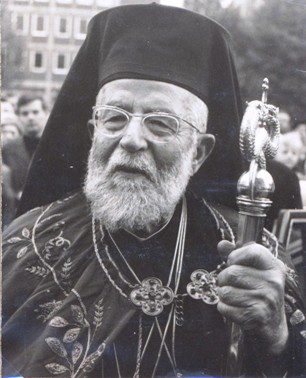 “True socialism is Christianity integrally lived in the just sharing
of goods and the fundamental equality of all.”*

His Eminent Beatitude Maximos IV Sadegh,
Cardinal Patriarch (Melkite Greek) of Antioch,
at the fourth session of the Second Vatican Council in 1965,
113 characters [Tweet this]

After having refused it several times for reasons related to ecclesiology, Maximos IV finally accepted the title of Cardinal in 1965. The quote above comes from an intervention given on September 27, 1965. Before providing the quote in a larger context, which deals with atheism, Marxism, communism, and socialism, I’ll add the same quote above is included in the Message of Some Bishops from the Third World organized by Dom Helder Camara in 1967. Excerpts from the Patriarch’s powerful intervention follows.

We all know from experience that many of those who call themselves atheists are not really opposed to the Church. There are among them those who are very close. In reality, as Paul VI says, they seek a truer presentation of God, a religion harmonizing with the historical evolution of humanity, and above all a Church supporting not only the poor but also the effort for solidarity with the poor. They are often scandalized by a mediocre and self-centered Christianity, entangled with money and false riches, defending, even with arms, not its faith, which can never be defended by force, but its interests and its short-term security.

Certain persons have claimed that the schema denounces the sins of the world. But here is the great, the enormous sin of the world, which Jesus denounced ceaselessly in his Gospel, namely selfishness and the exploitation of man by man.

Certain persons would wish that this text speak to a greater extent of the necessity of carrying one’s cross, of enduring one’s lot with resignation. But, who do in fact carry the cross more than the laboring and miserable masses who try to emerge from their misery by work, solidarity, indeed even by socialism?
It is only regrettable that they do so in atheistic systems. But, isn’t it the selfishness of certain Christians that has provoked and still provokes, to a large extent, the atheism of the masses?

Jesus puts us on guard against scandalizing the little ones, that is to say the humble ones: “Woe to the man through whom scandal comes!” Jesus said that at the conclusion of the parable of the rich man and poor Lazarus. Many of these atheists are simply like Lazarus, scandalized by the rich who call themselves Christians.

Let us then have the courage to “lead back” to their true sources, which are Christian, these moral values of solidarity, fraternity, and social unity. Let us show that true socialism is Christianity integrally lived in the just sharing of goods and the fundamental equality of all.

Catholic Social Teaching (CST) in 140 Characters or Less is an attempt to provide short bits from within our Catholic moral and social tradition to an audience subject to the tendencies of consumerism and immediate gratification. When possible, and please remind me if I forget, I will include a fuller portion of the quote provided for additional context, and may add a line or two of comment.

Certainly, we can learn much from short statements, but we must see things from within the whole of our faith tradition. This reminds me of what Henri de Lubac wrote in The Discovery of God, concerning Saint Augustine’s dilige et quod vis fac, that this exhortation is proper and may be embraced without error “if you love enough to act, in every circumstance, according to the dictates of love.” De Lubac continues, “One might also say ‘love and believe what you will’ – if you know how to extract all the light from love, whose source is not in you.” Therefore, start with and share small pieces if you prefer, but orient yourself towards learning the whole.

Read what different teachers of the faith have had to say on the Gospel’s demand for justice. See what/who inspired the Catholic Worker Movement, read the Compendium of the Social Doctrine of the Church, read whole documents and the many writers who contributed to this treasure.

For every CST in 140 Characters or Less post, I’ll have a Tweet button available for you to click if you want to share a Tweetable version of the post’s quote. Give it a try!

April 13, 2017 Hunger Strike at ICE Northwest Detention Center Reaches Fourth Day
Recent Comments
0 | Leave a Comment
Browse Our Archives
get the latest from
Catholic
Sign up for our newsletter
POPULAR AT PATHEOS Catholic
1