Did Francis Blame the West and Capitalism for Terrorism and Violence?

Did Francis Blame the West and Capitalism for Terrorism and Violence? August 1, 2016 Keith Michael Estrada

With the full text of Pope Francis’s in-flight interview published, I thought I’d share something interesting. Returning home from Poland upon the conclusion of World Youth Day, the Pope was asked a question on terrorism and his initiative for counteracting it.

The reporter asked: Your concrete initiatives to counteract terrorism, violence?

Pope Francis answered: Terrorism is everywhere. You think of the tribal terrorism of some African countries. It is terrorism and also . . . But I don’t know if I [should] say it because it is a little dangerous… Terrorism grows when there are no other options, and when the center of the global economy is the god of money and not the person — men and women — this is already the first terrorism! You have cast out the wonder of creation — man and woman — and you have put money in its place. This is a basic terrorism against all of humanity! Think about it! (Emphasis my own.)

Our friend at Cosmos the in Lost mentioned this in his post, “Girard: Islamic Extremism is Symmetrically Related to Western Wealth“. Check it out.

Wealth, the desire for more wealth, the resulting expansion and oppression: capitalism’s rotten fruit of greed and injustice, death, social breakdown and a-theism, terrorism and violence. Maybe that’s something we can put a “Made in the USA” label on. 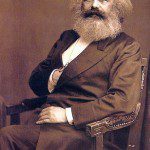 September 6, 2016 When Marx cited Luther to Slam Capitalism - but Catholics did it First
Recent Comments
0 | Leave a Comment
Browse Our Archives
get the latest from
Catholic
Sign up for our newsletter
POPULAR AT PATHEOS Catholic
1