I. Some challenges of today’s world

52. In our time humanity is experiencing a turning-point in its history, as we can see from the advances being made in so many fields. We can only praise the steps being taken to improve people’s welfare in areas such as health care, education and communications. At the same time we have to remember that the majority of our contemporaries are barely living from day to day, with dire consequences. A number of diseases are spreading. The hearts of many people are gripped by fear and desperation, even in the so-called rich countries. The joy of living frequently fades, lack of respect for others and violence are on the rise, and inequality is increasingly evident. It is a struggle to live and, often, to live with precious little dignity. This epochal change has been set in motion by the enormous qualitative, quantitative, rapid and cumulative advances occurring in the sciences and in technology, and by their instant application in different areas of nature and of life. We are in an age of knowledge and information, which has led to new and often anonymous kinds of power.

No to an economy of exclusion

53. Just as the commandment “Thou shalt not kill” sets a clear limit in order to safeguard the value of human life, today we also have to say “thou shalt not” to an economy of exclusion and inequality. Such an economy kills. How can it be that it is not a news item when an elderly homeless person dies of exposure, but it is news when the stock market loses two points? This is a case of exclusion. Can we continue to stand by when food is thrown away while people are starving? This is a case of inequality. Today everything comes under the laws of competition and the survival of the fittest, where the powerful feed upon the powerless. As a consequence, masses of people find themselves excluded and marginalized: without work, without possibilities, without any means of escape.

Human beings are themselves considered consumer goods to be used and then discarded. We have created a “throw away” culture which is now spreading. It is no longer simply about exploitation and oppression, but something new. Exclusion ultimately has to do with what it means to be a part of the society in which we live; those excluded are no longer society’s underside or its fringes or its disenfranchised – they are no longer even a part of it. The excluded are not the “exploited” but the outcast, the “leftovers”.

54. In this context, some people continue to defend trickle-down theories which assume that economic growth, encouraged by a free market, will inevitably succeed in bringing about greater justice and inclusiveness in the world. This opinion, which has never been confirmed by the facts, expresses a crude and naïve trust in the goodness of those wielding economic power and in the sacralized workings of the prevailing economic system. Meanwhile, the excluded are still waiting. To sustain a lifestyle which excludes others, or to sustain enthusiasm for that selfish ideal, a globalization of indifference has developed. Almost without being aware of it, we end up being incapable of feeling compassion at the outcry of the poor, weeping for other people’s pain, and feeling a need to help them, as though all this were someone else’s responsibility and not our own. The culture of prosperity deadens us; we are thrilled if the market offers us something new to purchase. In the meantime all those lives stunted for lack of opportunity seem a mere spectacle; they fail to move us.

No to the new idolatry of money

55. One cause of this situation is found in our relationship with money, since we calmly accept its dominion over ourselves and our societies. The current financial crisis can make us overlook the fact that it originated in a profound human crisis: the denial of the primacy of the human person! We have created new idols. The worship of the ancient golden calf (cf. Ex 32:1-35) has returned in a new and ruthless guise in the idolatry of money and the dictatorship of an impersonal economy lacking a truly human purpose. The worldwide crisis affecting finance and the economy lays bare their imbalances and, above all, their lack of real concern for human beings; man is reduced to one of his needs alone: consumption. 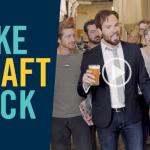