Check out these 11 times Saint John Paul II produced some solid teachings on the right to life! Use some of these to scrutinize the positions of your political candidates:

1. The State must ensure to all its members the possibility of a full development of their person. This requires that those who are in conditions of necessity and need owing to illness, poverty, disablements of various kinds, should be offered those services and those aids which their particular situation calls for. Even before being an obligation of justice on the part of the State, this is an obligation of solidarity on the part of each citizen. – John Paul II, 25 November 1978

2. Would that these words, written at a time when what has been called “unbridled capitalism” was pressing forward, should not have to be repeated today with the same severity. Unfortunately, even today one finds instances of contracts between employers and employees which lack reference to the most elementary justice regarding the employment of children or women, working hours, the hygienic condition of the work-place and fair pay; and this is the case despite the International Declarations and Conventions on the subject and the internal laws of States. [Pope Leo XIII] attributed to the “public authority” the “strict duty” of providing properly for the welfare of the workers, because a failure to do so violates justice; indeed, he did not hesitate to speak of “distributive justice”. – John Paul II, 1 May 1991

3. The Church’s love for the poor, which is essential for her and a part of her constant tradition, impels her to give attention to a world in which poverty is threatening to assume massive proportions in spite of technological and economic progress. In the countries of the West, different forms of poverty are being experienced by groups which live on the margins of society, by the elderly and the sick, by the victims of consumerism, and even more immediately by so many refugees and migrants. In the developing countries, tragic crises loom on the horizon unless internationally coordinated measures are taken before it is too late. – John Paul II, 1 May 1991

4. Some threats come from nature itself, but they are made worse by the culpable indifference and negligence of those who could in some cases remedy them. Others are the result of situations of violence, hatred and conflicting interests, which lead people to attack others through murder, war, slaughter and genocide. And how can we fail to consider the violence against life done to millions of human beings, especially children, who are forced into poverty, malnutrition and hunger because of an unjust distribution of resources between peoples and between social classes? And what of the violence inherent not only in wars as such but in the scandalous arms trade, which spawns the many armed conflicts which stain our world with blood? What of the spreading of death caused by reckless tampering with the world’s ecological balance, by the criminal spread of drugs, or by the promotion of certain kinds of sexual activity which, besides being morally unacceptable, also involve grave risks to life? It is impossible to catalogue completely the vast array of threats to human life, so many are the forms, whether explicit or hidden, in which they appear today! – John Paul II, Evangelium Vitae, 25 March 1995.

5. In the search for a solution to the problem of migration in general and illegal migrants in particular, the attitude of the host society has an important role to play. In this perspective, it is very important that public opinion be properly informed about the true situation in the migrants’ country of origin, about the tragedies involving them and the possible risks of returning. The poverty and misfortune with which immigrants are stricken are yet another reason for coming generously to their aid. It is necessary to guard against the rise of new forms of racism or xenophobic behaviour, which attempt to make these brothers and sisters of ours scapegoats for what may be difficult local situations. – John Paul II, 25 July 1995.

6. For the same reason, [the Church] also opposes the claims of capitalism, proclaiming “the principle of the priority of labour over capital”, since human labour “is always a primary efficient cause, while capital, the whole collection of means of production, remains a mere instrument or instrumental cause” of the process of production. – John Paul II, 19 March 1997.

7. Thus, the emergence and development of priestly vocations among boys, adolescents and young men are continually under pressure and facing obstacles. The lure of the so – called “consumer society” is so strong among young people that they become totally dominated and imprisoned by an individualistic, materialistic and hedonistic interpretation of human existence. Material “well – being,” which is so intensely sought after, becomes the one ideal to be striven for in life, a well – being which is to be attained in any way and at any price. There is a refusal of anything that speaks of sacrifice and a rejection of any effort to look for and to practice spiritual and religious values. The all – determining “concern” for having supplants the primacy of being, and consequently personal and interpersonal values are interpreted and lived not according to the logic of giving and generosity but according to the logic of selfish possession and the exploitation of others… In this context special mention should be made of the breakup of the family and an obscuring or distorting of the true meaning of human sexuality. That phenomena have a very negative effect on the education of young people and on their openness to any kind of religious vocation. Furthermore, one should mention the worsening of social injustices and the concentration of wealth in the hands of a few, the fruit of an inhuman capitalism which increasingly widens the gap between affluent and indigent peoples. In this way tension and unrest are introduced into everyday life, deeply disturbing the lives of people and of whole communities.- John Paul II, 25 March 1992.

8. Not infrequently, this leads some public institutions to ignore the actual social climate. More and more, in many countries of America, a system known as “neoliberalism” prevails; based on a purely economic conception of man, this system considers profit and the law of the market as its only parameters, to the detriment of the dignity of and the respect due to individuals and peoples. At times this system has become the ideological justification for certain attitudes and behavior in the social and political spheres leading to the neglect of the weaker members of society. Indeed, the poor are becoming ever more numerous, victims of specific policies and structures which are often unjust. – John Paul II, 22 January 1999.

9. Forms of extreme poverty and injustice are the source of violence and contribute to maintaining and developing many local or regional conflicts. I think particularly of the countries in which famine takes place so regularly. The international community is called to do all it can for the gradual elimination of these scourges, mainly by providing the material and human means that will help the peoples who have the greatest need. Greater support for the organization of the local economies would certainly empower the indigenous peoples to gain greater control of their future. – John Paul II, 13 December 2002.

10. The People of God should also make approaches to the public authorities, in order that the latter may resist these tendencies which divide society and are harmful to the dignity, security and welfare of the citizens as individuals, and they must try to ensure that public opinion is not led to undervalue the institutional importance of marriage and the family. And since in many regions young people are unable to get married properly because of extreme poverty deriving from unjust or inadequate social and economic structures, society and the public authorities should favor legitimate marriage by means of a series of social and political actions which will guarantee a family wage, by issuing directives ensuring housing fitting for family life and by creating opportunities for work and life. – John Paul II, 22 November 1981.

11. Thus, part of the teaching and most ancient practice of the Church is her conviction that she is obliged by her vocation – she herself, her ministers and each of her members – to relieve the misery of the suffering, both far and near, not only out of her “abundance” but also out of her “necessities.” Faced by cases of need, one cannot ignore them in favor of superfluous church ornaments and costly furnishings for divine worship; on the contrary it could be obligatory to sell these goods in order to provide food, drink, clothing and shelter for those who lack these things. As has been already noted, here we are shown a “hierarchy of values” – in the framework of the right to property – between”having” and “being,” especially when the “having” of a few can be to the detriment of the “being” of many others. – John Paul II, 30 December 1987.

Clearly, that “Embraced” should have been “Embarrassed”. Of course the Catholic Church isn’t an arm of the Republican Party. 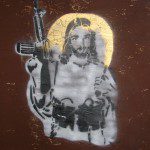 December 4, 2015
#prayershaming: Bridging the gap between profession and action
Next Post 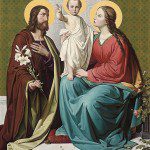 December 5, 2015 Gun Violence and the Religious Nones: If Family is the Remedy, What Assaults the Family?
Recent Comments
0 | Leave a Comment
Browse Our Archives
get the latest from
Catholic
Sign up for our newsletter
POPULAR AT PATHEOS Catholic
1

How To Pray When We Don't...
The Way of the Wildflowers
Related posts from Proper Nomenclature