Since yesterday several outlets have reported that President Obama may soon be taking executive action on gun sales.

President Barack Obama is expected to announce in the coming days a new executive action with the goal of expanding background checks on gun sales, people familiar with White House planning said.

Described as “imminent,” the set of executive actions would fulfill a promise by the President to take further unilateral steps the White House says could help curb gun deaths.

Plans for the action are not yet complete, and those familiar with the process warn that unforeseen circumstances could delay an announcement. But gun control advocates are expecting the new actions to be revealed next week, ahead of Obama’s annual State of the Union address, set for January 12.

Gun control efforts have halted at federal and state levels. Republicans overwhelmingly oppose stricter gun control measures and those in Congress have succeeded in blocking most proposed legislation on the matter.

Congress did manage to renew a ban on most plastic firearms in 2013.

On the other hand, the GOP recently rejected a proposal that would “bar individuals on terror watch lists from purchasing firearms.”

Guns aren’t the problem, but the people with mental disorders wielding these weapons are the problem, we’ve heard.

Will the GOP do nothing? Will they only encourage further possession of firearms?

What does the GOP voting Catholic have to consider when faced with this reality?

The U.S. Catholic Bishops^ have spoken on guns more than a few times.

Let’s remember Bishop Blaire’s April 2013 letter (on behalf of the U.S. Catholic Bishops) to U.S. Senators on the proposed S. 649*.

The provisions contained within S. 649 are a positive step in the right direction. We hope that this bill will provide Congress a foundation to continue to address the issue of gun violence in society.

As you consider S. 649, we ask you to support policies that:

Bishop Blaire quoted from the U.S. Bishops’ 2000 pastoral statement, Responsibility, Rehabilitation, and Restoration: A Catholic Perspective on Crime and Criminal Justice – from it, Bishop Blaire added:

We support measures that control the sale and use of firearms and make them safer (especially efforts that prevent their unsupervised use by children or anyone other than the owner), and we reiterate our call for sensible regulation of handguns.

However, we believe that in the long run and with few exceptions (i.e., police officers, military use), handguns should be eliminated from our society. “Furthermore, the widespread use of handguns and automatic weapons in connection with drug commerce reinforces our repeated ‘call for effective and courageous action to control handguns, leading to their eventual elimination from our society.'” [Tweet this]

My friends, we need to protect human lives – our gun culture, our gun fetish, is not pro-life.

President Obama’s executive action may be imperfect, but it’s action: something we haven’t seen from the GOP.

While some focus on gun control to reduce gun violence, others point to the breakdown of the family, and still others blamed atheism, we suggested looking at capitalism some time ago.

Ask your Republican Senators and Representatives to support an increase in funding for services treating mental illness and substance abuse if they manage to stay in office and fail to do anything else.

Do something to stop gun violence and be a prophet of peace.

A blessed Solemnity of Mary, the Mother of God to you all!

* You’ll remember that S. 649 failed to get past the Senate with all but four Republicans voting against it. You will also remember the event some months prior that helped lead to to S.649, the killing of 26 beautiful children at Sandy Hook elementary school in Connecticut.

^ Given where the US Bishops stand, where do our GOP contenders stand? If Ben Caron‘s campaign is still alive, where does he stand? 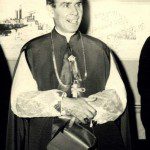