Does InterVarsity Endorse All of Black Lives Matter

The news is fairly stale at this point, but the indicators of support for Black Lives Matter at Urbana, the annual meeting of InterVarsity Fellowship, did attract headlines. Here is part of Christian Century‘s coverage:

Given that location, as well as InterVarsity’s commitment to both social justice and the diversity of its students (more than a third are ethnic or racial minorities), it was not surprising that there was some mention of racial inequality. But InterVarsity went further.

Then Michelle Higgins took to the stage. Higgins directs Faith for Justice, a Christian advocacy group in St. Louis (she also serves as worship director at South City Church).

She’s active in the Black Lives Matter movement in the St. Louis area, and she challenged the students to listen to the stories of the movement and get involved.

Because of Black Lives Matter’s anti-police rhetoric (if not policy), Ed Stetzer was glad that the president of InterVarsity clarified its support:

InterVarsity’s support for Black Lives Matter caused controversy—in part because of some of the speaker’s comments were perceived as critical and dismissive of the pro-life movement.

Last week, InterVarsity’s interim president, Jim Lundgren responded in a statement. “Scripture is clear about the sanctity of life,” he said. “That is why I’m both pro-life and committed to the dignity of my Black brothers and sisters.”

In that statement, InterVarsity distanced themselves from the anti-police rhetoric. (As one who comes from a law enforcement family, I was thankful for the clarification.)

But what do Stetzer and Lundgren think about Transgenders and Queers, the affirmation of each which is part of Black Lives Matter. At BLM’s website under Transgender Affirming, they would read:

We are committed to embracing and making space for trans brothers and sisters to participate and lead. We are committed to being self-reflexive and doing the work required to dismantle cis-gender privilege and uplift Black trans folk, especially Black trans women who continue to be disproportionately impacted by trans-antagonistic violence.

And under Queer Affirming this:

We are committed to fostering a queer‐affirming network. When we gather, we do so with the intention of freeing ourselves from the tight grip of heteronormative thinking or, rather, the belief that all in the world are heterosexual unless s/he or they disclose otherwise.

Maybe Michelle Higgins and Jim Lundgren support greater freedom for transgendered persons and queers, though I suspect InterVarsity’s constituency would not regard liberation from “heteronormative thinking” part of God’s mission of truth. Even aside from the apparently inflammatory aspects of Black Lives Matter’s principles, some who support justice for African-Americans and oppose police brutality may wonder legitimately what Caitlyn Jenner or Dan Savage have to do with Freddie Gray or Tamir Rice. 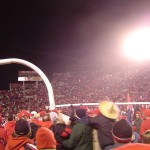 January 8, 2016 Should Reading the Bible Feel Like Exercise?
Recent Comments
0 | Leave a Comment
"I can never keep myself from being annoyed by the disingenuousness of the "complementarian" label. ..."
NorrinRadd Are Complementarians America’s Taliban?
"All of the LGBTQ sexually are mentally ill ( have a depraved mind ). And ..."
D.M.S. Being Evangelical, Being Gay
"What did he contribute?"
Roger McKinney Is David French the Best Judge ..."
"That's because French was and is part of the "Cult of Bush.""
Johnny Davis Is David French the Best Judge ..."
Browse Our Archives
Related posts from Putting the Protest in Protestant