Even A Liberal Theocracy is Still Theocratic

Alan Cross has to assert several times that in arguing for Christian involvement in politics, he is not advocating theocracy. But the question is how, once you uphold the Bible as a standard for even some parts of social life, you stop from applying biblical morality to everything? Is it possible to have only some of the Bible, to cut out the pieces we don’t like, the way Thomas Jefferson did?

Cross, to be clear, was arguing against Jerry Falwell, Jr. The president of Liberty University said the following and received a lot of criticism:

Cross’ response went to the Sermon on the Mount:

The function of salt is to season and preserve. The function of light is to illuminate. The church is to speak prophetically to the earthly powers about the character of God and what the Scriptures say.

It does this not to dominate the earthly world, or to create a theocracy, but to witness to the realities of what we believe is the better way of Jesus. Witnessing the realities of the Kingdom of God is not just about how to be to be forgiven of sin and how to become a Christian through faith in Jesus. It also involves proclaiming and demonstrating to every facet of human life and society, including the political sphere, the ways that Jesus calls us to live.

There is the first insistence that being salt and light is not theocratic.

When he quotes John Adams, he has to stamp his anti-theocratic foot again:

John Adams wrote, “We have no government armed with power capable of contending with human passions unbridled by morality and religion. Avarice, ambition, revenge or gallantry would break the strongest cords of our Constitution as a whale goes through a net. Our Constitution is designed only for a moral and religious people. It is wholly inadequate for any other.”

I don’t think that Adams was talking about the church being sanctioned by the state or pining for theocracy. He was saying that our system of government works best when religious and moral people exert influence in appropriate ways, because you cannot possibly write down enough laws to govern the affairs of men who hold themselves apart from the judgements of a Higher Power.

Then, one more time for feeling, came Cross’ call for the church to speak out on social matters:

But, the church also has a role to play to guide the state morally and ethically through prophetic witness. If the church is subverted to the state in acquiescence, all manner of evil can proliferate without a check. But, when the church upholds the good and denounces the bad and calls our leaders to repentance—that is for the good not just of individuals or the church, but also for all of society. Whether our leaders like it or not.

That isn’t the establishment of a theocracy. It’s just the church being the church in a free society.

The problem is that Cross wants the church to speak out only on parts of what the Bible instructs. For instance, the Ten Commandments cover the sorts of morals that protect human life, property, honesty, families, and marriage. That all sounds relatively good for the commonwealth, although where Christian sexual morality takes you with gay marriage is a bit sticky. But I’m sure Cross would call for Christians — and defend their freedom — to object to gay marriage based on the Bible’s teaching.

But what about the first four (by Reformed Protestant count) commandments. What about false worship and blasphemy, which is partly in view in the first three commandments. Let’s not even talk about how the church would look if instead having Super Bowl parties, they spoke out against profaning the Lord’s Day (fourth commandment) and lobbied Congress to force the NFL to play on a different day.

Keep in mind that in conservative sectors of evangelicalism, for instance, Mormonism is a heresy. Jared C. Wilson, a Southern Baptist who works in The Gospel Coalition circles, recently wrote this about Mormonism:

There are other interesting departures from orthodoxy to be found in LDS teaching—what they believe about the Bible and ongoing revelation, what they believe about pre-existing human beings, about Jesus coming to North America to minister to the Native Americans, etc.—and lots of questions to suss out about Mormonism’s prophetic and historiographical claims. (The historical record is not kind to the former, when you begin to honestly appraise the character of Joseph Smith in particular, and the archaeological record is not kind to the latter.) But the bottom line is that on four very key points of Christian orthodoxy, Mormonism utterly fails the test. . . .

I know too many Christians are prone to throwing around the “heresy” word in a willy-nilly fashion at anyone who disagrees with them. Preachers who talk about social justice or have rock-and-roll worship on stage are called “heretics.” But the word has an historical legitimacy. It does apply to some beliefs that depart from the faith once delivered. And the historical record of creeds and councils of the Christian church is clear, as is the word of God from which they are deriving their theological guardrails: if you deny the traditional doctrines of the deity of Christ and of the triune Godhead and mess with salvation by grace, you are indeed a heretic.

If I put Cross’ anti-Falwell piece together with Wilson’s anti-Mormon piece, I compute that the church, in its capacity as salt and light, is to warn government about the dangers of religious liberty because those conditions allow heresy to flourish.

I doubt Cross wants to go that far. That would be a theocracy. But if he is uncomfortable with the church speaking out about heresy and idolatry in politics and society, why not a similar discomfort with the church speaking out on other matters? Using the Bible or church teaching as a standard for public policy is not liberal (in the classical sense). Cross seems to call for the church to be anti-liberal on some of the Bible’s teaching but not on the other. That is odd.

The alternative is to adopt a two-kingdom position. Two-kingdom advocates may not care for Falwell’s use of it or for it’s apparent blessing of Donald Trump. But is that any worse than Christians who call for the church to heed biblical teaching and speak out on political matters then telling the church, in the next breath, not to speak out on political matters (like freedom of worship)? 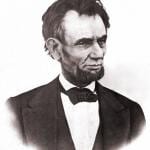 February 12, 2019
If Abraham Lincoln were Donald Trump
Next Post

February 22, 2019 What's Good for Lincoln Is Good for Washington
Recent Comments
0 | Leave a Comment
Browse Our Archives
get the latest from
Putting the Protest in Protestant
Sign up for our newsletter
POPULAR AT PATHEOS Evangelical
1